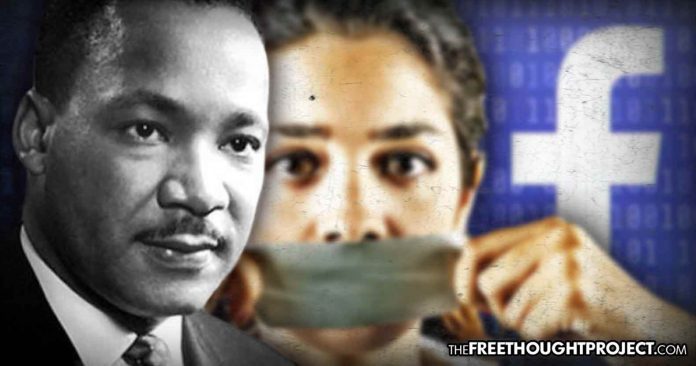 50 years after the assassination of Martin Luther King Jr., his struggle for peace lives on.

When most people think of the great man, born Michael King on January 15, 1929, they see an advocate for peace, who is celebrated by the US government — honored every year in January, on the third Monday.

However, what the government tells us and what this great man did are two separate stories and had Dr. King been alive today, he would have been an enemy to the establishment who would have made every move they could to silence him.

Dr. King’s position as the leader of the Civil Rights Movement began after his election as spokesman for the Montgomery Improvement Association in December of 1955. What also started in that December of 1955 was the FBI’s investigation into him.

Like all those who stand against government-sanctioned violence, Dr. King was an enemy of the state. The fact that he’s celebrated today by the same state that persecuted him is quite Orwellian.

According to a report out of Stanford University titled, Martin Luther King, Jr. and the Global Freedom Struggle, the FBI had it out for Dr. King as soon as he began making waves.

The U.S. Federal Bureau of Investigation (FBI) began monitoring Martin Luther King, Jr., in December 1955, during his involvement with the Montgomery bus boycott, and engaged in covert operations against him throughout the 1960s. FBI director J. Edgar Hoover was personally hostile toward King, believing that the civil rights leader was influenced by Communists. This animosity increased after April 1964, when King called the FBI ‘‘completely ineffectual in resolving the continued mayhem and brutality inflicted upon the Negro in the deep South’’ (King, 23 April 1964). Under the FBI’s domestic counterintelligence program (COINTELPRO) King was subjected to various kinds of FBI surveillance that produced alleged evidence of extramarital affairs, though no evidence of Communist influence.

With a state that owes its very existence to the monopoly it holds on the use of violence, anyone who is pro-peace is a potential threat. This was the case in the 20th century just as it is the case in the 21st century. The fact that Americans take off of work one day in January, does not negate the reality that this struggle continues.

In fact, the government is still very engaged in fighting the antiwar and pro-peace narrative King so eloquently espoused. And they have no qualms talking about this in the open.

After deleting the pages of hundreds of antiwar and pro-peace media and activist outlets in October, last week, Facebook made another giant move to silence. This time, they had no problem noting that they went after pages whose specific missions were “anti-corruption” or “protest” movements.

“Some of the Pages frequently posted about topics like anti-NATO sentiment, protest movements, and anti-corruption,” Facebook’s head of cybersecurity policy, Nathaniel Gleicher wrote in the blog post. “We are constantly working to detect and stop this type of activity because we don’t want our services to be used to manipulate people.”

Facebook purged hundreds more pages today. This time, they claim it is folks who are "anti-corruption" and who "protest" who are the problem. To the ministry of truth, standing against criminal politicians is now deemed a crime. Shit is getting serious.https://t.co/LXXGTNRuHL pic.twitter.com/KxN78otrOV

Make no mistake, because Dr. King broke through the divisive paradigm and bridged the gap between different cultures so well, he would undoubtedly been a target of these tech giant censors who aim to keep you divided. The Atlantic Council would have likely had a special committee devoted to solely silencing his “dangerous” talks of peace.

Like Dr. King, however, many activists of today are unafraid of speaking truth to power, even when faced with police action and censorship.

“There may be some tear gas ahead. But I say to you today, that I’d rather die on the highways of Alabama, than make a butchery of my conscience,” said Dr. King in his famous speech just prior to the Selma-Montgomery march in which protesters were met with such violence from police that the day would be forever remembered as “Bloody Sunday.”

The first march took place on March 7, 1965, and it gained the nickname “Bloody Sunday” after its 600 marchers were attacked at the Edmund Pettus Bridge after leaving Selma; state troopers and county posse attacked the unarmed marchers with billy clubs and tear gas.

Does this type of police reaction to protests sound familiar?

Dr. King was no stranger to police and being arrested, in fact, during his 12-year run as the leader of the civil rights movement, he was arrested 30 times.

Today, there is a good chance Dr. King would be referred to as a ‘thug’ by a large portion of society — and police — for his activism.

Dr. King, like many of the protesters of today, stood against state violence and war. Those who wage the wars and initiate the violence, delegating a single day in January to honor a man who stood against their very tactics, is defamatory to this struggle for peace, to say the least.

So, while you are out there today, enjoying the day off, remember that this struggle is far from over. There are countless individuals continuing to try to live in the way Dr. King advocated for and who face constant bombardment from the establishment for doing so.

As long as innocence is lost to those who claim to protect it, the conflict remains. As long as people of all races are harassed, kidnapped, locked in cages or killed over victimless crimes, our strife will persist.

Not until the corruptions ceases, not until all the troops are brought home, not until a person can do with their own body as they see fit, not until the brute force changes to compassion, will the perpetual struggle of Dr. King and all those before and after him, be complete.

“Peace is not merely a distant goal that we seek, but a means by which we arrive at that goal.” – Martin Luther King, Jr.