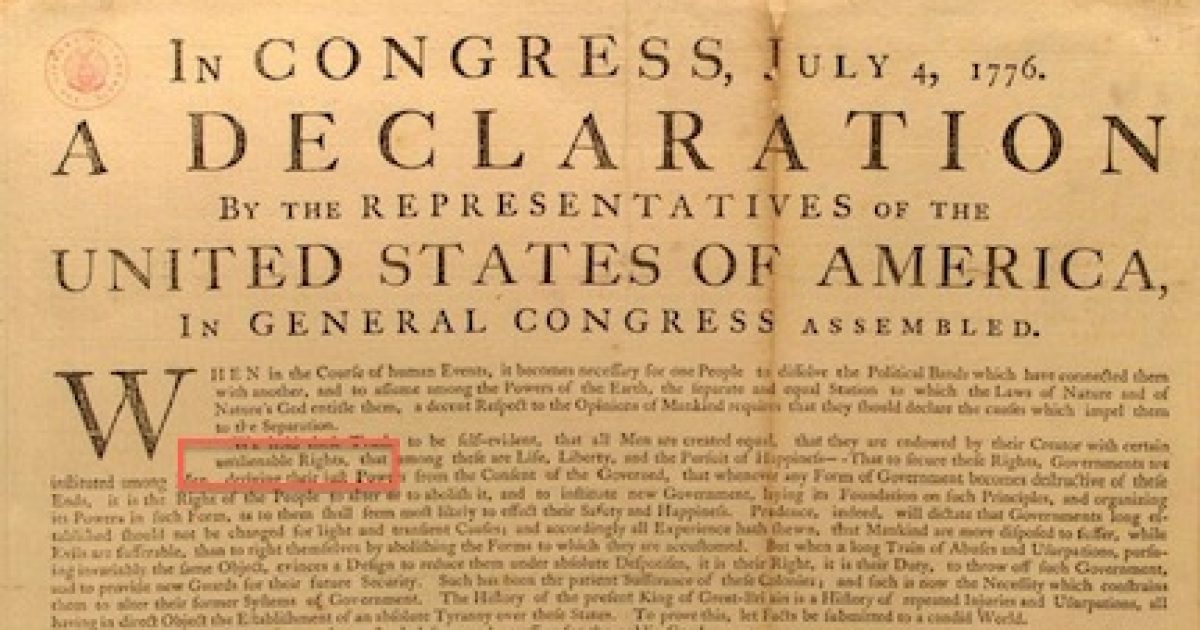 Imagine you were playing football against a very determined opponent and a new rule was introduced. According to this new rule of play, your team could actually never have possession of the football. Every time you received a kick-off, or recovered a fumble, or intercepted a pass, or even when you took over on downs, play would stop immediately and possession of the ball would be returned to the other team.

In this scenario, you couldn’t possibly win, because you need the ball to score.

In the same way, if we try to argue for our rights to life, or for our liberties, or for the right to be free in our pursuit of happiness—including our right to own and enjoy private property, and including our right to worship, and to speak freely, and to assemble, and to protect and defend ourselves and our family—and we try to make these arguments and defenses without acknowledging that their origin is a Divine one, we are trying to score without the ball.

It’s impossible to make a case for your individual rights without first acknowledging—as our founders did in the Declaration of Independence—the existence of a Creator God, Who is the author of those rights.

In my education work, I frequently speak to patriotic groups, and I’m asked by some of the more libertarian bent if it’s really necessary to emphasize Jesus Christ so much in talking about our rights and how to redeem them and secure them.

This is because, if we don’t start with Christ as the Creator and author of rights, we have no rational or logical basis for asking others to respect them.

This is why those who seek to deprive us of our rights have first made sure to erase the memory of their origin from our cultural conscience. This is what the great lie of separation of Church and State has accomplished in America.

Don’t let them lie to you. There is no mention of separation of Church and State in the Constitution, but more importantly, there can be no separation of God from government, because He created it to secure the unalienable rights He created you with.

Trying to argue for your rights without a Supreme Right Giver is like trying to score without the ball, no Jesus, no rights—Game over!