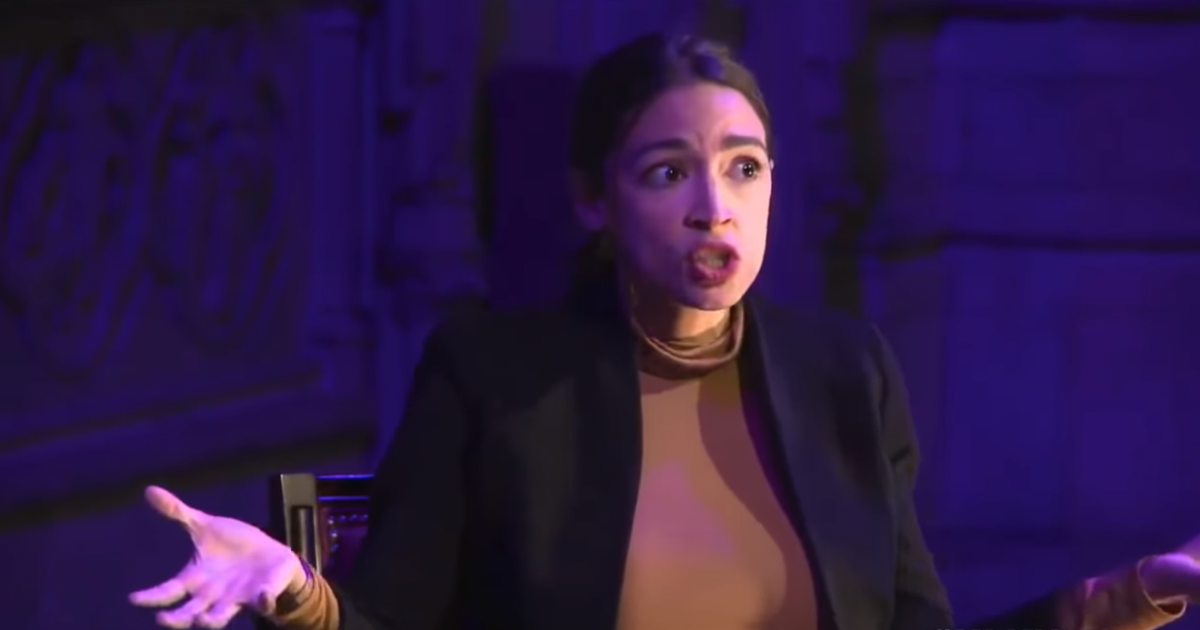 Sometimes, I wonder if we aren’t succumbing to a plot to give this woman more face time due to her utterly stupid and ignorant statements, but still, addressing the woman who has apparently been loosed from an insane asylum with no grasp of economics or apparently the Constitution, will be a tedious task over the next four years.  In her latest bizarre, out-of-the-Twilight-Zone comments, Rep. Alexandria Ocasio-Cortez (D-NY) claimed that the world would end in twelve years if climate change wasn’t addressed and that she gives “zero f*cks” about those saying she shouldn’t make waves in DC.

On Martin Luther King, Jr. Day, Ocasio-Cortez appeared at the fourth annual MLK event at Riverside Church in Harlem and warned the crowd in attendance that climate change would be the death of the world in twelve years if it wasn’t addressed.

The New York congresswoman said that this was the “World War II” for millennials and Gen Z.

“And I think the part of it that is generational is that millennials and people, in Gen Z, and all these folks that come after us are looking up and we’re like, the world is gonna end in 12 years if we don’t address climate change,” she said. You’re biggest issue, your biggest issue is how are going to pay for it? — and like this is the war, this is our World War II.”

OK, there is just too much silliness going on here.  First, there is no evidence, not one shred of evidence to what she is saying.  In twelve years, she’s gonna look like Al Gore did when what he prophesied failed to come to pass.  She’s already sounding worse than he did back in the day.

Man cannot destroy the earth in such a manner, and if he could, do you really think taxing people 70 percent of their own money is going to change that outcome?  What can men do to stave off the “chicken little” scenario, Ms. Ocasio-Cortez?  Nothing, absolutely nothing.

Additionally, I got a bit of a chuckle in her saying, “Your biggest issue is how are going to pay for it?”

Well, Alexandria, you just… pay for it, dontcha know?  I mean, wasn’t that her response before for all the government theft of people’s money to pay for other people’s stuff, including education and health care?  Why yes, it was.

This isn’t all.  She also said that the US needs to pay “reparations” like Germany did “after the Holocaust” if it wants to heal: “Until America tells the truth about itself, we are not going to heal.”

Socialist Rep. Alexandria Ocasio-Cortez (D-NY) suggests that the U.S. needs to pay “reparations” like Germany did “after the Holocaust” if it wants to heal: “Until America tells the truth about itself, we are not going to heal” pic.twitter.com/NlFWwtFH4u

Please!  The two things she is referring to are not even in the same century or category.

However, that is not all Ocasio-Cortez had to say.  Because she is young and energetic, she is ready to take on the world, and that can be a good thing, if you actually have rational, lawful, and thoughtful ideas.  I would support her “making waves” over going back to the Constitution, limiting government and being fiscally sound.  I would be totally behind her, but that isn’t that case.

When asked on The Late Show With Stephen Colbert on Monday how many f**ks she gives about those telling her to wait her turn and not make waves in DC, Ocasio-Cortez said she gave “zero.”

‘She then went on to defend her Socialist, and I might add ridiculous, tax scheme to tax 70 percent of the wealthy people in the US.

“It’s on your ten-millionth-and-one dollar,” Ocasio-Cortez explained. “At what level are we really just living in excess? And what kind of society do we want to live in? And do we want to live in a city where billionaires have their own personal uber helipads when people are working 80 hour weeks and can’t feed their kids?”

OK missy, how much of your nearly $200,000 salary are you just giving away?  Hmmm? Weren’t you the same person that said with that kind of cash, you couldn’t even find an apartment in DC?  Yep, you sure were.

“I have three months without a salary before I’m a member of Congress. So, how do I get an apartment? Those little things are very real,” Alexandria Ocasio-Cortez said to The New York Times. “We’re kind of just dealing with the logistics of it day by day, but I’ve really been just kind of squirreling away and then hoping that gets me to January.”

There are many little ways in which our electoral system isn’t even designed (nor prepared) for working-class people to lead.

Seriously, you just pay for it Alex!  After all, we know you actually came from money anyways.

When you start leading and stop mouthing about other people’s money, then I might be inclined to give ear to your ideas, which have never worked in history.  However, I’ll still reject them because of that fact:  They have never worked.

In fact, actor James Woods reminded everyone of what happened the last time a tax margin of 70 percent was put in place in America.

‘Millennials and Gen Z won’t even remember that because they weren’t around, but let them sit at the gas pumps for hours of their lives while they feel good about using people like Ocasio-Cortez to steal for them to get health care, college and a host of other goodies for free, and perhaps they might just rethink things.