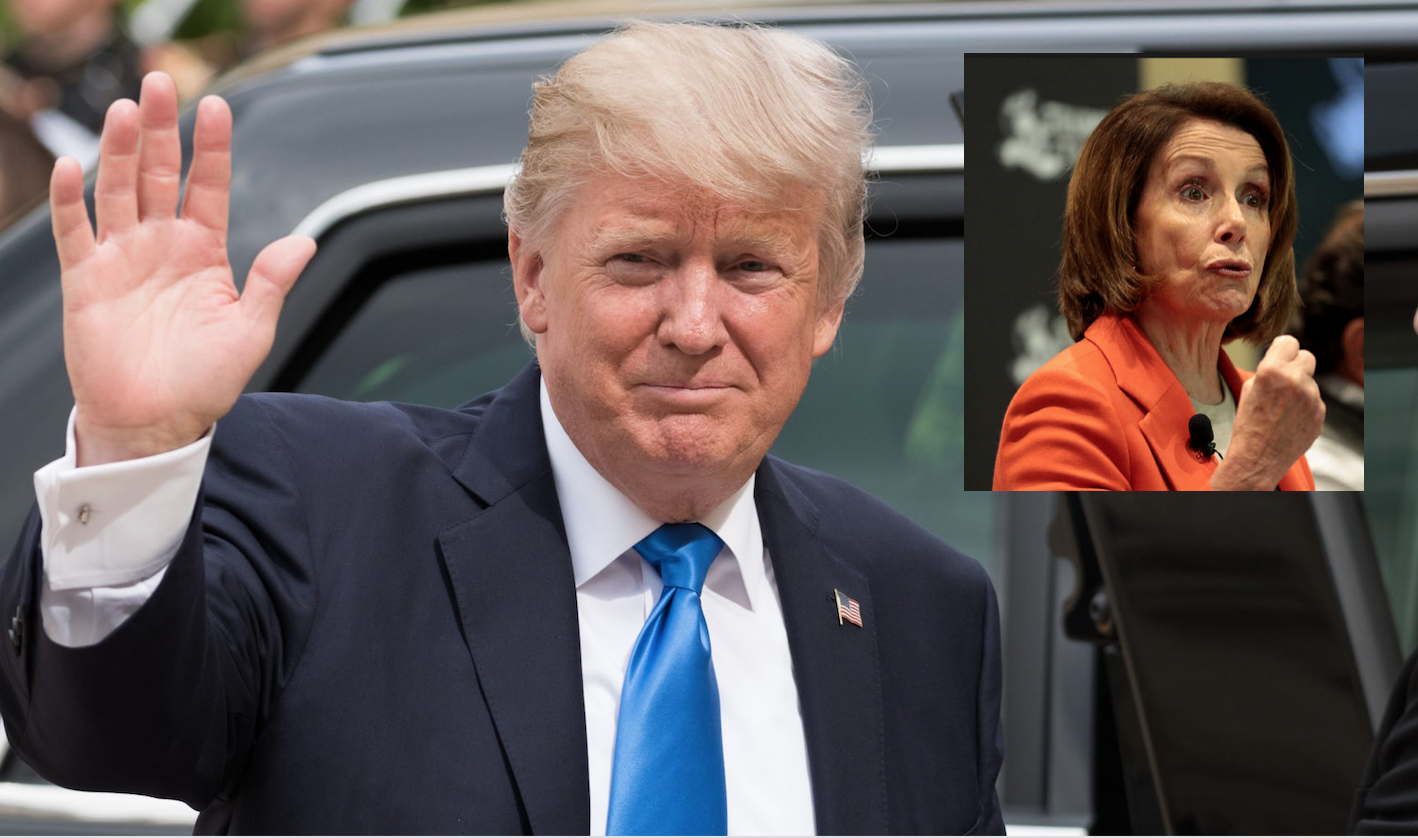 With all the hoopla surrounding the SOTU, millions more will watch. Trump trumps them again.

TRUMP TAUNTS PELOSI: I’M GIVING MY SOTU IN THE HOUSE

The president says his speech should be ‘delivered on time, on schedule, and very importantly, on location!’

House Speaker Nancy Pelosi on Wednesday said she would not pass a resolution allowing President Donald Trump to deliver his State of the Union address from the House chamber until the government reopens, rebuffing the president’s statement that he would move forward with the speech regardless.

“I look forward to welcoming you to the House on a mutually agreeable date for this address when government has been opened,” Pelosi wrote to Trump is the latest volley between the two leaders.

President Donald Trump on Wednesday rejected Speaker Nancy Pelosi’s request to delay his State of the Union speech until after the government shutdown ends, intensifying the brinkmanship between the two leaders that has become a centerpiece of the ongoing funding impasse.

Trump said he fully intends to give the annual address in the House on Jan. 29 as was originally planned, a defiant rebuttal to Pelosi’s letter last week suggesting the president postpone the speech — or deliver it in writing — until the funding stalemate was resolved.

“I look forward to seeing you on the evening on January 29th in the Chamber of the House of Representatives,” Trump wrote in the letter, his first official response to Pelosi’s missive last week. “It would be so very sad for our Country if the State of the Union were not delivered on time, on schedule, and very importantly, on location!”

“Stay tuned, that is my message to all of you,” Pelosi told reporters Wednesday after Trump released the letter.

Technically Trump cannot give the State of the Union in the House without Pelosi’s consent. While she has yet to rescind the invitation she sent in early January — her letter last week was only a strong suggestion he move the date — both the House and Senate have to adopt a joint resolution before the speech can take place. While typically just a formality, Pelosi can block the resolution and Trump in the process.
The most reliable politics newsletter.

Sign up for POLITICO Playbook and get the latest news, every morning — in your inbox.
Email

By signing up you agree to receive email newsletters or alerts from POLITICO. You can unsubscribe at any time.

House Minority Leader Kevin McCarthy introduced a resolution after Trump’s letter to hold the State of the Union Jan. 29.

“I don’t think anybody in America would agree with that position,” McCarthy said when asked what if he would do if Pelosi officially rescinded the invitation.

Two White House officials said they believe they have the upper hand in the State of the Union standoff because Pelosi hasn’t been able to definitively show that the shutdown has prevented the government from securing the event. As the White House officials see it, Pelosi will either buckle and allow Trump to speak or be forced to publicly un-invite him. Trump wins in either scenario, the officials argued, insisting that barring him from giving the speech would be seen as obviously political and petty.

White House aides have encouraged the president to continue fighting to hold the speech in the House chamber because backing off would make it look like he gave in. But they’re also already making contingencies for a speech outside of Washington, according to one of the White House officials, if he’s not able to give the speech in Congress. And outside advisers think an alternative speech outside of the beltway would resonate with his base.

“I think it would be remarkably petty of the speaker to disinvite the president of the United States to address the nation that they both serve at the highest level,” Conway said on Fox News.

The letter from Trump is just the latest tit-for-tat in a public sparring match that has intensified between Pelosi and the president over the last week. First Pelosi surprised Trump by sending the letter suggesting he delay the State of the Union. Trump responded by canceling Pelosi’s planned trip to Afghanistan at the last minute, about an hour before she and other Democrats were set to depart.

Before Trump sent his letter Wednesday, Pelosi was discouraging fellow Democrats from flying out family members or other guests to the speech, without tipping her hand as to whether she was officially canceling the event.

“I wouldn’t make a plans for family to come to the State of the Union, even if it happens,” she told lawmakers in the closed-door meeting, according to a source in the room.

“I would say, without any inference to be drawn from it as to whether I think he’s coming or not, government should still be open…I wouldn’t spend any money to come out here.”

In her letter last week, Pelosi cited the shutdown — now the longest ever in its 33rd day — as the reason to postpone Trump’s speech, saying the stalemate has hobbled both the U.S. Secret Service and the Department of Homeland Security and could harm the security planning process.
Michael Cohen

But on Wednesday, Trump rejected Pelosi’s explanation and said he has been contacted by DHS and Secret Service officials who said “there would be absolutely no problem regarding security with respect to the event,” something DHS Secretary Kirstjen Nielsen first said last week.

House Majority Leader Steny Hoyer (D-Md.), Pelosi’s deputy, also said the speech — which is attended by lawmakers, Cabinet secretaries and many Supreme Court justices — could go forward at the last minute if Pelosi and Trump reached an agreement to do so.

“The Capitol police and the sergeant at arms has assured us we’ll be fully prepared if in fact there is a State of the Union address on the 29th,” Hoyer said, adding that a joint resolution could be passed the day of the address if necessary. “The speaker and the president are the two parties here that need to speak to it.”

Later, after the Trump’s letter was made public, Hoyer refused to comment further.

“You need to talk to the speaker,” he told reporters repeatedly.

The White House and Democratic leaders have failed to make any meaningful headway in ending the shutdown. Trump has refused to back down from his demand for $5.7 billion for border wall funds.

Democrats have so far not budged in their refusal to appropriate the funds but House Democratic leaders are weighing a counteroffer to Trump that would likely include several billions of dollars for border security without funding the wall.

The president’s letter comes several days after he tweeted that “there are so many options” to still deliver a State of the Union address. However, he also teased that he may follow through on Pelosi’s initial invitation to deliver the address on Capitol Hill.

“While a contract is a contract, I’ll get back to you soon!” Trump tweeted Sunday.