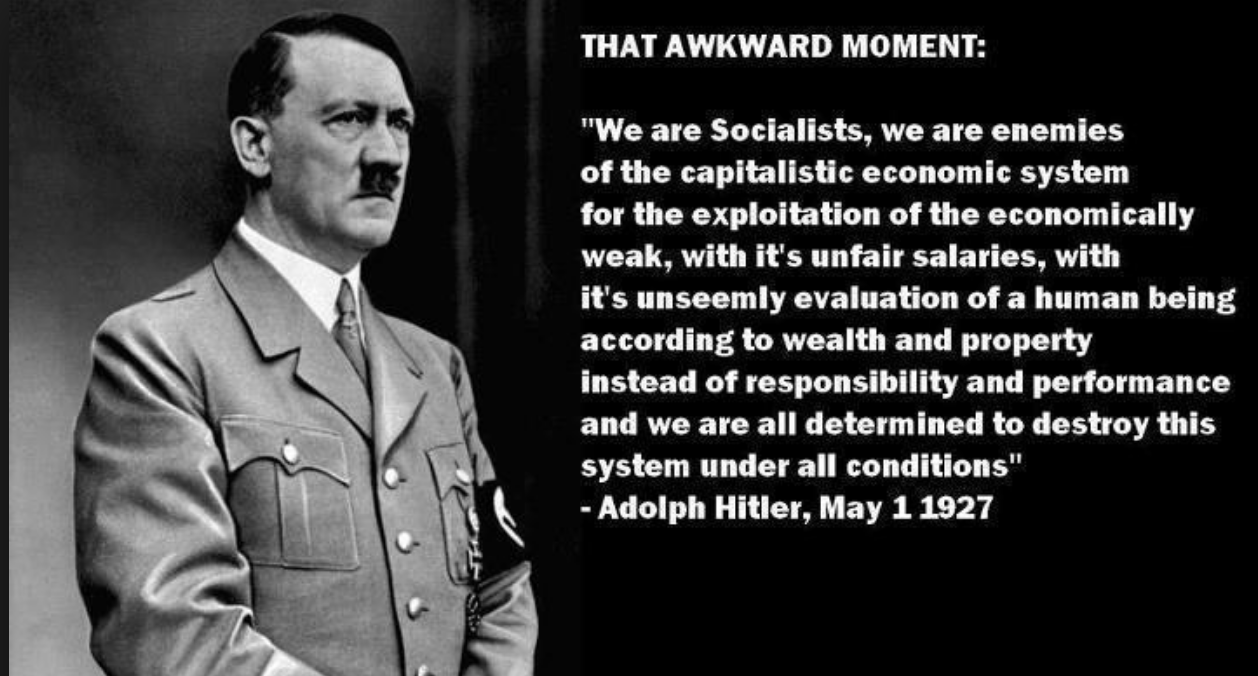 To put it quite clearly: we have an economic programme. Point No. 13 in that programme demands the nationalisation of all public companies, in other words socialisation, or what is known here as socialism. … the basic principle of my Party’s economic programme should be made perfectly clear and that is the principle of authority… the good of the community takes priority over that of the individual. But the State should retain control; every owner should feel himself to be an agent of the State; it is his duty not to misuse his possessions to the detriment of the State or the interests of his fellow countrymen. That is the overriding point. The Third Reich will always retain the right to control property owners. If you say that the bourgeoisie is tearing its hair over the question of private property, that does not affect me in the least. Does the bourgeoisie expect some consideration from me?… Today’s bourgeoisie is rotten to the core; it has no ideals any more; all it wants to do is earn money and so it does me what damage it can. The bourgeois press does me damage too and would like to consign me and my movement to the devil.

There is a difference between the theoretical knowledge of socialism and the practical life of socialism. People are not born socialists, but must first be taught how to become them.

Socialism as the final concept of duty, the ethical duty of work, not just for oneself but also for one’s fellow man’s sake, and above all the principle: Common good before own good, a struggle against all parasitism and especially against easy and unearned income. And we were aware that in this fight we can rely on no one but our own people. We are convinced that socialism in the right sense will only be possible in nations and races that are Aryan, and there in the first place we hope for our own people and are convinced that socialism is inseparable from nationalism.

Adolf Hitler “Why We Are Anti-Semites,” August 15, 1920 speech in Munich at the Hofbräuhaus.

Actor Ben Stein dropped some hard truths about the promises being peddled by some of the new members of Congress, including Congresswoman Alexandria Ocasio-Cortez (D-N.Y.).

The newly elected congresswoman was a member of the Democratic Socialists of America and a lot of her political talking points can be traced back to these socialist roots: Medicare-for-all, mobilizing the economy to fight climate change, and elevating the marginal tax rates for the wealthy.

Looking at it from a historical lense, Stein told Fox Business that many of the promises of Ocasio-Cortez were delivered by some of the worst figures in history.

“We have a society, live in a society in which there are an awful lot of people who have no idea that Stalin, Hitler, Mao Zedong, all came to power promising the same kinds of things that Ms. Ocasio-Cortez is promising. And it led to mass murder. It led to dictatorship. It led to genocide. These promises are all promises and they unvaryingly lead to bad things. The promise of just saying to people ‘do what you can within the law to make your life better and your family’s life better.’ That system works extremely well.”

As Stein noted, there are many Americans who aren’t aware of some of the more ghastly figures in history. For example, two-thirds of millennials don’t know what happened at Auschwitz according to a report by the Washington Post. Another study showed millennials also believed that former President George W. Bush killed more people than Stalin.

Stein also expressed concern at the percent of Americans who view capitalism as a bad thing. As IJR previously reported, more Democrats have a higher opinion of socialism than they do of capitalism.

“Capitalism is a system that allows people to make something of themselves instead of oppressing other people,” Stein said. “It’s an incredibly good system. Making money is one of the most harmless things there is to do in the whole world and that’s what our society’s about.”

“What do you do if a person is a richer or poorer person? What do you do? Do you take him away? Do you shoot him? Well, that’s what the communists tried, it didn’t work out very well for them. And at the end of the day, it wound up Russia’s one of the most unequal societies there’s ever been in the world.”