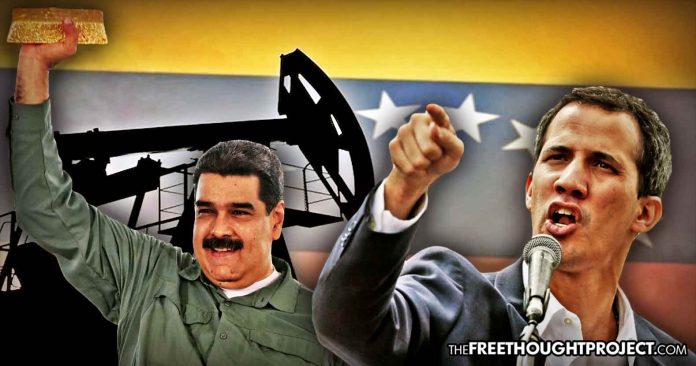 The decades-long US infatuation with Venezuela came to a head on Wednesday as the United States, Canada, Brazil, and others all declared a man who never even ran for the office of presidency, much less got elected to the office, as the president of Venezuela.

On Wednesday, Juan Gerardo Guaidó Márquez took a public oath of office and swore himself in as the President of Venezuela. He assumed this office with zero democratic process—essentially making himself a dictator—and was immediately declared legitimate by Washington.

This move by Washington to recognize Guaidó as the official president is a page out of the book they’ve used over the last two decades to invade and destroy countries like Iraq, Libya, and Syria. The exact same rhetoric from the bipartisan warmongers in DC is being put out once more as shills like Marco Rubio threaten all out war. All of the sudden, Trump’s haters are coming together in solidarity, seething with their warmongering mucus over the  potential for a Venezuelan conflict.

U.S. diplomats in #Venezuela should present their credentials to President @jguaido. Maduro has no authority to expel anyone.

And trust me on this one, if Maduro is stupid enough to test @realdonaldtrump by harming any U.S. diplomat, the consequences would be swift & severe.

For those who don’t remember, nearly the exact same tactics were used just before the US invaded Libya and turned this bastion of hope in Africa into a terror-infused hell-state in which human slaves are now openly sold in public.

Just like Guaidó claimed to be president and was recognized by the US, in Libya, the head of the Libyan National Transitional Council, Mustafa Abdul Jalil threatened mass deaths if the West did not intervene and was quickly given control. Days later, the Libyan NTC was officially recognized as the Libyan government and the Gaddafi regime was out. Days after this, NATO powers, led by the US, proceeded to turn Libya into the war ravaged hell hole it is today.

As we look at Venezuela, let's remember the last time Marco Rubio knocked off a regime he didn't like and how that turned out. Fair is fair. pic.twitter.com/NMG07tuR8y

In the next few days, you can expect this move by the US to stoke potential for a civil war in Venezuela which would draw in other countries like Cuba and Brazil. The result of this potential civil war would be utterly catastrophic.

The Russian Foreign Ministry agrees and responded on Thursday to Washington’s recognition of Guaido as president, noting that it  “is aimed at deepening the split in Venezuelan society, increasing the conflict on the streets, sharply destabilizing the internal political system and further escalation of the conflict.” The Ministry then repeated claims it made just before the US invaded Syria and Libya by saying similar action in Venezuela would be “fraught with catastrophic consequences.”

The move by Washington and others even prompted a response from Putin himself on Thursday who said, according the Russian state media outlet, RT, that “foreign interference in Venezuela’s internal affairs grossly violates international law.”

To those who think this is about Nicolás Maduro, think again. No one here is arguing that Maduro is an angel. No one here is saying that his election wasn’t surrounded in controversy. And, no one here is claiming that the people of Venezuela do not have a right to contest his presidency. But to ignore every president’s meddling in the country since George W. Bush and the US desire to overthrow Hugo Chavez for a decade before this would be incredibly naive.

TFTP has long reported on the crimes against the Venezuelan people by the state. We have reported on the mass killing of citizens by police, the loyalists being armed while the opposition was disarmed, and the disturbing police state the country has become. But the current situation in Venezuela would look like a paradise compared to what will likely ensue following Western intervention.

I’m no expert on Venezuela but I’m pretty sure you can think Maduro is a horrible/bad/authoritarian president *and* also think it’s bad for the US to back coups or regime change there.

Venezuela is not a tyrannical autocracy and its crisis is NOT organic; it is a deeply divided and polarized society—which the US is exploiting for special interests.

And no, socialism alone did not create the horrific plight currently faced by the Venezuelan people. Decades of sanctions and meddling have proven to be unbelievably effective at hurling their economy into a whirlwind of chaos, collapsing their currency, and cutting them off from the rest of the world—literally starving them to death.

Venezuela has 2.5 billion dollars withheld in international banks as a result of US sanctions. This money would be used to import medicines and food. https://t.co/O0mdskpU7y

Make no mistake, this has likely long been the plan. As George Galloway, former 30 year member of the British Parliament noted, “before they drop the bombs, they drop the narrative, of course. And the disinformation bombardment in Venezuela has been one of the longest bombing runs in history. Massive sums of US money have been spent on media distortion, subversion, sabotage, military coups, and threats of invasion throughout the Chavez-Maduro era.”

For those who may be unaware, the proven oil reserves in Venezuela are known to be the largest in the world, totaling 297 billion barrels. In December, Caracas and Moscow signed a $5 billion investment deal to raise Venezuela’s oil production by one million barrels per day. This move was done to counter the effects of US sanctions which have been crippling the country and raised many neocon eyebrows.

What’s more, aside from their proven oil deposits, Venezuela is also known for its extremely rich gold deposits. Also in December, Caracas gave the green light to Russia to begin mining gold inside their country.

“As for Russia’s participation in gold-mining or other mining projects, Venezuela has made a wide range of interesting proposals that are currently under consideration by interested Russian operators,” the ambassador said.

Because of their rich deposits and need to subvert US sanctions and a weaponized US dollar, Venezuela has become the 25th largest holder of gold in the world making them a direct threat to the global banking system.

To think that the US interests in Venezuela are purely humanitarian is not only asinine but it blindly ignores decades of US interventionism highlighting the contrary—especially considering what happened in Libya.

As TFTP has previously reported, on October 20th, 2011, the West took it upon itself to use NATO to overthrow Gaddafi — not for any humanitarian threat to civilians as had been repeatedly claimed and is the alleged impetus behind the coup in Venezuela — but because his planned roll-out of a new currency to be used across Africa posed a palpable existential threat to central banks at the heart of the Western financial and political system.

In fact, before Washington’s endorsement of Guaido, Venezuela was carrying out a similar plan. President Recep Tayyip Erdogan recently launched a gold trade with Maduro. But this was not simply moving gold from one place to another. Maduro announced that he was moving his entire refining operation directly to Turkey in a direct move against the Western monetary controlled sanctions.

Now, we find ourselves on the precipice of an all out invasion of their country. Go figure.

As US sanctions continue to backfire due to an ever-increasing coalition of countries dedicated to fighting them, the American military industrial complex will have no other options for self-preservation other than war. Regardless of how you feel personally about what is going on with the Venezuelan people and their government, buying into another set of lies used for Western interventionism—in yet another country who “needs some freedom”—will undoubtedly be catastrophic, and 100 percent of recent similar situations proves this.