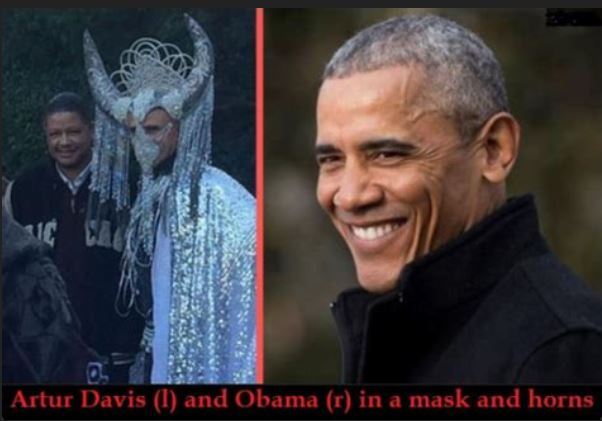 In an email, a reader of FOTM castigated me for referring to Democrats as “Demonrats” because, he claims, my doing so undermines my “credibility”.

Credibility? What a joke, coming from this reader who, several months ago, in a bid to elicit my sympathy, claimed to be “dying” from brain cancer, but no doctor had actually diagnosed him as such.

I don’t use words lightly. Democrats, by their stance on abortion — which, in the state of New York, is now legal abortion up to the moment of delivery — and other issues, in fact are demonic.

This post — on the curious penchant of prominent Democrats to dress themselves up as the Devil — provides yet another example of why I call them Demonrats.

Belmont was born with the name Isaac Belmont to a Jewish family in Alzey, in the Grand Duchy of Hesse, in Germany on December 8, 1813….

He attended The Philanthropin, a Jewish school, until he began his first job as an apprentice to the Rothschild banking firm in Frankfurt….

Belmont threw lavish balls and dinner parties, receiving mixed reviews from New York’s high society. He was an avid sportsman, and the famed Belmont Stakes thoroughbred horse race is named in his honor.

On August 11, 1848, a grand social event of New York’s high society — the Fancy Dress Ball — took place in Saratoga Springs, New York. The name reflects the presence of mineral springs in the area, which has made Saratoga a popular resort destination for over 200 years. Today, Saratoga Springs is ranked 10th in the list of the top 10 places to live in New York State for 2014, according to the national online real estate brokerage Movoto.

It was reported, admiringly, that one of the “richest” dresses in the Ball was that of August Belmont, who would be Chair of the Democratic National Committee. From the New York Herald, August 14, 1848, p. 2:

Mr. Auguste Belmont, agent of Messrs. Rothschilds, chose the character of Le Diable Boiteux. The costume was composed of the richest red and black velvet, decorated and trimmed with demons and fantastical figures. It was looked upon as one of the richest dresses in the room, and said to have cost two hundred dollars. The character was well sustained.

Le Diable Boiteux (The Devil Upon Two Sticks) is a 1707 novel, set in Madrid, by French writer Alain-René Lesage about Asmodeus, the king of demons, whom  Renaissance Christians called the King of the Nine Hells. Asmodeus also is referred to as one of the seven princes of Hell.

That means August Belmont dressed himself as Asmodeus, a king of demons.

Below is a screenshot of the New York Herald article, pp. 1-2:

Beto O’Rourke, 46, is one of the new darlings of the Democrat Party.

Celebrated left-wing political candidate Beto O’Rourke has been caught on video wearing a “Devil goat” costume complete with what appear to be horns or ears as part of a bizarre mask and a freakish one-piece costume. He sported this outfit while performing on stage, raising questions about his ties to Satan worship.

The media is now desperately trying to spin the emerging video as a comedy band gimmick, claiming the mask is a “sheep” mask, not the symbol of Baphomet, which is tied to Satanism and the occult.

Here’s a screenshot from the video of O’Rourke in the Baphomet costume:

The Baphomet was first drawn and popularized in 1854 by occultist Eliphas Léviin his book, Dogme et Rituel de la Haute Magie (Dogmas and Rituals of High Magic) — a winged, horned, androgynous, humanoid goat with breasts and phallus. (See “The Devil is transgender”)

Levi called his image the Baphomet — “The Sabbatic Goat” and “The Goat of Mendes.” Lévi’s Baphomet is the source of the Rider-Waite Tarot image of the Devil. The Baphomet goat, together with the downward-pointed pentagram, was adopted as the official symbol (the Sigil of Baphomet) of the Church of Satan and continues to be used among Satanists. (Wikipedia)