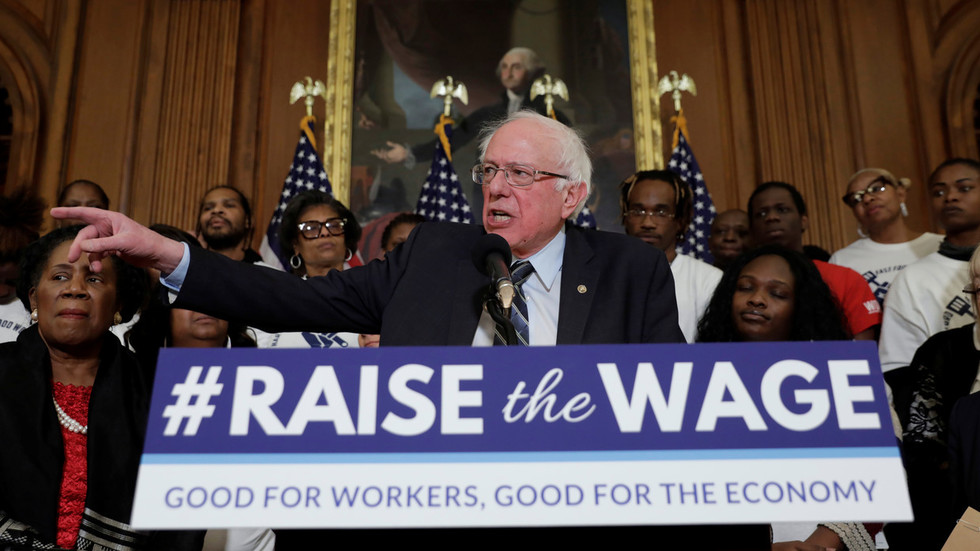 Share
Tweet
Share
Pin
Progressive godfather Bernie Sanders is rumored to be ready to announce a run for the presidency in 2020. He’s the most popular senator in the US, but according to one columnist, he’s also an agent of Putin. Yes, really.

Senator Bernie Sanders didn’t run in 2016 to push his bold platform of economic and social justice on America. No, instead his campaign was orchestrated by the Kremlin to divide the left and help Donald Trump take the presidency. At least that’s according to former New York Times columnist, and current Wired editor and Los Angeles Times writer, Virginia Heffernan.

Many of his 2016 supporters, she tweeted on Saturday, were “Kremlin minions.” For evidence, Heffernan relies on indictments against the Russian Internet Research Agency “troll farm” – claims that have never, and will never be proven in court.

Between the lines @HillaryClinton raising pointed questions abt Bernie as an op. Consider the complicity in his campaign of bots, trolls, bros who *still* bully, threaten & harass HRC & Democrats.

Many of the Bernie “supporters” we know fr/IRA indictments were Kremlin minions. https://t.co/vJFa0B2yyd

Proving whether a social media account is a ‘Russian bot’ or not is an inexact science, and some organizations have played fast and loose with the rules before. The Hamilton68 dashboard – a bot-hunting database frequently cited by Russiagate types – doesn’t reveal its methodology, and PropOrNot – another outfit that sees Russian agents everywhere – has declared that anyone using the term “establishment” is a Kremlin stooge. Ben Nimmo, bot-hunter in chief at NATO-sponsored think tank the Atlantic Council, has also claimed that bad grammar is a dead giveaway of paid Russian trolls.

But wait, Heffernan has more connections to make. Sanders’ 2016 strategist Tad Devine once worked with former Trump campaign chair Paul Manafort in Ukraine, where Manafort was lobbying for pro-Russian ex-president Viktor Yanukovych. Rather than business as usual in the Washington DC swamp, Heffernan sees more collusion.

“Did Paul Manafort’s onetime Ukraine colleague, Tad Devine, Bernie’s chief strategist, help him run to split the vote against Trump?” she asked. “And did Devine and Sanders work with their Kremlin helpers—botnets & trollfarms—wittingly or unwittingly to defeat Hillary Clinton?”

And did Devine and Sanders work with their Kremlin helpers—botnets & trollfarms—wittingly or unwittingly to defeat Hillary Clinton?

“I mean, the Bernie bots and bros — even the ones who believed they were acting on principle — certainly gave Trump and the Kremlin a mighty assist,” she continued.

I mean, the Bernie bots and bros — even the ones who believed they were acting on principle — certainly gave Trump and the Kremlin a mighty assist.

Better not tell her too that some Americans disagreed with Hillary Clinton’s brand of watery, focus-grouped centrism in 2016. That might be too much for a writer who once described Clinton as “an epochal heroine” who “cannot be faulted, criticized, or analyzed for even one more second.”

In reality, even with the Democratic National Convention secretly rooting for her, Clinton couldn’t match Sanders’ popularity by the end of the 2016 primary campaign. Clinton trailed the socialist Senator in favorability by 14 points, days before she was declared presumptive nominee in June. Indeed, as the DNC got underway and prepared to make her candidacy official, Clinton’s public image was at its lowest point in two decades. These polls were conducted by Gallup, via telephone interviews with real American voters, not Russian bots.

Threats to the establishment

But what’s really going on here? Has the Democrat/media establishment really consumed so much ‘Russiagate’ poison over the last two years that they’re seeing reds under the bed and hearing the Soviet anthem as they fall asleep? Or are they scared?

The Democratic Party has been pushed to the left in recent years, a change evident in the popularity of Sanders and the meteoric rise of New York Congresswoman Alexandria Ocasio-Cortez, both self-described socialists and champions of universal healthcare, a raised minimum wage, and redistributive taxes on the wealthy. While these policies have rapidly become mainstream ones, some Democrats are resisting the change.

Heffernan’s ‘Bernie is a Russian agent’ tweetstorm kicked off with a video interview with Clinton herself, who blasted Sanders’ supporters for not switching teams and declaring “I’m with her” after she took the Democratic nomination in 2016. Displaying her trademark lack of self-awareness, Clinton accused them of “sexism and misogyny.”

Hillary Clinton about the attacks on Kamala Harris: “It feeds into sexism and misogyny. She’s being attacked by the left. Enough. If you don’t want to support Democrats, go somewhere else.”

And it’s kicking off again. Clinton called recently announced 2020 candidate and California Senator Kamala Harris “one of my favorite Democrats,” and accused Sanders and his supporters of “doing the same thing” by criticizing her. “If you don’t want to support Democrats,” she said, “then go somewhere else.”

Harris announced her 2020 bid with a generic pledge to “fight for the best of who we are.” She has previously expressed support for Sanders’ universal healthcare bill and for a federally mandated $15 minimum wage, but is in most other respects a traditional, suit-and-tie Democrat.

Harris was instantly declared a frontrunner by the media, described by the New York Times as having “history-making potential,” and ranked six places above Sanders in CNN’s opaque “power rankings.”

Also, can someone explain in what sense Kamala Harris has "star power," other than the fact that NYT, CNN, etc. have decreed she has "star power"? What does that even mean?

Love to watch in real-time as consensus congeals, using criteria as meaningless and asinine as "power rankings," like it's the NBA playoffs or something pic.twitter.com/bKQlfzasKE

Progressive opposition to Harris has mostly focused on her support for foreign conflicts and her history as a career prosecutor accused of fighting “tooth and nail to uphold wrongful convictions.” However, her opponents have already been labeled by Russiagate types as “doing Putin’s work.”

The same smears have been deployed against Hawaiian Congresswoman Tulsi Gabbard, an Iraq war veteran whose 2020 campaign has focused on ending interventionist wars abroad. Critics pounded on Gabbard for meeting with Syrian leader Bashar Assad in 2017, and opposing American involvement in Syria’s civil war. Despite calling Assad a “brutal dictator,” Gabbard has been branded an “Assad sympathizer,” and a darling of Putin, the alt-right, and the Republican party.

With mainstream journalists pushing what Glenn Greenwald called “Alex-Jones-level conspiracy derangement,” and gatekeeping who is and isn’t a respectable Democrat, it looks like if Russian bots exist, they won’t have to lift a finger to divide the Democratic party heading into the coming election battle.

A very mainstream writer, @page88 – now at @wired, @Slate & @latimesopinion – explicitly suggests Bernie 2016 was a Kremlin operation & ponders if he was "wittingly" helping Putin. This is Alex-Jones-level conspiracy derangement but these are the conspiracies the mainstream likes pic.twitter.com/JGmSWn11ZH