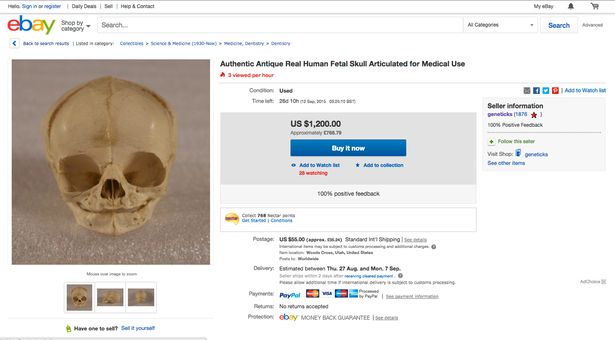 (True Conservative Pundit) This writer was surprised and horrified to come across this; human remains can be purchased online from many different sources.  I find this to be absolutely disgusting, and morally reprehensible. We are not talking about using human remains for scientific research here – no, anyone can purchase human remains from a variety of places on line.

Did you know that REAL human skulls were for sale as recently as 2006 on eBay before eBay put a stop to it?  Or that human remains are for sale on Amazon, and Instagram as well as other websites? (source)

On the bottom of the Skulls Unlimited webpage there is a link that reads: Sell Us Your Skull.  Upon clicking said link you are taken to a new page that reads in part:

If you have something for sale, just send us a few pictures and your asking price and we will let you know if we’re interested. Thank you!”

Skulls Unlimited buys from private individuals – so my question is, where are these individuals getting these human skulls from?  What verification procedures are in place concerning these purchases if any?

Skulls Unlimited apparently told National Geographic that they only sell recent donor skeletons to medial professionals and educators, but antique bones are for sale to anyone. (source)

In an article by KOB TV 4 investigates revealed that:

“To prove how easy it is to purchase human body parts, the 4 Investigates team purchased a real human foot from an online company called Skulls Unlimited. The $325 purchase was delivered without any request for credentials or being questioned about the intentions of the purchase.”

It is only this writer’s opinion, but sales of human remains to the public at large should be illegal.  What use would anyone in their right mind have for human remains?  A showpiece for your fireplace mantle?  Or maybe a cool decoration for your living-room coffee table?

How about wanting to donate your body to medical science?  What if your body winds up for sale instead of being utilized in a medical college, such as happened to this gentleman?

“It was a gruesome discovery: human body parts were found in 12 red tubs “dismembered by a coarse cutting instrument… such as a chainsaw,” according to court records.

Fasold was told her father’s arm was found with a hospital-type wristband.”

That is so reprehensible and disgusting I do not have the words.  That someone would profit in that manner from a human body.

The sale of human remains should be highly regulated, there is no good reason anyone in the public sector needs to own human remains.