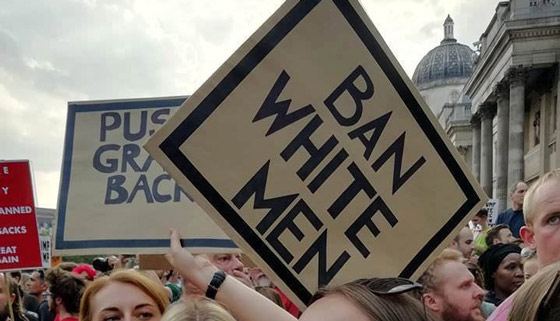 We know that the white male has been delegitimized. Women’s studies, black studies, Latino studies, and Identity Politics have been demonizing, and teaching hatred of, white males since the 1980s. But where did these hate-filled special interest groups get their power? The answer is that effete white males handed it to them.

It was white male university administrators who created the anti-white male propaganda degrees called women’s studies and black studies. It is the white males in the Democratic Party who endorse Identity Politics, an ideology that puts responsibility for all the evil in the world on white males.

The latest white male collapse is that of the president of Notre Dame University. Catholics, themselves formerly a marginalized people in the United States and Great Britain, are guilty, according to Rev. John Jenkins, Notre Dame’s president, of displaying in Notre Dame’s main building a wall mural painted by Luis Gregori in 1880. In the Identity Politics that now rules even Catholic universities, the 1880 painting is viewed in the 21st century as depicting native Americans in stereotypical submissive poses before white European explorers.

I would bet that most Americans would not read the painting in this way. But in American everything is determined by the few.

Notre Dame’s president has decided that the solution to this “offense” is for the university to cover the mural.

Apparently the only intelligent person present at Notre Dame university is a law student, Grant Strobl, who said that “if we adopt the standard of judging previous generations by current standards, we may reach a point where there are no longer accomplishments to celebrate.”

This is a good point, but I would go farther. Luis Gregori’s painting was not intended to depict the submission of native Americans to the white man. Here we have another case of real history replaced by fake history with the connivance of the president of Notre Dame University.

Think about this for a moment. Is Luis Gregori’s painting the only painting, the only piece of art that can be construed, or misconstrued, as giving offense?

What about, for example, the iconic photograph of the raising of the flag on Iwo Jima? Isn’t this celebration of American triumph over the Japanese insensitive and offensive to Japanese? How many military memorials are there that cannot be construed as giving offense to someone? How many paintings of martial and religious events are there that Identity Politics or some protected group cannot find offensive? What happens to history and to literature when we have to pretend that things did not happen because they are offensive to someone? Are all of the cowboy and Indian movies destined for the Memory Hole? How many songs can survive the scrutiny given to “Baby Its Cold Outside”? What about the Rolling Stones “Let’s Spend the Night Together,” or the Beatles “Why Don’t We Do It In the Road?” What about rapper songs? As blacks rank higher in the “preferred minority” category than white women, why isn’t it racist for a white female to resist the sexual advances of a black male? You get the idea. It is endless. Many of those pushing Identity Politics will be surprised when it turns on them.

Western Civilization is under attack for giving offense. Collapse is everywhere visible. Not even America’s most prestigeous Catholic university can defend an historic mural. Will Jesus be next? Jesus chased Jewish money-changers out of the temple. Doesn’t that make him an anti-semite or a self-hating Jew?

The categories that are used today with so much authority make no sense. There is no such thing as white and black races. There are many different white nationalities and ethnicities. There are Germans, Italians, French, Scandinavians, Slavs, Dutch, Greeks, English, Irish, Scots, and so forth. Similarly for blacks. A Maasai is not a Zulu. A Tutsi is not a Hutu.

There is no doubt that European nationalities have committed many atrocities, mainly against one another, as have black tribes. As recently as 1994 the Hutus killed one million Tutsis–70 percent of the Tutsi population–in the Rwanda Genocide.

Slavery is not a black/white issue. Over the course of history more whites have been enslaved than blacks. As Karl Polanyi documented in his book, Dahomey and the Slave Trade, black slavery originated in the slave wars of the black kings of Dahomey. Europeans purchased slaves from the black kingdom of Dahomey.

Identity politics has turned Western civilization against itself. Those claiming victim status have acquired many privileges that violate equality under law. They are granted quotas in university admissions and appointments and in business employment and promotions. They can bring charges against those of European descent for insensitivity and racism by misconstruing language, expressions, body language, facial expressions, art works and scientific theories as racist. Females have acquired similar power over men. Black studies and women studies rewrite history in order to present the white male as a more hateful figure.

Feminists and racial minorities can make inflammatory statements calling for the death of white males without suffering any consequence. Statements such as those by Texas State University student Rudy Martinez—“white is an abomination,” “I hate you because you shouldn’t exist,” “white death will mean liberation for all”—by Lisa Anderson-Levy, a dean at Beloit College—“whiteness poses an existential threat to social, political and economic life in the US”—and by Georgetown University professor Christine Fair who most certainly intended to offend the Senate Judiciary Committee and Kavanaugh— “Look at this chorus of entitled white men justifying a serial rapist’s arrogated entitlement. All of them deserve miserable deaths while feminists laugh as they take their last gasps. Bonus: we castrate their corpses and feed them to swine? Yes”—do not foster amiable race and gender relations. Moreover, these statements demonstrate the privileged position women and “preferred minorities” have achieved over white males. Any white male student, dean or professor who made such statements about blacks and women would be dismissed and made unemployable. Remember the senior engineer at Google who was fired for saying that men and women have different traits and are good at different tasks. Simply stating an obvious truth has become a firing offense.

The United States was a unique country in which traditional European enemies became assimilated as Americans. But assimilation is no longer emphasized or even permitted. The celebration of diversity and multiculturalism has split the population into victimizer and victimized groups, with hatred of the former taught to the latter. In place of unity, disunity has been created. The American future is not promising.

Contributed by Paul Craig Roberts of Institute for Political Economy.

Paul Craig Roberts was Assistant Secretary of the Treasury for Economic Policy and associate editor of the Wall Street Journal. He was columnist for Business Week, Scripps Howard News Service, and Creators Syndicate. He has had many university appointments. His internet columns have attracted a worldwide following. Visit his web site at the Institute for Political Economy.

This article has been posted with permission from Dr. Paul Craig Roberts.