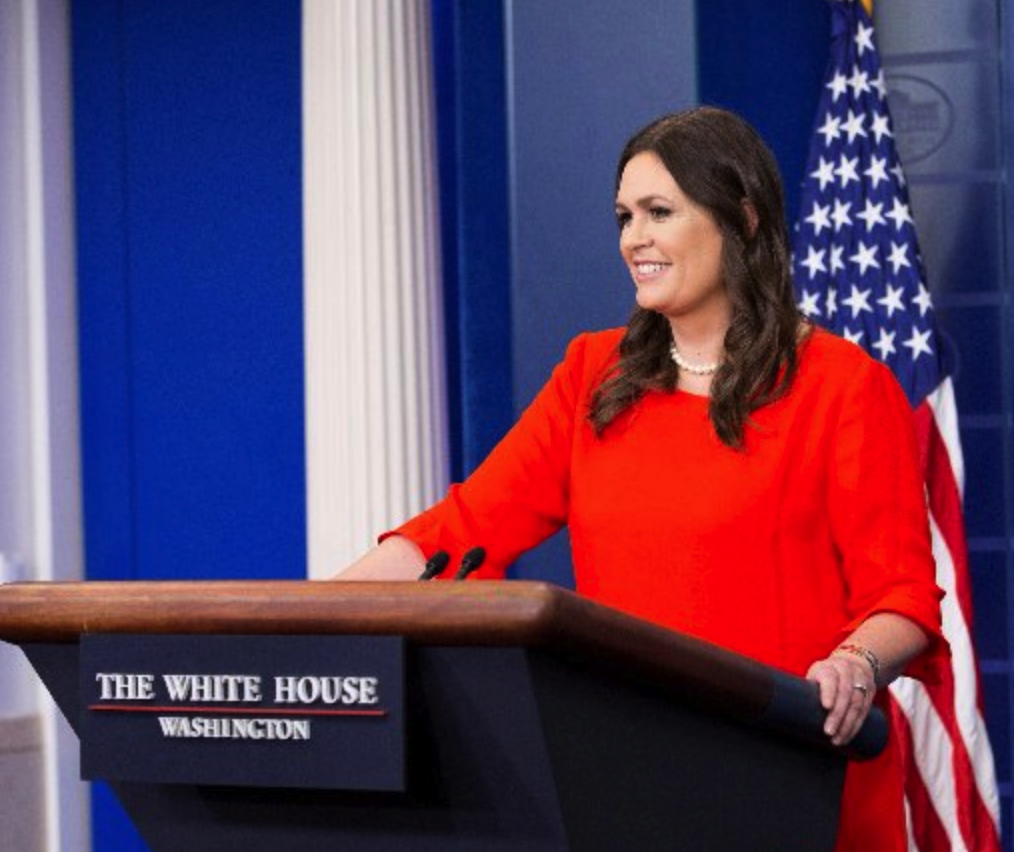 Isn’t it nice to have a press secretary in the White House that is not afraid to speak the truth?  Sarah Sanders has an extremely tough job, and she has done it with dignity and grace.  And in her position it would be really easy to attempt to be as “politically-correct” as possible, but she has not done that.  She is not afraid to get into intense exchanges with reporters from the top news networks, and she has never been shy when it comes to speaking about her faith.  And during one recent interview, she really freaked out the mainstream media by stating that she believes that God “wanted Donald Trump to become president”.  The following is a portion of her exchange with CBN’s David Brody…

BRODY: “From a spiritual perspective, for such a time as this, Donald Trump of all people, as you said earlier in the interview, the most conservative president, does it kind of blow your mind that someone like Donald Trump who is sitting in the Oval Office, I know you can list the accomplishments, but at the same time just from a spiritual perspective there are a lot of Christians who believe that for such a time as this …”

SANDERS: “I think God calls all of us to fill different roles at different times and I think that he wanted Donald Trump to become president, and that’s why he’s there and I think he has done a tremendous job in supporting a lot of the things that people of faith really care about.”

I can’t remember any other press secretary ever making a statement like that, and we are blessed to have her in that position.

And in the remainder of that interview, she continued to speak about matters of faith…

Much of Sanders’ 20-minute interview with the media organization revolved around the intersection of faith and politics, including how Christians in Syria will be affected by pulling troops out of the country, abortion and whether a wall along the southern border, Trump’s key campaign promise that led to a 35-day government shutdown, is moral.

Sanders argued that Trump is the “most conservative president that we’ve ever had,” pointing to how the administration has reshaped the judicial system with a wide assortment of conservative judges.

Needless to say, the mainstream media did not like Sarah Sanders talking like this, and her interview made front page news all over the nation.

In America today, people are more divided over politics than ever before, and this is having a ripple effect throughout our culture.  At this point, even dating apps are being created for people of different political viewpoints.  For example, a 41-year-old Idaho native named Christy Edwards Lawton has just created a new dating app for conservatives that is called “Righter”…

The app, she believes, is the perfect avenue for matching conservatives like herself with ideal romantic partners. She thinks romance has been lost in the world of modern dating, and Righter is trying to bring it back. Men have to pay on the first date. They should pay for all the dates, actually, holding the door and bringing back old-school chivalry. There’s a rationale behind this; men might throw on a shirt or get a haircut for a date, she says, but women typically spend more than $100 on hair styling, manicures, new outfits and other beautification regimes.

At 41, Christy is on her second marriage, and is an avid Republican fundraiser who keeps a low profile in her neighborhood outside Boise but has become a poster person for conservative dating following the launch of Righter, which employs two other women and three men.

The app has been live since December, and Lawton says that it already has 20,000 global users.

But of course the other side does not believe that “men should be men” and “women should be women” anymore.  They are trying to destroy traditional gender roles, and Gillette’s recent “toxic masculinity” ad is a perfect example of that.

Just recently, someone made an extremely funny parody video about that ad, and you can view it right here.

I just had to share that with you all, because I thought that it was absolutely hilarious.

As a nation, we desperately need a return to traditional values, and having a leader like Donald Trump in the White House is a big boost for our cause.  But of course the left is extremely eager to get rid of Trump, and some recent poll numbers have them dancing with glee…

New polling finds, however, the depth of the opposition against Trump is considerably deeper than it was against Reagan. This suggests Trump could have a much more difficult job turning around his bad ratings than Reagan or really any president in the modern polling era.

Right now, things are looking pretty good for the Democrats if it ends up being a two way race between Trump and their nominee.

Unfortunately for them, it doesn’t appear that the Democrats will get their dream scenario.  A major independent candidate is getting ready to enter the race, and that could change everything.  For much more on this, please see my article entitled “The One Thing That Could Almost Guarantee A Trump Victory In 2020 Is On The Verge Of Happening”.

It is a long way until November 2020, and so much could change between now and then.

But without a doubt we are in a very heated battle for the future of our culture, and that is something that is not going to change any time soon.