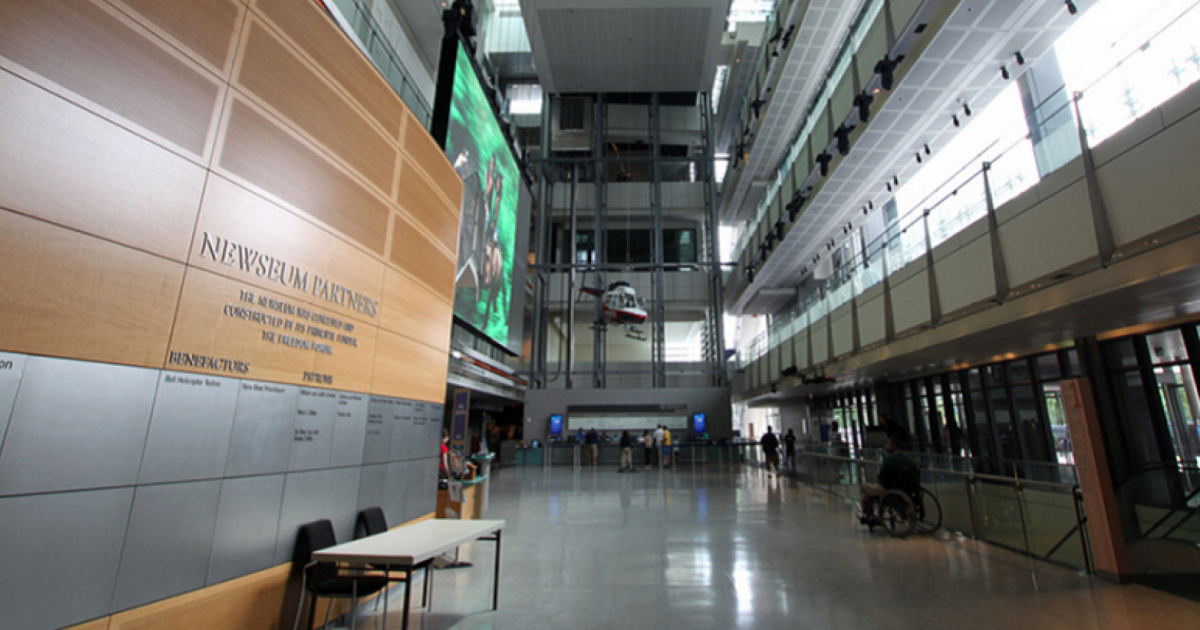 The media sold off its own temple last week and no one noticed.

A decade ago, a 643,000 square foot shrine to the media went up off the Washington Mall. The media funded organization behind it boasted that its Great Hall of News atrium was taller than the Sistine Chapel. The pseudo-religious metaphor continued with 50 tons of Tennessee marble being used to “create the First Amendment tablet on the building’s Pennsylvania Avenue façade”.

The thousands of artifacts included a 3,262 year old cuneiform brick from ancient Sumeria and a 2,756 year old statue of the Egyptian god Thoth, the mythical inventor of writing, worshiped by the media.

Last week, the $450 million temple constructed by the media to worship itself was sold off for $372 million to Johns Hopkins. There’s no word on whether they threw in the statue of their fallen god.

The fall of the media temple comes just as the media is on the defensive after fallout from a fake news hate campaign targeting a 16-year-old boy based on an out of context video clip. And the only thing that the media can say in defense of its lies about Covington Catholic is that it got them from social media.

That’s also its epitaph. The media doesn’t make the news. It’s just the noisiest part of the echo chamber, amplifying messages from lefty politicians from above and lefty social media trends from below.

The media temple was a project of the Freedom Foundation. The Foundation was backed by media giants like the New York Times, Bloomberg, Comcast, ABC, NBC and Time Warner. And much of the cash came from the Gannett media titan. In 1999, it commanded over $1 billion. By 2001, it was down to $700 million. Blowing through $450 million on a temple, complete with idol, couldn’t have helped.

The original Newseum had cost $50 million and offered free admission. The new Newseum was pure media hubris, stuck between the Capitol and White House as if it were another branch of government.

With a plethora of better museums to choose from, tourists to Washington D.C. weren’t interested in $24.95 tickets to see a news chopper suspended in the New York Times Ochs Sulzberger Great Hall’s atrium (taller than the Sistine Chapel). In desperation, the fake news museum even began selling a t-shirt carrying President Trump’s “You Are Very Fake News” taunt. Unlike most of its merchandise, the shirts were popular, but media protests soon put an end to the only popular thing about the Newseum.

And nobody was buying the Newseum’s t-shirts of Thoth; the dead idol of a dying industry.

Around the same time that the Newseum was selling its temple to the pagans of a useful profession, Gannett, which had once funded it, announced the layoff of as many as 400 employees.

The bloodshed is just beginning at the mammoth publisher responsible for USA Today and a massive portfolio of papers coast to coast, from the Detroit Free Press to the Arizona Republic to the Milwaukee Journal Sentinel. (If you visit a local paper and its site looks like the USA Today site, it’s a Gannett paper.)

Gannett money had poured into the media temple in happier times. Its finances have been troubled this year. And now it’s in a bloody war with Tribune, another newspaper giant, and the winner of the hostile takeover campaigns will consolidate by cutting jobs and putting more Thoth worshipers out of work.

It’s been a cold winter for the media. The Huffington Post was hit with major layoffs after its corporate parent, Verizon, grew tired of subsidizing Arianna’s vanity lefty project. The casualties decimated HuffPo’s opinion section and filled social media with unintentionally hilarious tweets by ‘journalists’ specializing in gender politics, poverty inequality and culture looking for work.

BuzzFeed, fresh off its recent Trump fake news scandal, announced 15% layoffs. The casualties included the fake news site’s national news team and national security team. Lefty site Mic had already imploded. Bustle’s attempted relaunch of Gawker collapsed with a slew of resignations. The Forward fired its editor and dumped 40% of its staff after $5 million in losses.

And that’s just the very recent bad news for the news. The full list of bad news in just the last year, never mind the last decade, would take more space to tell than even the Newseum could accommodate.

If the media falls with no one to report it, does it make a sound?

The big news here is that the media is dying. And in its desperation, its members are seeking survival strategies. Reporters are unionizing at an unprecedented pace in a futile effort at surviving the rounds of consolidations and layoffs. That strategy didn’t save anyone at Gawker, Al Jazeera America or the Huffington Post. Unions can’t save a bad business model that takes entire companies down with it.

And you can understand why someone who claims to be a “columnist with 10 years of writing about gender politics (and a literal PhD in romantic comedies)” seeking work after the latest layoffs would want the protection of a union.

Or the idol of a dead civilization.

Trump’s big win touched off a media gold rush. But radical partisanship left too many media outlets chasing too few anti-Trump eyeballs after having alienated everyone else. Some like the Washington Post and the New York Times have been more successful at it than others because of their role as brokers between their insider contacts and their insider audiences. Outsiders like BuzzFeed, who don’t have their own people inside the Mueller coup team, were left to make up even more dubious stuff.

The last desperate strategy of the media is blackmailing the big dot coms for operating income. Amazon’s boss is behind the Washington Post. And Google and Facebook are pouring in hundreds of millions of dollars into the media. But while that might have been enough to keep the Newseum afloat, it’s not nearly enough to maintain the media as anything more than a boutique operation.

The media declared a fake news crisis and demanded that Facebook and Google prioritize their traffic. As a piece at Columbia Journalism Review argued, “the one thing journalism actually needs: a guarantee that the conditions on the platform will benefit those producing high-quality reporting.”

Google and Facebook have already privileged media content and censored conservative media, even though that’s not what their users have signed up for. But that makes the media dependent on the business model of a handful of internet monopolies already being targeted by the GOP and the Dems. And the same disruptive trends that wrecked the media’s old business models will wreck its new one.

The media has never addressed the fundamental problem with its business model. It wants a monopoly on the marketplace of ideas even as its own positions drift further leftward. It has tried to outgrow that problem by becoming a bigger monopoly, but the internet limited the extent to which its old infrastructure investments could monopolize the public square, leaving its expensive investments in broadcasting and printing equipment as useless as the massive square footage of the Newseum.

And when that failed, the media swung fully leftward, becoming the messaging arm of the most radical elements in the country, while campaigning vigorously for the censorship of social media “fake news”.

But its new masters rightly view it with contempt.

“They call us to explain to them what’s happening in Moscow and Cairo,” Ben Rhodes once sneered to the New York Times. “Most of the outlets are reporting on world events from Washington. The average reporter we talk to is 27 years old, and their only reporting experience consists of being around political campaigns. That’s a sea change. They literally know nothing.”

It doesn’t take much skill to repeat talking points. Or to edit an article that a Fusion GPS hack or one of his many counterparts had already assembled for you behind the scenes.

The dedication of the Newseum in 2008 also marked the death of journalism. That was the year when the media tossed aside any appearance of independence and officially joined a political campaign. A decade later, journalism may be occasionally practiced on the sly, but it doesn’t exist as a profession.

Politicians, never mind PR hacks like Rhodes, once respected and feared journalists. Then they became the unpaid ideological errand boys and girls for Rhodes and his bosses. When lefty politicos and activists whistled, the New York Times, the Washington Post and the rest of the media asked, “How high?”

Readers, listeners and viewers used to be the media’s customer base. The man on the street who paid fifty cents for the paper was the audience all those thousands of reporters were serving. Now the media serves a dizzying assortment of lefty special interests, spinning their stories and doing their PR.

And then the media acts outraged when the public won’t pay it or share its stories on social media.

The Newseum white elephant at 555 Pennsylvania Avenue isn’t just narcissistic idolatry, it celebrates an idea of journalism that doesn’t exist. Journalism now is a bunch of millennial social justice activists playing dress-up. They’re not a profession or an industry. They don’t report. They don’t know anything. And they don’t serve the public. It’s not our fault that the people they really work for, won’t pay them.

Journalism is as extinct as the worshipers of Thoth and the Newseum. The media sold off its temple last week, but long before that its hacks and flacks had sold their soul.