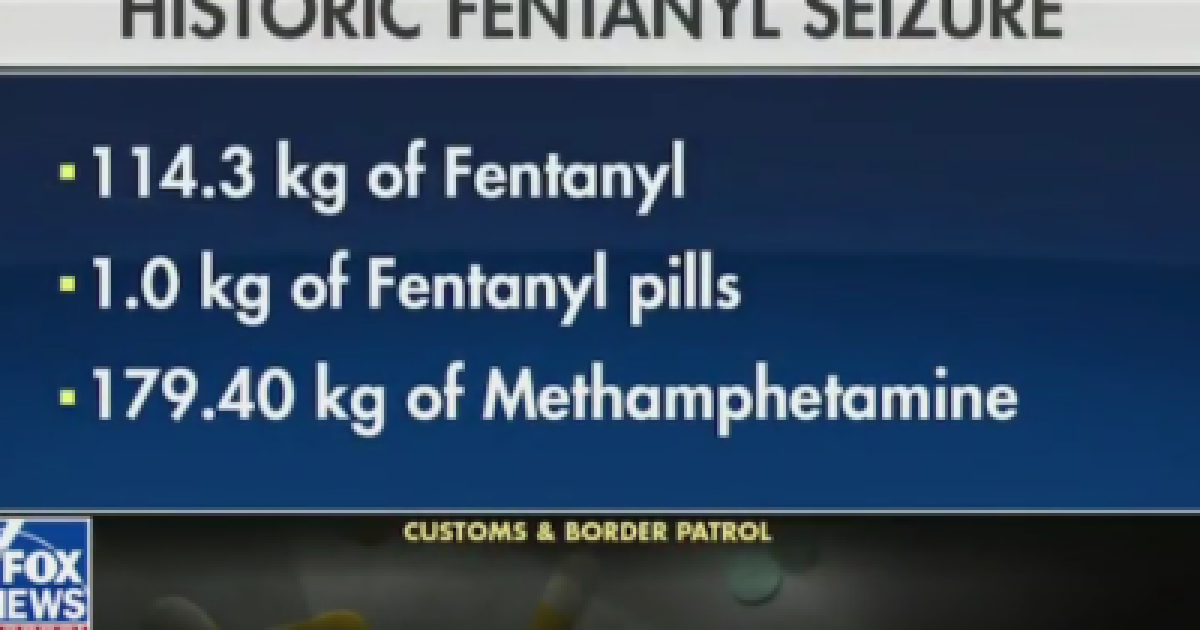 Imagine the devastation and destruction of lives these drugs would have caused if they had not been found. And then consider the fact that the Democrat Party leadership is hell-bent on stopping President Trump from protecting Americans from this kind of thing by building a wall along our Southern border.

They are so single-minded in their determination to enlarge their voting base and secure themselves in power for another generation that they are willing to see innumerable Americans dead and others with their lives shattered, just so they can enjoy the perks and privileges of office.

They are traitors and criminals.

U.S. Customs and Border Patrol seized enough fentanyl to kill over 50 million people from a truck that was trying to cross the southern border into the United States, according to an investigation by “Tucker Carlson Tonight.”

“Well, the U.S. border patrol has made the biggest fentanyl bust in history. An enormous amount, enough fentanyl to kill—they estimate—57 million people. That’s more than the combined population of the states of Illinois, New York and Pennsylvania. It’s a lot,” Carlson stated.

“We got our hands on an internal memo from U.S. Customs and Border Patrol that details this bust. The biggest fentanyl seizure in U.S. history,” Fox News Correspondent Hillary Vaughn began. “According to the memo, four days ago in Nogales, Arizona, at the port of entry, CBP officers stopped a tractor-trailer crossing the U.S.-Mexico border into the U.S. with enough fentanyl to kill 57 million people. That’s plenty of fatal dose to wipe out the entire populations of Texas, Arizona and New York state combined.”

They found this under the floor of the trailer. They found 114 kilograms of fentanyl. According to the DEA, just two milligrams is considered a lethal dose. They also grabbed 179 kg of methamphetamine and one gram of fentanyl in pill form. The street value for the fentanyl over $102 million. The CBP officers arrested the smuggler, a Mexican national who attempted to drive the drugs across the border. The suspect was a part of the DHS’s trusted traveler program called FAST, that stands for free and secure trade for commercial vehicles. The program started after 9/11….