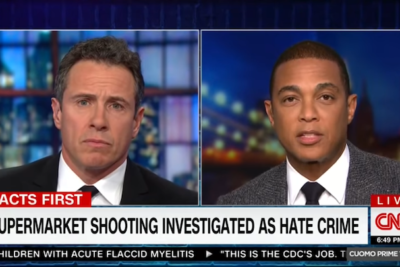 What Lemon and Cuomo are trying to do to the MAGA hat is the same thing the enemedia at large has done to the counter-jihad resistance for years.

The idea that wanting America to prosper and be strong — be great again — is some kind of code for racism or hatred is ridiculous on its face, unless you’re a leftist ideologue bent on destroying President Trump and everyone who supports him. And that’s what Lemon and Cuomo are.

My ears perk up when a senior American journalist starts his argument with the caveat, “I think people should be able to wear whatever they want, but …”

But that’s exactly how CNN host Don Lemon began a discussion with fellow host Chris Cuomo on Thursday evening. The two journalists were discussing the decision of a California chef, J. Kenji Lopez-Alt, to ban MAGA or “Make America Great Again” hat wearers from his restaurant. The journalists offered some troubling arguments.

First off, let’s be clear: As a legal rule, Lopez-Alt has the right to deny entry to MAGA hat wearers. He is a private owner of a place of public accommodation and can thus exclude anyone he wishes unless he does so on the basis of their color, race, religion, or nationality.

A quick aside: I believe a gentleman ought not wear a hat indoors, especially in a restaurant. This is a basic rule of British etiquette, but unfortunately one that is ignored by too many in our great nation (including my grandfather).

But Cuomo and Lemon made this a broader discussion: Ought we shun people who wear MAGA hats? Are they guilty of some offense against decency?

Cuomo is convinced MAGA hat wearers must yield to opponents. Referencing Lopez-Alt’s ban, Cuomo explains, “This isn’t so much about whether he has the right, it’s about whether or not it is right. And here’s my problem on this issue. Ordinarily I’d go down the line, look, be bigger than that. But I don’t want to fall into the trap of underselling the significance of the trigger of the expression to people. I think the more appropriate analogy to say is if people were wearing shirts in that said, ‘I hate black people,’ would he be okay to say, ‘Don’t come into my place with that’? And I think most people would say, ‘Yeah.’ That’s how people like [Lopez-Alt] see the MAGA hat. So does that make it okay? I think that’s the right question.”

To assert that “Make America Great Again” is an equivalent sentiment to “I hate black people” is, in my mind, absurd. A MAGA hat says nothing more about its wearer than “I support President Trump or some significant element of his platform.” And the scale of MAGA hat wearing necessarily means that there is a significant portion of otherwise law-abiding pleasant people wearing that hat. Trump’s approval rating remains above 35 percent of the adult population. That’s tens of millions of people who might wear the MAGA hat. How many of these believe in the most exclusionary elements of Trump’s rhetoric? I would venture a marginal few. That denies the rationality of any inferred implication of inherent MAGA offensiveness.

Don Lemon offered a similarly concerning interpretation of the MAGA hat. “Your clothing tells a story,” Lemon continued, “Maybe [the MAGA hat] means birtherism to people … maybe it means Mexicans are rapists to people … and so you cannot erase those things from the story of that hat … It just can’t be about what you want it to be about. There are symbols and things in society that you have to take as a whole.”

Compare Lemon’s contention that the MAGA hat “just can’t be about what you want it to be about” and Cuomo’s fear that he not “fall into the trap of underselling the significance of the trigger of the expression to people.” Here we enter a dangerous political territory. After all, I would suggest it is fundamentally counter to the American political tradition to chill one’s wearing of popular clothing simply because you fear that others not wearing it might not share your view as to what the wearing means….