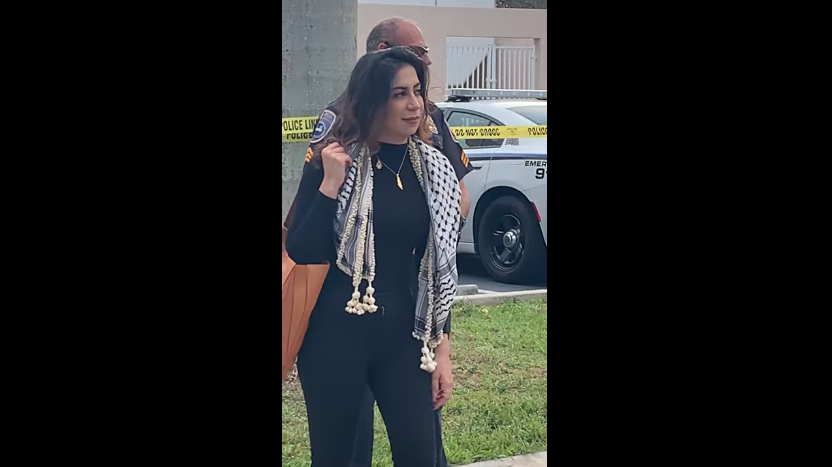 I have been covering the leftist/jihadi smear campaign against a brave Jewish politician in Hallandale, Florida who has been targeted for removal by terror-tied Hamas group CAIR and their leftwing lapdog Michele Lazarow on the commission. The local press, as is their way, demonize the wrong people.

On Saturday, Robert Spencer wrote an article at the Geller Report about an execrable hit piece by Sarah Blaskey of the Miami Herald, targeting Anabelle Lima-Taub, a Florida official who called out Muslim Rep. Rashida Tlaib for her Jew-hatred. In the article, Spencer notes that Blaskey wrote about a video in which Hamas-CAIR operative Rasha Mubarak was jeered at and menaced by men wearing MAGA hats — while, Blaskey wrote, Mubarak was filming them on her phone. Mubarak told Blaskey she feared she would be physically attacked. Yet Blaskey did not link this video, and it may not even exist. I received this email from a Geller Report reader who sent me this video, showing that Mubarak was never menaced or in fear. A CAIR operative lying — it’s like breathing for them.

I read your response piece about the Miami Herald story and your perspective was very accurate.

I was there to speak in support of Lima-Taub and her 1st amendment rights.

I happen to have taken some video of the small crowd that gathered outside prior to the meeting where various people with opposing views peaceful expressed their opinions.

I happened to observe a woman and a gentlemen, neither of which I knew who they were, but later learned the woman was named Mubarak. You will see she was in the crowd with the gentleman, he left the crowd to speak to a reporter as did Mubarak to stand near them, then she returned into the crowd, she didn’t appear threatened or appear as someone who was in fear for her safety. If she was, why would she walk back into the crowd?

Prior to speaking at the meeting, I was seated outside the commission chambers on a bench waiting my turn to speak, as the chamber was filled to capacity, and seated on the bench seated to the left of me was the the speaker who would be speaking after me, that was Ms Mubarak. I sat next to her for 30+ mins awaiting my turn, we chatted casually, she was watching the meeting live feed from her laptop. She didn’t appear at all shaken or in fear.

If you look carefully, there were a couple of people wearing MAGA hats who were completely on the opposite side of the crowd from Mubarak, there were also some people wrapped in Israeli flags, some of those were actually children.

This entire spectacle was not created by Lima-Taub’s initial comment, but rather by the media frenzy that was created over it by commissioner Michele Lazarow and her paid political consultants/lobbyists who first went to the Sun-Sentinel to push this story into the media spotlight. That’s the real story. This isn’t about hate and opposing views, this is all about a vindictive commissioner and her consultant retaliating against Lima-Taub, who they they want off the commission so they can keep their power and corruption that they bring to this very small beachfront town.

Show your support for a fighter under siege by the leftist/Islamic machine. Liab is sponsoring a resolution against the boycott of the Jews (BDS).

Here are the email addresses you should send your support to:
Mayor Joy. D Adams

Go to her Facebook page and write a note of support for Liab’s anti-BDS resolution at:
http://facebook.com/theroguecommissioner

GO TO THE COMMISSION MEETING  THIS WEDNESDAY, FEBRUARY 6 AT 5:35 PM: