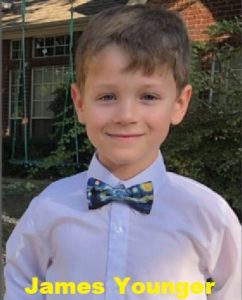 This 6-year-old boy needs our help!

Although James Younger is biologically a boy and wants to stay that way, his mother, Anne Georgulas, has dressed him as a girl since he was 3, calls him “Luna” instead of James, and even enrolled him in school as a girl.

An October 18, 2018 court order by the Municipal Court of the City of Coppell, Texas, gave the mother “the exclusive right, after notifying the Father, to consent to psychiatric and psychological treatment of the children.” (James has a younger brother, Jude.)

Now, Georgulas is subjecting her boy to  “social transitioning” therapy to prepare him for chemical castration when he’s 8 years old.

For that, not only did Georgulas try to remove all parental rights from Jeffrey, she also accused him of domestic violence. But the court document below, dated June 11, 2018, proves that Jeffrey is acquitted on the domestic assault charges.

Jeffrey Younger is asking for our help.

Below is his appeal, from SaveJames.com:

A child being prepared for sex-change surgery at age 6!

Hear the whole story in this Complete Podcast: A Father’s Fight

Visit the ALL ABOUT JAMES link for more about this great kid!

How you can help: