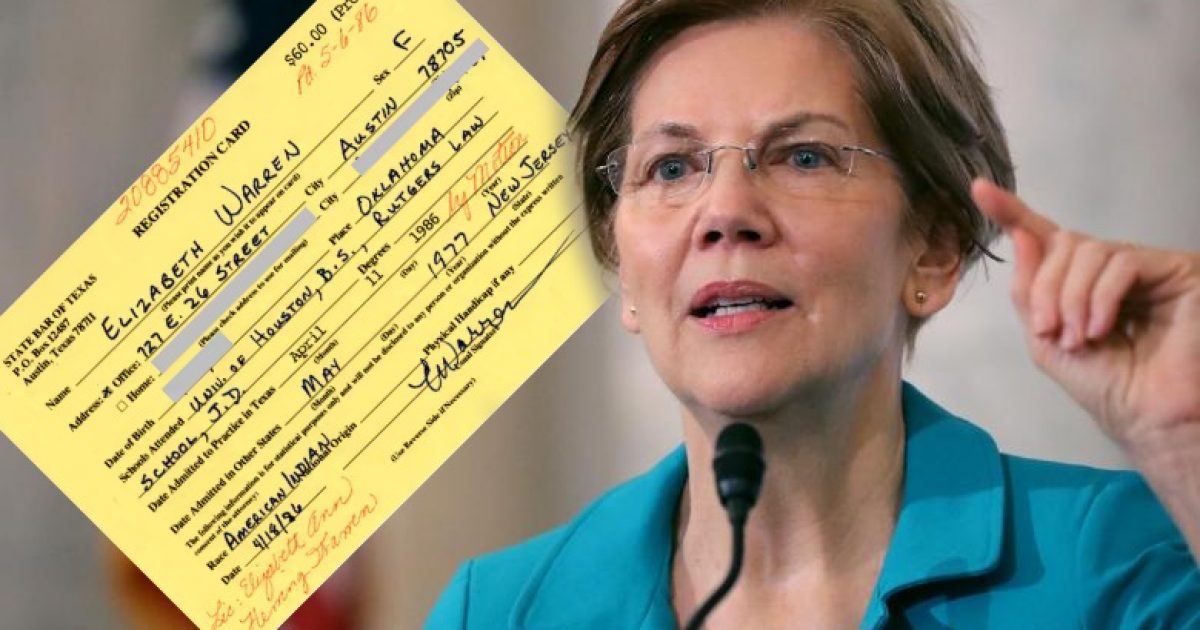 Obviously, The CIA-tied Washington Post is not very happy with Elizabeth “Fauxahontas” Warren and has published her 1986 Texas State Bar Card on which she listed herself as an “American Indian,” despite what DNA tests have shown.  This revelation exposes her lies from the past that she “never used my family tree to get a break or get ahead. I never used it to advance my career.”

First, as Howard Cosell used to say, “Let’s go to the videotape.”

In February 2018, Elizabeth Warren said that while she’s not enrolled in any tribe, she never used her heritage to advance her career.

“I’m not enrolled in a tribe. And I want to make something clear. I respect that distinction. I understand that tribal membership is determined by tribes and only by tribes. I never used my family tree to get a break or get ahead. I never used it to advance my career.”

However, it seems the Washington Post has probably been sitting on this little nugget of information much as they sat on the sexual allegations against Virginia Democrat Lt. Governor Justin Fairfax.

Sen. Elizabeth Warren said Tuesday that she was sorry that she identified herself as a Native American for almost two decades, reflecting her ongoing struggle to quiet a controversy that continues to haunt her as she prepares to formally announce a presidential bid.

Her comments more fully explain the regret she expressed last week to the chief of the Cherokee Nation, the first time she’s said she was sorry for claiming American Indian heritage.

But as Warren undergoes increased scrutiny as a presidential candidate, additional documents could surface to keep the issue alive.

Using an open records request during a general inquiry, for example, The Post obtained Warren’s registration card for the State Bar of Texas, providing a previously undisclosed example of Warren identifying as an “American Indian.”

Warren filled out the card by hand in neat blue ink and signed it. Dated April 1986, it is the first document to surface showing Warren making the claim in her own handwriting. Her office didn’t dispute its authenticity.

“For the seven years this has been in the news, Elizabeth Warren has refused to apologize. Now, four days before her formal presidential launch, she’s issued a politically opportunistic apology that doesn’t go nearly far enough,” Republican National Committee (RNC) spokesman Mike Reed said in a statement, referring to Warren’s plan to formally begin her campaign for the White House on Saturday. “Warren pretended to be a minority to climb the Ivy League ladder – a lie that will continue to haunt her presidential ambitions.”

The State Bar document, which functions as a kind of directory entry for lawyers, is among multiple instances in which Warren described herself as a Native American. She indicated that she was Cherokee in an Oklahoma cookbook called “Pow Wow Chow

” in 1984, and listed herself as a minority in the Association of American Law Schools Directory of Faculty from 1986 to 1995 — a move she said later was an effort to “connect” with other “people like me.”

Warren dropped off the list in 1995, after moving to Harvard Law School. But in 1996, an article in the student-run Harvard Crimson apparently indicated that faculty members and administrators still believed Warren was Native American.

I tend to agree. Elizabeth Warren isn’t sincere.  She has continued to peddle this lie to keep from admitting that is exactly what she was doing and this latest revelation is simply an attempt to try and keep some semblance of a possible presidential bid in 2020 alive.  These people are pathetic in how arrogant they are that they can do things like this and still have their hands out and ask the American people to trust them and cast their vote for the most powerful office in our land.