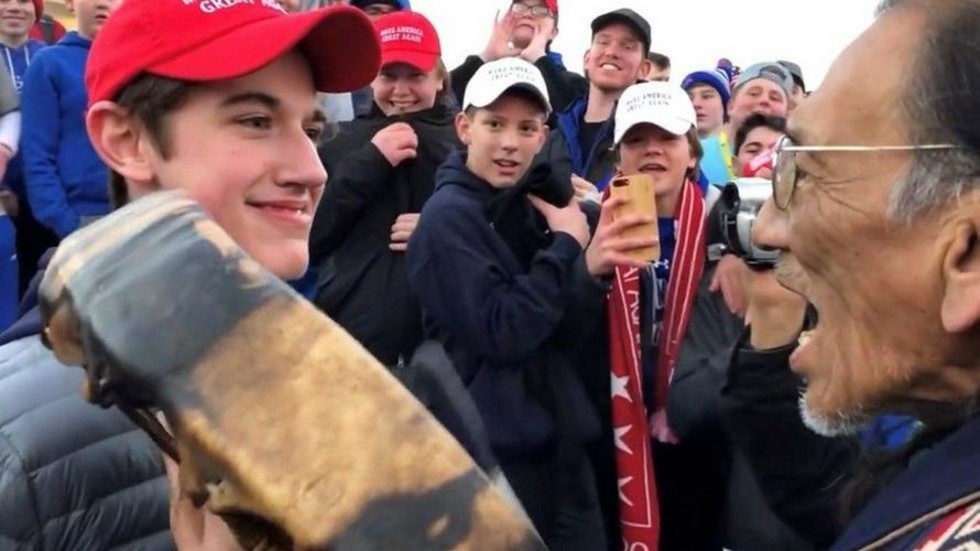 More than 50 media outlets, celebrities and public figures could be targeted in a libel suit aiming to vindicate a MAGA-hat-wearing teen who was savaged by social media after he faced off with a Native American activist.

Attorneys representing Nick Sandmann, the teenager whose viral “smirk” launched a tirade of social media outrage, have sent out “preservation demand letters” to more than 50 organizations and individuals who could potentially be included in the forthcoming libel suit.

News outlets such as CNN, the Guardian, NPR, the New York Times and the Atlantic, as well as prominent public figures like Democratic Senator Elizabeth Warren, have reportedly received letters warning them not to destroy evidence relevant to the case. The senator is joined by an eclectic group of celebrities and talking heads: Jim Carrey, Kathy Griffin, Bill Maher and Joy Reid are all potential defendants.

Many of the organizations and individuals on the list characterized Sandmann as a racist – and called for vigilante justice.

“The Sandmann Family was blindsided by the mainstream and social media mob accusations and threats against Nick,”Lin Wood, who represents the 16-year-old high-school student, told the Boston Herald. Wood said the civil lawsuit could include a range of accusations, including libel, slander, invasion of privacy, intentional infliction of emotional distress, cyberbullying, and cyber assault.

The Kentucky teen was raked over the coals by social media and news outlets after a video emerged of his standoff with activist Nathan Phillips in Washington, DC in January. Dozens of news stories and countless pundits accused Sandmann of racism and harassment – allegations which were supported by Phillips’ creative re-telling of the incident.

However, subsequent video evidence revealed that the initial viral clip lacked crucial context. Sandmann’s attorneys released a 15-minute video which purports to show how a group of Black Hebrew Israelites taunted Sandmann and his fellow students, before Phillips arrived at the scene and began drumming – undermining the Native American’s claim that he was trying to stop racial incitement initiated by the Kentucky teens. The video also shows how Sandmann actually tried to dissuade his classmates from responding to taunts by the Native American activists. The video also documents how Phillips has repeatedly lied about being a Vietnam veteran. The 64-year-old was in the Marines but was never deployed.

Legal analyst Jennifer Breedon told RT that the pending lawsuit could be a “landmark” case.

“There’s certainly foundation to go to trial for this,” Breedon argued. “A lot of Americans can realize that celebrities are taking this way too far. They’re using their celebrity platforms to speak out against things which they really have no expertise or knowledge on.”

She said that public figures with tremendous influence should be held to certain standards, since a single misinformed tweet is capable of snowballing into a reputation-ruining internet witch hunt.

For its part, the media must work to “ensure that the stories they publish are factual,” Breedon said. She noted that the media’s over-eagerness to attack Donald Trump and his supporters has engendered public distrust in mainstream journalism.