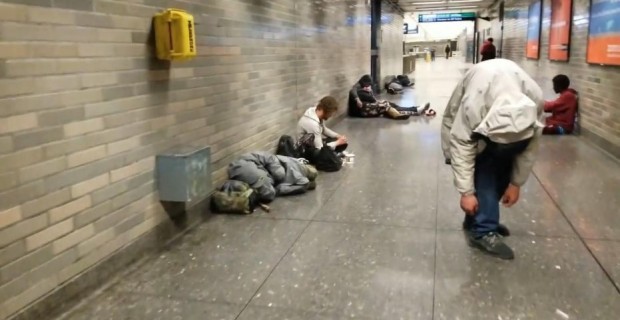 San Francisco’s drug addicts now outnumber high school students as it was revealed that the city handed out a record 5.8 million free syringes last year – about 500,000 more than in 2017.

Despite spending an extra $1.8 million dollars last year in an effort to retrieve used needles, the government handed out about 2 million more syringes than it got back.

Despite new Mayor London Breed’s promise to clean up the city, 9,659 calls complaining about needles littering the streets were received in 2018, an increase of a third on 2017.

The number of complaints about feces on the streets has also tripled since 2011.

The disconnect between San Francisco’s tech elite and the homeless junkies who camp on its streets was emphasized in a tweet by Erik Finn showing starving, jobless homeless people huddled outside a “robotic coffeebar”.

San Francisco in one photo.

Fully Robotic Coffeeshop next to the Starving Jobless Homeless pic.twitter.com/uwK936Twb5

Investor Bill Blain also expressed horror at what he witnessed during a recent trip to San Francisco, writing, “The squalor we saw in The City was frightful.”

“San Francisco has always been one of my favourite US cities, but the degree of homelessness, mental illness and drug abuse we saw on this trip was truly shocking,” writes Blaine, adding that his liberal friends shrugged it off as always having been that way, ignorant of the fact that it is clearly getting worse.

“I found it quite shocking the number of folk sleeping rough on the sidewalks, the smell of weed and drug impedimenta everywhere, the filth, mental illness and degradation on view just a few meters from the financial centre driving Silicon Valley,” said Blaine.

“It’s a city where the destitute seem to have become invisible to the Uber hailing elites. We found ourselves hopping on one of the beautiful F-Route Trolley Buses to find nearly every seat occupied by someone lugging around their worldly possessions around in a plastic bag. It was desperately sad,” he lamented.

As the video below documents, San Francisco is perhaps the prime example of what leftist nihilism mixed with virtue signalling eventually does to a city.