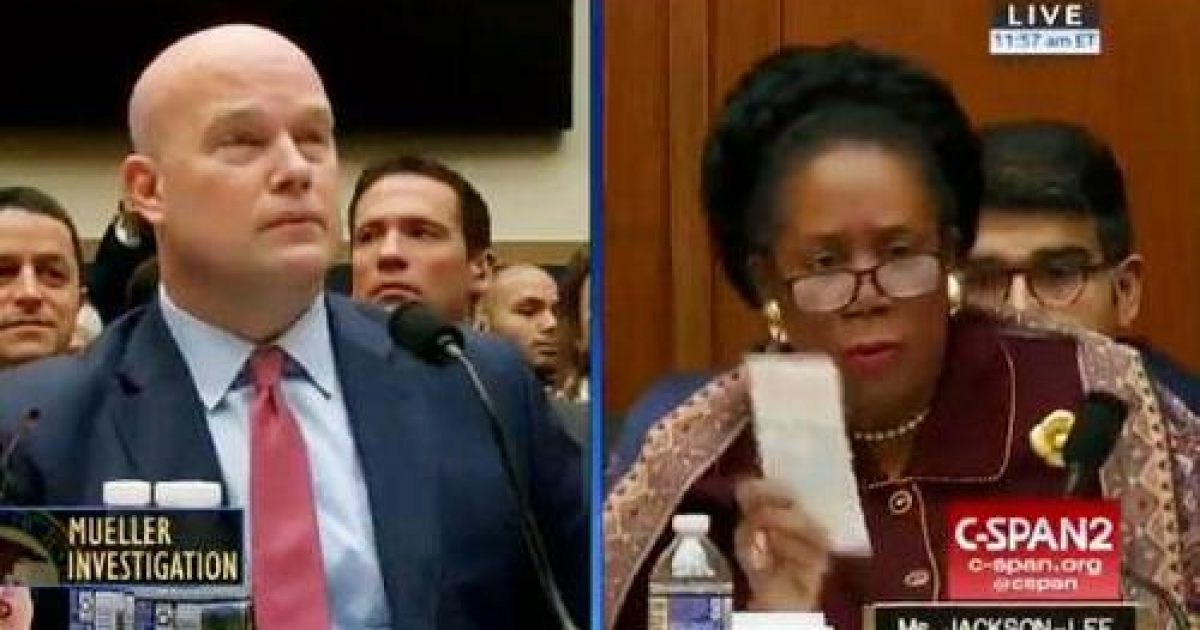 Following another swamp creature appointment and confirmation by President Donald Trump, acting Attorney General Matthew Whitaker was questioned by the House Judiciary Committee.  Whitaker, however, was not one to be bullied by the likes of Rep. Sheila Jackson-Lee (D-TX) or Rep. Jerrold Nadler (D-NY), pointing out that when they thought they would continue to question him, that their time was up for questions.

While Democrats suggested that Whitaker was stalling for time to avoid answering their questions, Whitaker simply tried to explain himself instead of simply answering “yes” or “no,” something that others, both Republican and Democrat, have done from the committee in the past.

When he was about to answer, he simply commented that he didn’t know if Jackson-Lee’s time had been restored.

That’s when she began to talk to him like a little child, claiming, “Mr. attorney general, we are not joking here.  And your humor is not acceptable.”

Whitaker tries to run out the clock instead of answering @JacksonLeeTX18's extremely straightforward question about if he's testified during an oversight hearing before.

"Mr attorney general, we are not joking here and your humor is not acceptable," she admonishes him. pic.twitter.com/LP0aaikYre

Of course, Whitaker answered her that he had not been to a confirmation hearing because he was only acting AG and not up for confirmation, which is something Jackson-Lee should have known because after all, she is supposed to know the Constitution in order to ask questions.

However, later when Chairman Jerrold Nadler tried to continue to question Whitaker after his time was up, Whitaker reminded Nadler that his time had run out for questioning.

“Mr. Chairman, I see that your five minutes is up,” said Whitaker – resulting in gasps from those in attendance.

“I am here voluntarily. We have agreed to five minute rounds,” he added.

"In your capacity as Acting Attorney General, have you ever been asked to approve any request or action to be taken by the special counsel?" House Judiciary Chair Nadler asks.

"Mr. Chairman, I see that your five minutes is up," Acting AG Whitaker answers. https://t.co/Ukgp5FywxQ pic.twitter.com/y4e9gkQeTh

Nadler began to laugh at Whitaker’s comment and added that the committee had not imposed the 5-minute rule on Whitaker.

Nadler’s time ran out just as he was asking Whitaker whether he had a role in approving any “request or action to be taken by the special counsel.”

Whitaker came under fire for his comments on nullification last year, which I wholeheartedly supported.

This was nice to see someone push back against these windbags who are only there for themselves and not to represent the people and obey the Constitution.