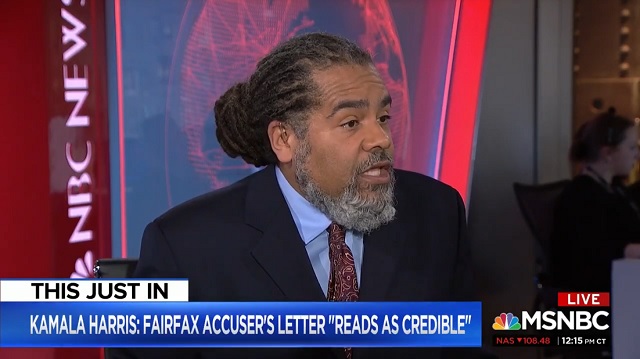 MSNBC regular Mark Thompson defended Virginia Lt Gov Justin Fairfax on Thursday by saying that wearing blackface is a “crime” to black people which could be on par with the crime of rape.

From the Free Beacon:

“If it boils down to Justin Fairfax having to resign and the two blackface people don’t, then those very same people will say, now wait a minute, that’s sort of a double standard,” Thompson said.

“But hold on a second–sexual assault is a crime, and blackface is awful, but it’s not a crime,” Ruhle said.

“Well, but the calls have been for them to resign too,” Thompson replied.

“But those are two different things,” Ruhle said.

“You have double victimization,” Thompson went on. “You have [Fairfax’s accuser Vanessa Tyson] as an African-American woman being victimized. Then you have an African-American elected official with an enormous black vote in Virginia, he has to pay a price nobody else does.”

“Yeah, but he’d be paying a price for something different than what the other two would be paying for,” Ruhle continued.

Thompson argued it was relevant that the “original crime” was committed by Northam, an apparent reference to the fact his yearbook photo was the first report to rock Virginia.

“It would be different … but the original crime was blackface on the part of Northam,” Thompson said.

“Which is awful, but it’s not a crime,” Ruhle said.

“Well, it’s a crime to us as black people,” Thompson said.

Are they going to go after establishment darlings Jimmy Kimmel and Jimmy Fallon next?

If blackface is a crime, is whiteface also a crime?

Should Eddie Murphy and Dave Chappelle be brought up on charges?

What’s the appropriate punishment for this “crime”? Who is going to claim damages and how will they demonstrate them in a court of law? Should it be met with a fine, jail time, or life in prison?

It seems to be that all these people, including Northam, were doing this as a joke (or as they claim, a “homage” to others), rather than out of some deep racial animus. I think everyone knows that and realizes that’s true, but they don’t care because they’re exploiting it for political gain.

Rape, unlike blackface, is an actual crime with an actual victim. That said, if there’s no evidence someone committed rape, they can’t be charged with a crime just because. Nor should their name be dragged through the mud as happened with Judge Kavanaugh with these exact same leftists’ full approval.

If these leftists were to be consistent with the fake “liberal” ideology they claim to believe, they would demand all three Democrats resign. The problem with that is it would allow the fourth in command representative who is a Republican to take power, so instead they’re coming up with all sorts of insane justifications to allow some or all to stay.

Meanwhile, another very real crime is infanticide, which Northam said should be legalized without triggering any outrage on the part of these same Democrats, nor any calls for his resignation.

According to the modern left, killing a baby shortly before or after birth is no big deal (and in fact a sacred right of “women’s choice”), but wearing blackface is a crime on par with rape.