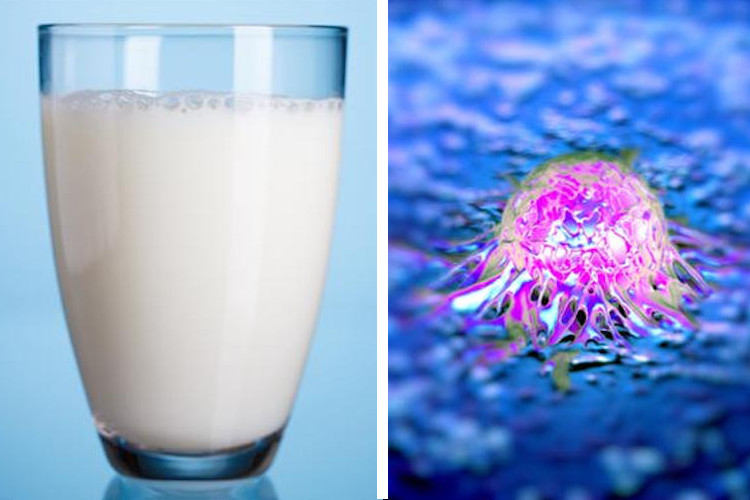 The dairy industry is big business, and globally is ‘expected to generate revenues worth USD 442.32 billion in 2019,’ while the U.S. dairy industry spends up to a billion dollars a year in advertising. With so much money on the line and the continual push by dairy advertisers, it’s difficult to convince people that drinking milk is another one of the false promises of the modern food problem.

So, does milk really do a body good, as the popular advertising campaign suggests?

According to American biochemist Dr. T. Colin Campbell, milk is one of the most harmful foods we are consuming, and he has the scientific research to back up this claim. Warning people that milk ‘turns on cancer’ and ‘leeches calcium from your bones,’ Dr. Campbell is well-known for his influential book, The China Study: The Most Comprehensive Study of Nutrition Ever Conducted And the Startling Implications for Diet, Weight Loss, And Long-term Health. Based on a 20-year long study conducted by the Chinese Academy of Preventive Medicine, Cornell University, and the University of Oxford, The China Study documents serious negative implications of consuming milk.

“The China Study examines the link between the consumption of animal products (including dairy) and chronic illnesses such as coronary heart disease, diabetes, breast cancer, prostate cancer, and bowel cancer.[3] The authors conclude that people who eat a predominantly whole-food, plant-based diet—avoiding animal products as a main source of nutrition, including beef, pork, poultry, fish, eggs, cheese, and milk, and reducing their intake of processed foods and refined carbohydrates—will escape, reduce, or reverse the development of numerous diseases.” [Source]

The study is exceptionally damning to the dairy industry, and while some would like to dismiss Dr. Campbell’s work, his prestigious and influential career gives us good reason to pay attention. Here’s a short snippet from his bio:

For more than forty years, Dr. T. Colin Campbell has been at the forefront of nutrition research. His legacy, the China Project, is the most comprehensive study of health and nutrition ever conducted. Dr. Campbell is a professor Emeritus at Cornell University and is most well-known for co-authoring the bestselling book The China Study with his son, Thomas Campbell, MD. In addition to his long and outstanding career as an author, scientific researcher, and Cornell professor, Dr. Campbell has been featured in several documentary films. He is the founder of the T. Colin Campbell Center for Nutrition Studies and the online internationally-recognized Plant-Based Nutrition Certificate. [Source]

Honing in the main protein found in cow’s milk, casein, Campbell makes the case that it is a serious carcinogen which is having major consequences for public health in America and around the world. Casein

“Casein is the most relevant chemical carcinogen ever identified, make no mistake about it. – Dr. Colin Campbell

What does he base this on?

“What I did during the early part of my career was nothing more than what traditional science would suggest. I made the observation that diets presumably higher in animal protein were associated with liver cancer in the Philippines. When coupled with the extraordinary report from India showing that casein fed to experimental rats at the usual levels of intake dramatically promoted liver cancer, it prompted my 27-year-long study The China Project, of how this effect worked. We did dozens of experiments to see if this was true and, further, how it worked.” ~Dr. Colin Campbell, The China Study

It’s interesting to note that the dairy industry has been telling us for decades that milk is good for the bones because it is full of calcium. But, not unlike the water fluoridation scam, which claims to prevent dental fluorosis but is actually causing it, Campbell says that milk actually makes your bones weaker by leaching calcium from them.

“One thing animal protein does is trigger metabolic acidosis. This happens when the body produces too much acid and becomes very acidic, which can be caused by multiple things, including the absorption of casein found in animal protein. Casein makes up almost 90 percent of the protein in a cow’s milk. When the body experiences this type of acidosis, it actually forces the body to compensate by leaching calcium from the bones to help neutralize the increased acidity. Over time, all of this can have severe and detrimental effects on bone health, and studies have shown this.” [Source]

Regarding casein, along with whey it is one of the two proteins found in milk, although the body digests each in very different ways.

“There are two types of protein found in dairy products: casein and whey protein. Thirty-eight percent of the solid matter in milk is made of protein. Of that total protein, 80 percent is casein and 20 percent is whey. Cheese is made mostly of casein, where most of the liquid whey found in milk has been filtered or strained out. But all dairy products contain casein, not just cheese. The difference between whey and casein is how they’re digested and how they react in the body.

Because casein digests so slowly, natural morphine-like substances in casein known ascasomorphins, act like opiates in the body as they enter the bloodstream. Just minutes after you eat a dairy-based food, the casein protein begins to break down. This releases the drug-like casomorphins, which attach to opiate receptors in the brain and cause severe addictions to dairy products (hence the reason they keep people coming back for more.) Casomorphinstrigger such an addictive response that they’ve been compared to heroin in terms of their strength to cause food addictions and mood disorders.

The following talk by Dr. Campbell discusses in greater detail the dangers of casein.

According to Dr. Campbell’s research, the consumption of casein appears to act almost like an ‘on switch for cancer,’ perhaps contributing in a major way to the cancer epidemic we see today.

“What we learned along the way is that we could turn on and turn off cancer. Turn it on by increasing casein consumption, turn it off by decreasing it or replacing it with plant protein. That was a really exciting thing that we could take nutrition and turn cancer on and off, I mean that, that was pretty startling.” ~Dr. Colin Campbell

The primary reason for this, as Dr. Campbell states, is that the consumption of casein protein tends to create an acidic condition in the body, known as metabolic acidosis, which is widely known to be a primary driver of a litany of diseases and poor health conditions, and has even been called a precursor to cancer. Informed nutritionists and holistic physicians have for years been highlighting the importance of eating alkaline foods and working to eliminate the consumption of acidic foods.

A clip from the documentary Forks Over Knives discusses the link between excessive casein consumption, acidosis and disease.

Is human health is dependent on the consumption of dairy products, or are we better off without them? With as big as the dairy industry is, it is not at all difficult to understand that information countering the narrative milk does a body good would be unwelcome to those who make their living on dairy.

This article (Top Scientist Exposes the Real Dangers of Milk: It ‘Turns on Cancer’ and ‘Leaches Calcium from Your Bones’) originally created and published by Waking Times and is published here under a Creative Commons license with attribution to Alex Pietrowski and WakingTimes.com.