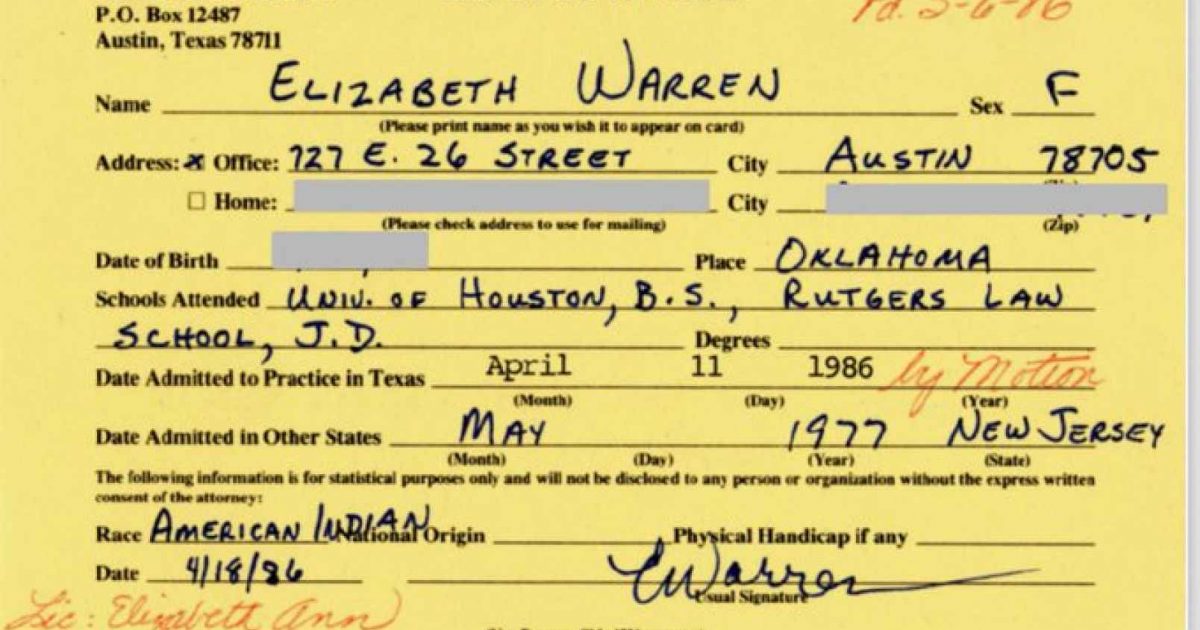 In one of its more disturbing acts of collusion that didn’t involve covering up an alleged rape, the Washington Post tried to help Elizabeth Warren bury her latest scandal.

It isn’t working so well.

Sen. Elizabeth Warren (D-Mass.) apologized repeatedly on Wednesday for identifying as American Indian on her Texas State Bar registration card, but she also suggested that it might not be the only document on which she labeled herself as such.

The Washington Post revealed on Tuesday that Warren had listed herself as “American Indian” on her Texas State Bar card, raising questions of how much the senator has claimed an identity with a community that does not accept her as one of its own. Warren, originally from Oklahoma, said she had grown up believing she had Native American ancestry and marked her identity following what her family had told her.

Actually, Warren had claimed that she hadn’t used a family legend to get ahead. The registration card makes it clear that this wasn’t some sort of coincidence, but that a very white woman had falsely claimed to be a minority during the early stages of her professional career.

“Look, this is who I grew up believing with my brothers,” Warren told reporters on Capitol Hill on Wednesday afternoon. “This is our family’s story, and it’s all consistent from that point in time. But as I said, it’s important to note I’m not a tribal citizen and I should have been more mindful of the distinction.”

Even if your family’s story claimed an Indian ancestor somewhere, it doesn’t make you Indian. Warren wasn’t claiming that because she felt it because she tried to become part of an American Indian community in any other way than putting it up on career forms.

But the Texas Bar registration raises new questions of whether there are any other documents on which she claimed to be Native American. When asked on Wednesday whether there were, Warren reiterated that she filled out paperwork at the time in line with the family stories she grew up with.

“So all I know is during this time period, this is consistent with what I did because it was based on my understanding from my family’s stories,“ Warren said on Wednesday.

Nobody fills out legal documents based on family stories. Certainly, lawyers don’t.

And Warren stopped doing it even before she was being knocked over it. She stopped a while back. Not because the family stories changed, but because she got what she wanted.

She’s never tried to be part of an American Indian community. She did it to gain an advantage.

When a reporter asked Warren whether she would drop out of the presidential race, she said, “Thank you,” and walked away.