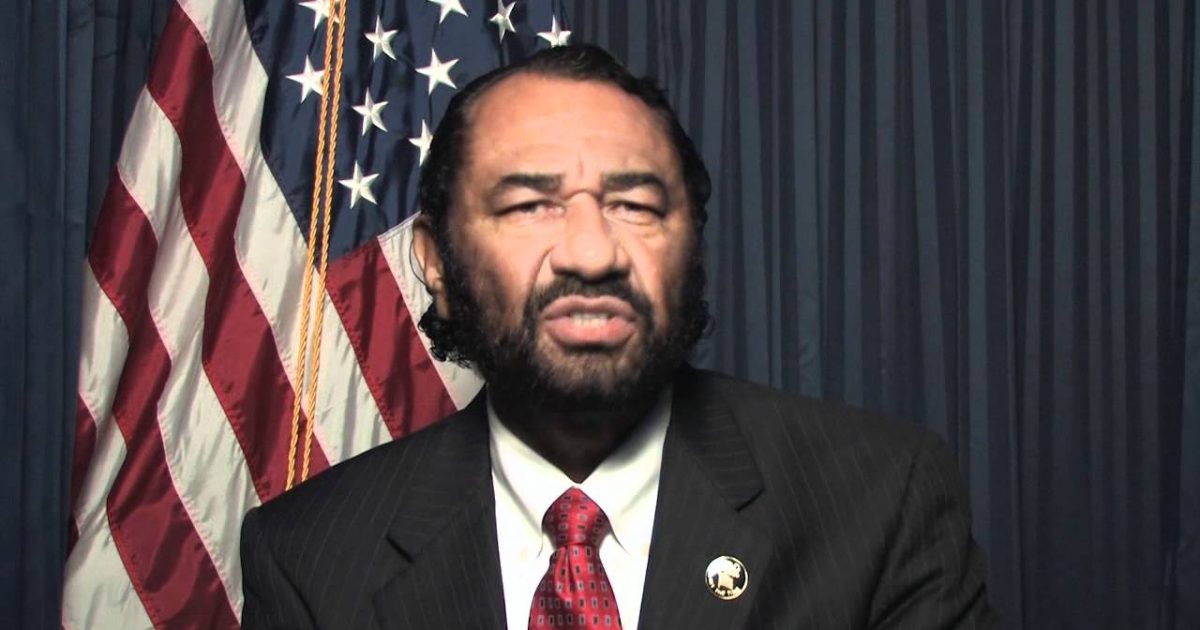 On Thursday, Rep. Al Green, D-Texas, promised to force an impeachment vote against President Trump for — brace yourself — Gov. Ralph Northam’s past bigotry, The Hill and others reported.  Northam, by the way, happens to be a Democrat.

According to The Hill report:

Rep. Al Green (D-Texas) said the refusal of both Virginia’s governor, Ralph Northam (D), and the state’s attorney general, Mark Herring (D), to resign after admissions of wearing blackface in the past “is but a symptom of a greater syndrome that currently plagues our country as a result of not acting on President Trump’s bigotry.”

Green argued that the pair has been emboldened “to a great extent because the Trump presidency has sent a message that you can be immune to the consequences of bigotry, by daring those with the authority and power to constitutionally remove you from office.”

“We no longer stare bigotry down; bigotry now stares us down,” Green said in a statement, released late Thursday night. “Further, an argument that Governor Ralph Northam and Attorney General Mark Herring should resign will subject us to accusations of political hypocrisy if we refuse to take on a bigoted president.”

In short, Green wants to impeach Trump for something done by Democrats in Virginia, even though Trump had nothing to do with any of the allegations against the three Democrats.

The Washington Examiner’s Becket Adams put it this way:

The Texas Democrat wants it so eagerly, in fact, that he often uses whatever is happening in the news cycle at the moment to argue that the time to impeach Trump is now. It doesn’t matter what’s happening: Rep. Green will find a way to tie it back to his obsession with impeaching the current president. This single-minded pursuit of impeachment has, of course, produced some notably absurd moments for the congressman, including when he claimed this week that the chaos in Virginia is further proof that Trump must be impeached.

You read that right: Three Democrats in Virginia get in trouble, so that means the Republican president should leave office.

Adams is 100 percent correct in his analysis.

When we allow bigotry to infect the body politic with impunity at the highest level, other levels will expect impunity for their bigotry. Gov. Northam’s refusal to resign for his bigotry is a symptom. Failure to act on Pres. Trump’s bigotry is the problem. #ImpeachmentIsNotDead

"How can we demand with any degree of credibility that the governor resign? We have to start at the top. This level of bigotry is trickling down." pic.twitter.com/WEneKxnlSf

Green, The Hill said, did not indicate when he would force his vote for impeachment.  We’re hoping it’s soon, so Republicans can start using it as a political advertisement to show how unhinged and out-of-touch with reality Democrats truly are.