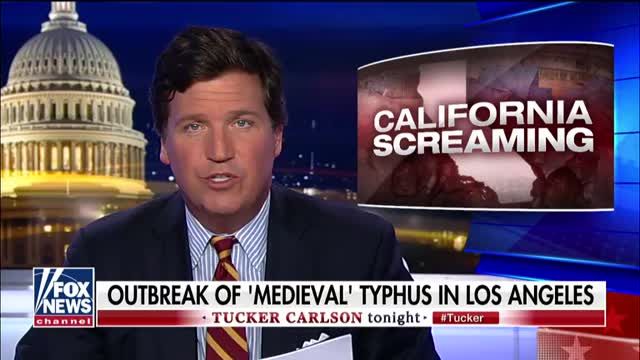 “Who gets typhus? It’s a medieval disease that’s caused by trash,” she wondered.

Greenwood is partially correct. The typhus outbreak, like the hepatitis outbreak, was directly caused by social justice policies that legalized public vagrancy, and leaving trash and human waste on sidewalks. The piles of trash, human waste and people combine to create horrifying diseased conditions. Before Greenwood, many Los Angeles patients who had been diagnosed with typhus were indeed homeless.

“There are rats in City Hall and City Hall East,” she complained. “There are enormous rats and their tails are as long as their bodies.”

The rats are a problem, but the fleas that carry the disease that Greenwood has can live on a variety of animals, including stray cats and possums. That’s why the typhus outbreak isn’t just happening in Skid Row, but has spread to Long Beach and Pasadena. And while the homeless encampments act as incubators for the disease, it’s not the only social justice policy spreading disease across America.

Or at least in California and Texas.

“It’s never been considered a very common disease,” Peter Hotez, the dean of the National School of Tropical Medicine at Baylor College of Medicine in Houston, noted, “but we seem to see it more frequently. And it seems to be extending across from Southern California all along the Mexican border into southeastern Texas and then into the Gulf Coast in Florida.”

America never had much of a history of typhus, but Mexico did. And our brief episodes of typhus invariably involved immigrants and migrants carrying the disease from Europe or Mexico.

The first outbreak of the disease in this hemisphere occurred in Mexico back in the 17th century and there have been 22 major outbreaks since then, caused in part by refugees and crowded conditions. Typhus was so associated with Mexico that it was even known as Tabardillo or Mexican typhus fever. There was extensive debate as to whether Mexican typhus was different than European typhus.

The first case of typhus in southern California was linked to Mexican refugees.

Dr. L.M. Powers, a Los Angeles physician, was the first to spot it. “The first recognized and recorded cases of typhus fever in southern California occurred in the summer of 1916, when many Mexicans came to this section during a civil war in their own country,” he wrote in a paper published in the Journal of the American Medical Association.

The first victim of typhus had visited El Paso. Dr. Powers linked many other typhus cases in Los Angeles to Mexico. Historical records show that these cases involved migrants and Mexican railway workers.

In saner times, American authorities understood the problem and took common sense measures to fight the spread of the disease. The rise of typhus cases in California a century ago led to a campaign that included the delousing of anyone coming into the United States from certain parts of Mexico. Leftists have revisited this history in recent years to make obscene analogies to Holocaust gas chambers.

But despite the insistence that disinfection stations were motivated by racism, rather than real fear of the disease, the 67 typhus cases in El Paso make it very clear that there was a real problem.

El Paso’s efforts to keep out typhus were touched off by the death of Dr. W. C. Kluttz, who spotted the disease in the Mexican refugees that he was treating, before becoming infected and dying of it.

Dr. Kluttz was far from the only medical professional who lost his life to the disease. Dr. Howard Taylor Ricketts, the brilliant pathologist after whom Rickettsia, the genome that causes typhus is named, died while trying to isolate typhus in Mexico City at the request of the Mexican government.

At Dr. Kluttz’s funeral, El Paso’s Mayor Lea called for “a strong federally enforced quarantine here that would effectively stop the entrance into this country of disease-bearing persons from south of the Rio Grande.”

The ambitious 2,000 mile quarantine ultimately proved to be a success, preventing Mexico’s typhus outbreaks from spreading into the United States. But it also claimed a toll with at least one inspector, David M. White, conducting disinfection procedures, contracting typhus and dying of the disease.

Illegal migrants seeking to bypass the quarantine however spread the disease in unlikely places.

A 1921 outbreak of typhus on a Navajo reservation was attributed to it being on a “pathway for itinerant laborers.” That particular outbreak appears to have killed 27 Navajo Indians.

The quarantine is history and typhus cases continue to rise in border states.

Texas saw a surge of typhus cases between 2008 and 2016. And the cases have been heavily concentrated in counties with high illegal populations. But officials insist on blaming ‘global warming’.

Typhus had fallen off the radar in the United States. It had been delisted by the CDC in 1994. And then it made a comeback in the middle nineties. Los Angeles saw a rise in the number of typhus cases in 1996 around the same time as futile efforts were being launched to fight the plague of illegal migration.

Now the situation has worsened. And it will only keep getting worse.

Like superstitious dark age types, leftists insist on blaming the typhus outbreaks on global warming, caused by an angry ‘Mother Earth’ rather than on the very real spread of disease by people. Instead of preventing the spread of disease, they insist that we must repent for our crimes against the environment, and recycle more, and then the earth will cool and the typhus outbreak will stop.

This denial of basic scientific facts is at the root of the typhus outbreak. Raising taxes in a bizarre scheme to change the weather is a bizarre folly that will do absolutely nothing to stop the spread of typhus.

The legalization of illegal migration and homelessness, is leading to a new wave of disease outbreaks.

Epidemiology shows us that typhus flares up in border counties and areas with large illegal alien populations. From there, it takes root in poor areas with bad hygiene. Fleas carried by rats, possums and cats can then pass on the disease to people who would have never expected to come down with it.

We know how to stop typhus. It begins with ending public vagrancy and illegal migration.

The Los Angeles Deputy City Attorney called typhus a “medieval disease”. Senator Kamala Harris of California ridiculed President Trump’s proposal for a border wall as “medieval”. California Rep. Harley Rouda urged Trump to “give up on the outdated notion of building a wall from medieval times.”