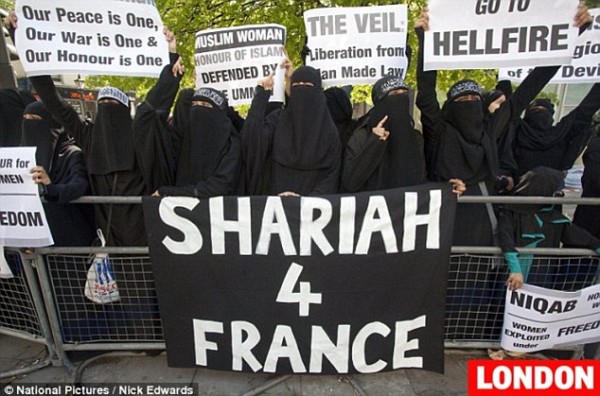 “Almost half of Swedish women are regularly prisoners in their own homes because it is too dangerous to go outside. Muslim religious police and gangs are controlling ever larger areas. There are not enough police to stabilize the country. There is no help in sight for the Swedes, and Sweden is becoming an ever-greater security threat to the surrounding NATO countries,” reported Nicolai Sennels of Jihad Watch.

Every chapter of The Strange Death of Europe: Immigration, Identity, Islam by Douglas Murray sends a chill up any Western reader’s spine.

None of the leaders of Europe planned on or foresaw the chaos and religious zealotry of Muslims moving into their countries.  They assumed that immigrants from such distant regions like Pakistan, Afghanistan, Ethiopia, Congo and Nigeria would gladly assimilate into advanced European culture. They escaped their shitholes to migrate to a modern country.  European leaders assumed their cultures, their educational systems and their freedoms would be accepted by Muslims from the Middle East and Africa.

European leaders discovered their folly as racial, cultural and religious mayhem overtook Europe.  Every European today, whether it’s Sweden, Norway, Great Britain, France, Germany, Denmark, Finland, Holland, Italy, Spain, Austria, Switzerland—understands the plight of women in the face of the Islamic onslaught.  Gays feel the Islamic rage.  Jewish people find themselves being killed or terrified in their own neighborhoods.

Anyone who speaks out, or writes anything about Muslim conquest or draws a cartoon of the prophet—faces intimidation and/or outright getting his or her throat sliced.  Murray gives example after example of anyone who thought “free speech” continued in Europe, would find themselves hiding or dead from Muslim terrorists who kill anyone to defies the Quran.  Just for reporting these facts that I’m relating, if I wrote this account in France, I would face a “fatwa” or death to an infidel for simply speaking the truth about Islam.

If you look back at history, demographics dictate destiny of any country.  Europe saved itself from the Muslim hordes when Charles Martel in 732 at the Battle of Tours in France, killed every last Muslim in the struggle for Europe.  If Martel had failed, Europe would have rendered itself Islamic, which meant no free speech, women’s rights, children’s rights, religious choice, gay rights, no dancing, no artists like Da Vinci (Islam does not allow paintings of people) or any other freedoms that Westerners enjoy today.  Islam proves itself a dark, violent and pernicious religion that spreads itself by violence and fear.  Its prime directive in the Quran:  “Convert or kill all non-believers.”

January 27, 2019, Jihad Watch, Christine Douglas Williams reported, “A 25-year-old Syrian man was arrested in the German town of Landshut this week after approaching a group of young girls on their way to school and molesting them. The case is just the latest in a wave of Muslim migrant sex attacks since the height of the migrant crisis in 2015, many of which have involved adults preying on minors.

“Muslim men are allowed by Allah to rape non-Muslim or infidel women to “humiliate” them, according to a female Islamic scholar from the prestigious Al-Azhar University in Cairo, Egypt.”

After 1945, as Europe allowed itself to be overrun by the Muslim Turks as workers, but workers that failed to return to their homeland, the insidious march of the third world started in earnest.  By 1973, Frenchman Jean Raspail wrote a penetrating novel, The Camp of the Saints, that showed an armada of third world wretched poor sailing toward France and all of Europe.

One of the captains said, “You don’t know my people. If this band of brutes ever lands on your shores, they will swallow you up.”

The average European became the victims of Muslim terrorist attacks such as Nice, Brussels, Charlie Hebdo, Paris, Stockholm, Malmo, Oslo, Holland and hundreds of other individual attacks on Europeans.

Murray wrote, “Nothing demonstrates this failure in the multicultural era better than the fact that the ideologies—political and religious—of the incomers were rarely a subject of consideration and were almost never a permissible subject for debate.”

Soon, majority Muslim populations in cities across Europe practiced their barbaric Sharia Law.  “No Go Zones” erupted where police and firefighters dared not tread.  The United Kingdom discovered 73,000 female genital mutilation victims along with hundreds of “honor killings” of Muslim women.  Jewish communities fled their own homes from immigrant attacks on their synagogues. Women feared walking down the street for fear of their lives. If anyone spoke up, they faced brutal killings.

At one point a Somalian immigrant, Hirsi Ali, fleeing Somalia in order to escape female genital mutilation, wrote a short story on Islamic violence toward women, while living in Holland. The great grandson of Vincent Van Gogh, Theo Van Gogh produced a movie for her titled: Submission. A Muslim stopped Van Gogh on his bicycle as Van Gogh pedaled to work, and slit his throat and left a knife in his heart with a note that he would kill Ali next.  More terrorist killings occurred to shock the Dutch.  But instead of standing up, they backed down to all demands by Muslims.

The same occurred all over Europe.  The European leaders didn’t know what to do with all the violence.  At this moment, British citizens voted to get out of the European Union because of the forced immigration into their lands.  The Yellow Vests of France fight to stop Macron.  Sweden’s citizens anguish over the loss of their country to Muslim immigrants.  In Oslo, according to my contact over there, nearly 40 percent Muslims now command the city with Sharia patrols, and blond Norwegians dye their hair black so as not to be molested by Muslims.

Norwegians flee Oslo like Detroit whites fled Detroit in the 1990’s to decline Detroit’s population by 1.2 million people.  From 1.85 million Detroit citizens back in 1970 to 648,000 today.  More than half are Muslim immigrants.

Culture and identity equate to destiny. If you’re not sure, take a look at the Native American Indians.  The white man swept over this continent with endless, mechanized military might.  The Red Man never recovered, and today, lives within internment camps, living on welfare and booze.  His cultures, languages, land, religions, ways of life and freedoms no longer exist.

What does it all mean for Europe?  Is a French person French anymore?  Is English culture Muslim or British?  Is Germany German or Muslim?  Is a Muslim in Germany a German?  Can a Muslim in Sweden be Swedish?  Is a Norwegian a Muslim or Somalian or Pakistani?  Do Muslims consider themselves Americans or Muslims?  Answer: Muslims first, last and always.  In other words, they do not identify with any country, but instead, their culture and religion, only.  At some point, Europeans will not be allowed to identify with themselves or their country, but instead, they will be forced to identify as Muslims. Sharia Law dictates that outcome.  And, as their numbers grow from 50 million Muslims, to 100 million Muslims, Europe’s Strange Death is assured.

Take a look at Europe, and now Canada, and throw in Australia. All follow the path of the Camp of the Saints toward a very conflicted and unfortunate future.

The only solution: stop all immigration into America and Canada before we become like Europe.  Stop all Sharia Law from being practiced or followed in America, Canada and Australia.  If we don’t, we will become like Islamic Europe.