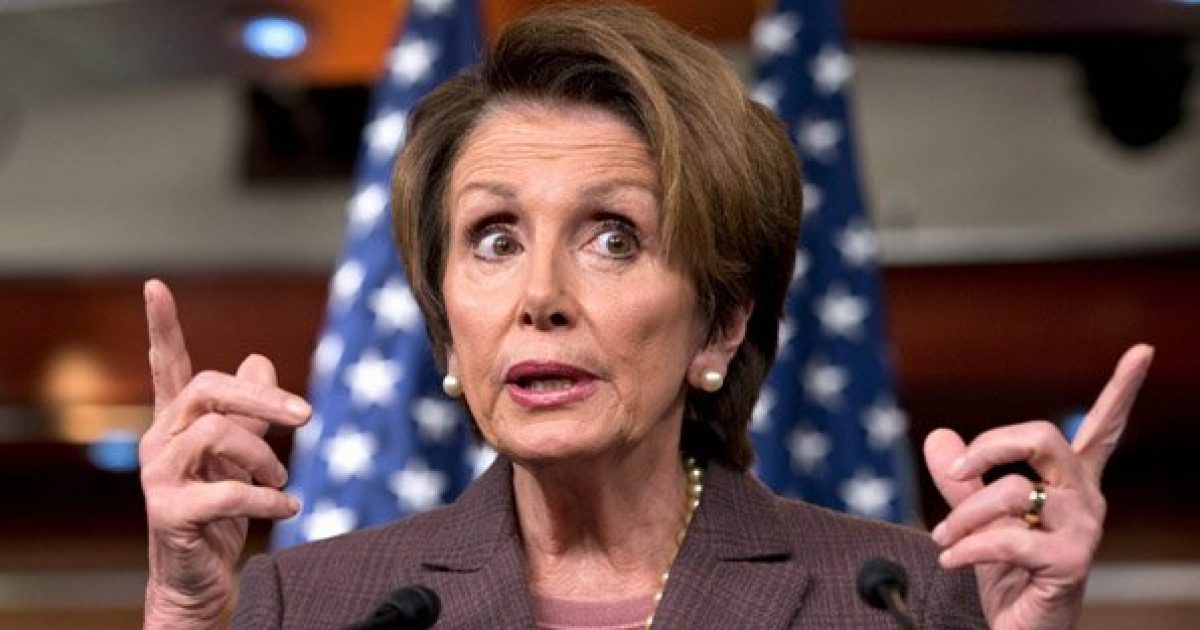 House Speaker Nancy Pelosi is rich, filthy rich.  She and her husband have accumulated a ton of wealth, but have not been so eager, like many Democrats, to part with it and put their money where their mouths are concerning giving to other to take care of needs.  Yet, she is among the first to misquote Scripture, like the devil, in order to use government to steal your resources to claim they are caring for their neighbor and doing what the Bible commands while doing nothing more than making sure they retain their power in DC.  A new report is out demonstrating that Pelosi has not only gained her fortune through legitimate means, although if we were to investigate even those might be called into question, but even some illegitimate means.

According to the House Press Gallery, House speakers earn an annual salary of $223,500, which amounts to a roughly $30,000 raise for Pelosi, who is now again the third-highest-paid elected representative in the federal government.

While Pelosi’s net worth varies depending on who is reporting, Roll Call’s most recent Wealth of Congress analysis claims the Speaker of the House is worth at least $16 million.  However, OpenSecrets puts her around $100 million.

Still, way under a person that Elizabeth “Fauxahontas” Warren deems worthy of a major tax increase.

However, her own financial disclosures indicate that she and her husband, Paul, own both a house and vineyard in California, and that the combined total are worth at least $5 million.  The vineyard brought in between $15,000 and $50,000 in grape sales to the Pelosis in 2017.

Pelosi also owns stock in Disney, Facebook and Apple.  No surprise there.

However, a large percentage of Pelosi’s money comes from Financial Leasing Services, Inc.

In all, Pelosi’s investments of her vineyard, stock, salary and property add up to an incredible income, but make her net worth at least $100 million.  And you people thought she wasn’t part of the one percent.

Back in 2011, Steve Kroft of “60 Minutes” exposed that she bought initial public offerings (IPOs) that earned hefty returns while she had access to insider information that would have been illegal for an average citizen to trade with.

“Undisturbed by a potential conflict of interest the Pelosis purchased 5,000 shares of Visa at the initial price of $44 dollars. Two days later it was trading at $64. The credit card legislation never made it to the floor of the House,” Steve Kroft of “60 Minutes” reported.

At that time, Pelosi was asked about her position as House Speaker and inside knowledge that she had to invest in IPOs.

Here’s how that went when Kroft confronted Pelosi at a regular press conference after she declined an interview.

Kroft: Madam Leader, I wanted to ask you why you and your husband back in March of 2008 accepted and participated in a very large IPO deal from Visa at a time there was major legislation affecting the credit card companies making its way through the —through the House.

Kroft: And did you consider that to be a conflict of interest?

Pelosi: The — y — I — I don’t know what your point is of your question. Is there some point that you want to make with that?

Kroft: Well, I — I — I guess what I’m asking is do you think it’s all right for a speaker to accept a very preferential, favorable stock deal?

Kroft: You participated in the IPO. And at the time you were speaker of the House. You don’t think it was a conflict of interest or had the appearance–

Kroft: — of a conflict of interest?

Pelosi: —it doesn’t — it only has appearance if you decide that you’re going to have — elaborate on a false premise. But it — it —  it’s not true and that’s that.

Kroft: I don’t understand what part’s not true.

Pelosi: Yes sir. That — that I would act upon an investment.

The Hoover Institution’s Peter Schweizer stressed that what Pelosi did was completely legal.

“… Insider trading on the stock market. If you are a member of Congress, those laws are deemed not to apply,” Schweizer added. “The fact is, if you sit on a healthcare committee and you know that Medicare, for example, is — is considering not reimbursing for a certain drug that’s market moving information. And if you can trade stock on — off of that information and do so legally, that’s a great profit making opportunity. And that sort of behavior goes on.”

Of course, Pelosi’s office issued a statement following saying, “It is very troubling that ‘60 Minutes’ would base their reporting off of an already-discredited conservative author who has made a career out of attacking Democrats.”

No, it’s troubling that a criminal, corrupt woman would use her position as Speaker of the House to make a ton of money when she would side with those who would criminalize that very thing if it were an ordinary citizen.

Can you say oligarchy?

Clearly, we need a special counsel to spend millions of American dollars to find out just how Pelosi acquired all her fortune and to determine whether or not she acted criminally.  We don’t need that really.  We all know this woman is as crooked as a dog’s hind leg and that she needs to not be given a gavel, but a noose and a long drop from a short rope.