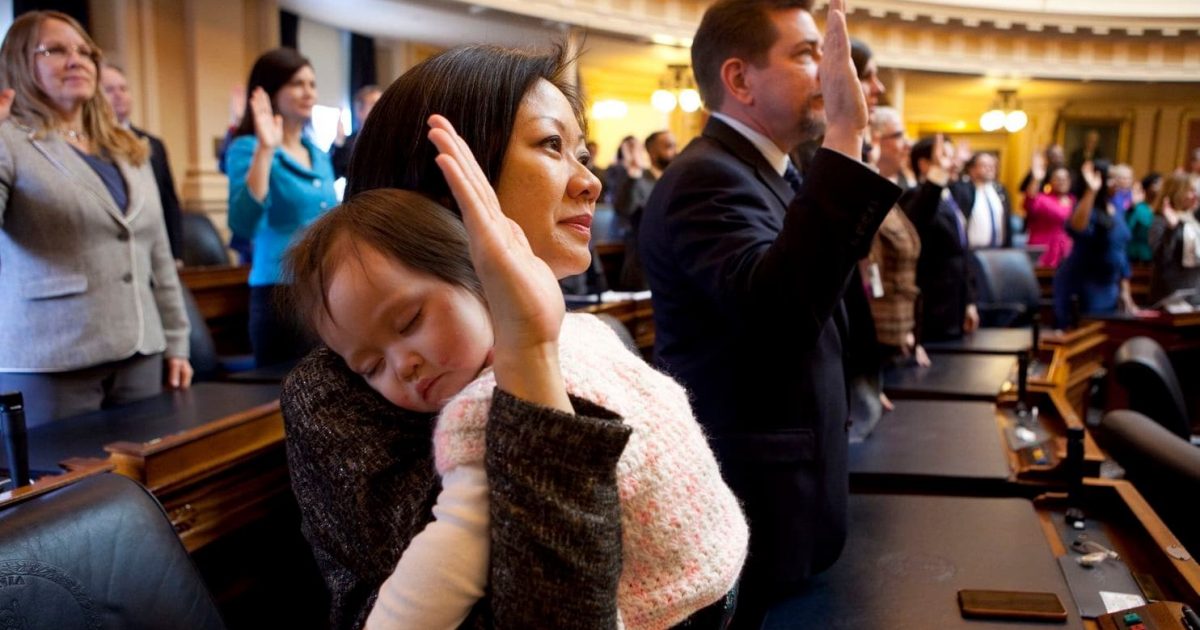 “You reap what you sow: Life is like a boomerang. Our thoughts, deeds and words return to us sooner or later, with astounding accuracy.”

Just this last week, we saw hypocrisy on full display by those who are called to represent the American people by upholding constitutional law, namely that of Representative Kathy Tran from Virginia.

After being sworn in, with her beautiful baby in her arms, to uphold the law, she then does just the exact opposite by advocating and pushing to tear that law which preserves life. Kathy Tran wants to allow the murder of human babies even up to the day that they are born.

Somehow or another, Americans have accepted this type of criminal behavior because the government said so in the sanctioning of the murder of the innocent in the womb by calling it a “woman’s choice.”  There is nothing legal about it and they know it, and so do you (Exodus 20:13; Proverbs 6:17).

Can you imagine the Mainstream media’s outcry if I reversed all of this in calling for Kathy Tran’s execution, or that of some sort of animal brutality?

What most people did not realize is that this said Representative Kathy Tran of Virginia also introduced a bill to protect moths.

Whereas 2491 puts to death a baby about to be birthed, the other intends to protect insects. Included in the significant group are “gypsy moths” and “cankerworms.”

In the aftermath of endorsing murder, Kathy’s wholly deleted herself from social media.

Are these not also the same reprobates and criminals attempting to disarm the American people?  Why, yes, they are.  As matter of fact, look to Kathy Tran’s delegate page in promoting her efforts and pay close attention to her blatant hypocrisies.

“For Kathy, enacting common-sense gun violence prevention measures means protecting our children and our communities. Parents should not have to worry if their kids will be safe when they send them to school or when they go outside to play.”

Kathy is the one advocating for abortion up to birth and yet, she claims that she wants to protect your children (Isaiah 5:20)?

“As Delegate, Kathy fights to keep guns out of the hands of criminals, domestic abusers, and those with severe mental illness” (Psalm 94:20).

Attempting to disarm the American people in the face of those who they are illegally alluring in, namely Muslims from the Middle East that are calling for the beheadings of the infidels that are here in America.

And slay them wherever you come upon them, and expel them from where they expelled you; persecution is more grievous than slaying. But fight them not by the Holy Mosque until they should fight you there; then, if they fight you, slay them — such is the recompense of unbelievers — Koran 2: 191

This is the recompense of those who fight against God and His Messenger, and hasten about the earth, to do corruption there: they shall be slaughtered, or crucified, or their hands and feet shall alternately be struck off; or they shall be banished from the land. That is a degradation for them in this world; and in the world to come awaits them a mighty chastisement,… – Koran 5:33

I am with you; so confirm the believers. I shall cast into the unbelievers’ hearts terror; so smite above the necks, and smite every finger of them!’ – Koran 8:12

So, I ask, is anyone seeing the correlation and the “astounding accuracy” of reaping and sowing here (Genesis 1:29; Galatians 6:7-8)?  The American people stand back and allow these criminals to sow corrupt seeds and then, when the corrupt harvest comes, they wonder why they are reaping it. They allow corrupt seeds to be sown, and then reap a corrupt harvest.

No surprise here. Americans have allowed 60 million babies to be murdered in the womb since 1973, that is to the equivalent of 18 states in population.

The French revolution will be a day in the park to what is coming upon America. Can you imagine the harvest that we are going to reap (Isaiah 26:9)? Because it is coming!

Representatives sow the murder of the innocent in beheadings, dismemberments, and even selling their body parts for 46 years and what follows?
Most Americans do nothing to protect the innocent in the womb.

“And I will set my face against you, and ye shall be slain before your enemies: they that hate you shall reign over you; “ (Leviticus 26:17)

What is happening in this country is nothing short of daring the justice of God, and you can rest assured that Americans, as well as Representatives, are going to get a response and it will be a response many will wish that they had prevented by obeying the Lord in the first place (Amos 4:12, 7:8, 9:2-4).