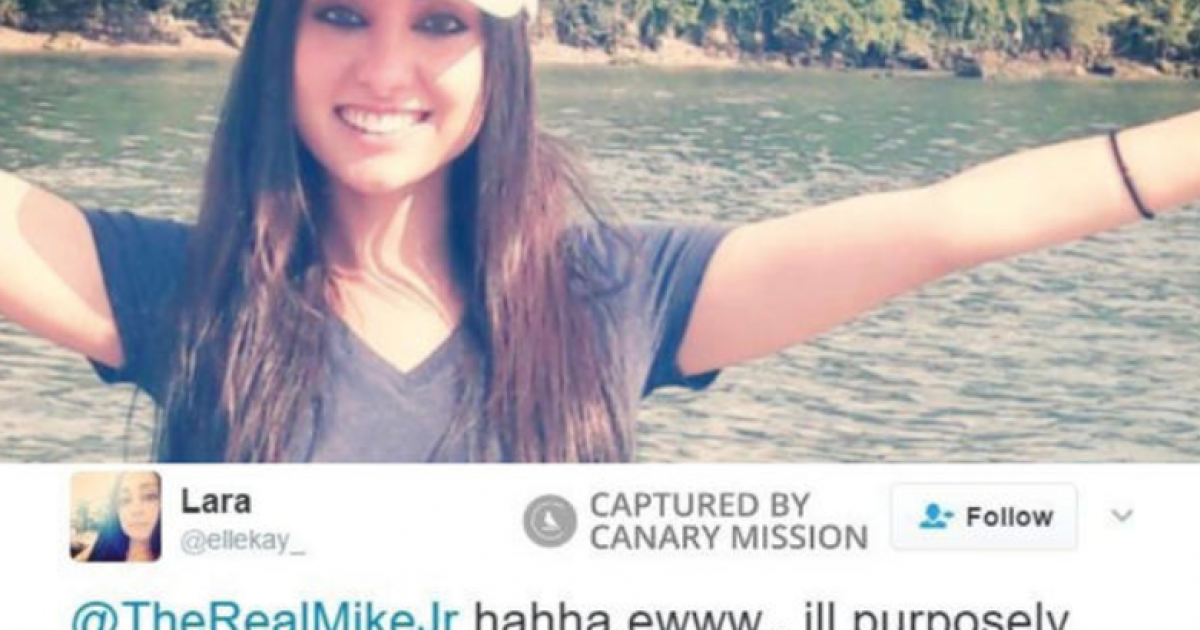 The Jerusalem Post reported on January 16 that the “Jewish-American advocacy group Proclaiming Justice to the Nations [PJTN] filed a complaint with the state of Ohio Medical Board insisting the medical license of Dr. Lara Kollab [be revoked] after it was revealed she tweeted she would provide Jewish patients under her care with the wrong type of drugs.”

Now a month has passed, and there is no indication that Lara Kollab’s medical license has been revoked. Also, why did a complaint have to be filed at all? Why didn’t the Ohio Medical Board revoked her medical license immediately?

Kollab was, up until quite recently, a doctor of osteopathic medicine at the Cleveland Clinic. But then Canary Mission published a report on her fiendishly hateful anti-Semitic tweets, including one in which she declared that she would “purposely give all the yahood [Jews] the wrong meds.” In another tweet, she wrote: “Studying for my med micro final, came across this. Clearly, I pay attention in class and write very useful notes.” Accompanying that tweet was a handwritten note that read: “People who support Israel should have their immune cells killed so they can see how it feels to not be able to defend yourself from foreign invaders.”

Kollab’s Twitter feed was a cesspool of hatred for those she called “Jewish dogs.” In another tweet, she said: “walking through the streets of palestine is funny- every person who gets mad says something along the lines of ‘Allah yo5odhom el yahood’ [Allah will take them, the Jews].” She reveled in her own hatred: “so basically every mseba [insult] I say is directed at the yahood [Jews] haha. even if I do something really stupid I say ‘hebel yihbilhom el yahood’ [stupid stupid Jews] hehe.”

It isn’t surprising that a devout and observant Muslim would have a seething hatred of Jews. The Qur’an tells Muslims that the Jews are the strongest of all people in enmity toward them (5:82), are accursed by Allah (9:30), and are always scheming against the Muslims (2:79; 3:75-3:78, 3:181, etc.). There is a great deal more anti-Semitic material in the Qur’an and Sunnah. These and other Qur’anic passages likely provide some insight into Kollab’s mindset.

But in the Hippocratic Oath, doctors pledge that they will “do no harm or injustice” to their patients. Kollab not only repeatedly expressed her vehement hatred for Jews, but actually stated explicitly that she would give them the wrong medicine in order to do them harm.

So why did this complaint need to be filed? Why hasn’t her medical license been revoked already?

“As a girl in my teens and early twenties,” she explained, “I had difficulty constructively expressing my intense feelings about what I witnessed in my ancestral land. Like many young people lacking life experience, I expressed myself by making insensitive remarks and statements of passion devoid of thought, not realizing the harm and offense these words would cause.”

Laying it on thick, she added: “These posts were made years before I was accepted into medical school, when I was a naïve, and impressionable girl barely out of high school. I matured into a young adult during the years I attended college and medical school, and adopted strong values of inclusion, tolerance and humanity. I have learned from this experience and am sorry for the pain I have caused. I pray that the Jewish community will understand and forgive me. I hope to make amends so that we can move forward and work together towards a better future for us all.”

As heartfelt and sincere as this may seem, it is noteworthy that Kollab never saw fit to say anything like it until her hate-filled tweets came to light. If she really had this change of heart, why didn’t she delete her old tweets and apologize for them before Canary Mission found them? Her apology has the look of damage control rather than a genuine change of heart.

Is the Ohio Medical Board prepared for the possibility that Lara Kollab’s apology is insincere?

Will the Ohio Medical Board be held accountable if it allows her to continue practicing medicine, and one of her Jewish patients is injured or dies while under her care?

If Lara Kollab had been a Jewish or Christian (or Hindu, or Buddhist) doctor who wrote about giving Muslims the wrong medication, would there be any question about revoking her medical license?

The Ohio Medical Board should revoke Kollab’s license immediately, before it becomes too late for someone for whom she is “caring.” Indeed, it should already have done so.