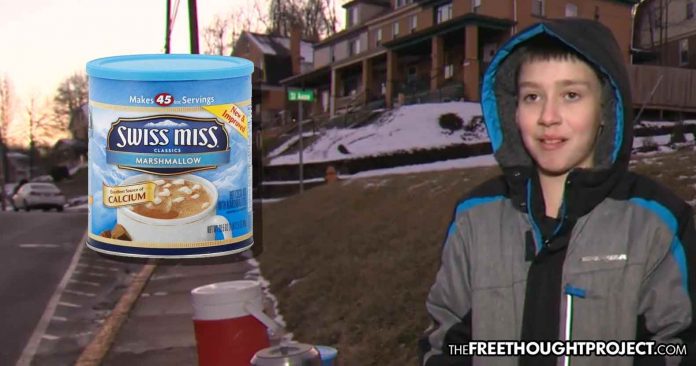 Castle Shannon, PA — As the Free Thought Project reported last year, 2018 was the year of the snitches as neighbors turned in fellow neighbors to authorities for selling water, lemonade, or for simply being black at your own apartment complex pool. This see something say something society is the wet dream of the authoritarian and as a recent case of a boy selling hot chocolate in Pennsylvania illustrates, it is showing no signs of slowing.

One would think that in the ostensible land of the free, a little boy selling hot chocolate to willing customers to warm them up on a winter’s day would never be an issue over which people would call the police. However, one would be wrong.

Andrew Donaldson, of Castle Shannon, received a hefty dose of the see something say something state earlier this month when his hot chocolate sales landed him in the cross hairs of police state dependent neighbors.

“A lot of times, I make over $50, and I do pretty good,” Andrew said, who has sold hot chocolate outside of his home on multiple occasions without incident.

“I was kind of bored, so I was like, I can just come out and do something, so I came out and sold hot cocoa,” Andrew said.

After becoming tired of wasting time not doing anything, Andrew grabbed his supplies and table and went to selling some hot chocolate. However, on this day, he’d be visited by police.

Just as soon as he set up his stand, Andrew found himself being questioned by the fuzz.

“They asked if I was by myself, and I said, ‘No, the babysitter is in the house,’” Andrew said.

The two officers told Andrew’s parents that a neighbor called police because Andrew was outside in the cold selling hot chocolate and were allegedly concerned about the temperatures. Apparently, these neighbors were too busy to visit Andrew themselves, so they had armed agents of the state do it for them.

When they showed up, these armed agents of the state did something pretty awesome, however. Instead of shutting Andrew’s operation down and telling him to go inside, they became customers.

After the officers confirmed Andrew was just fine, he offered them each a cup of hot chocolate—on the house. But the officers paid him anyway.

“They paid even though he insisted it was free. So, I thought that was really nice of them,” Rebecca Lukens, Andrew’s mom, said.

“Whoever called the cops on him are the real MVPs because we learned that the local police were really friendly,” Lukens said, trying to make light out of her neighbors snitching on a child for selling hot chocolate.

Showing what a stand up family Andrew and his parents are, as KCCI reports, Andrew said his parents taught him to save a little, spend a little and share a little, so he donates some of his earnings to an animal shelter.

While the cops who visited Andrew used common sense and were nice, other folks who’ve had police called on them for trying to earn a dollar were not so lucky.