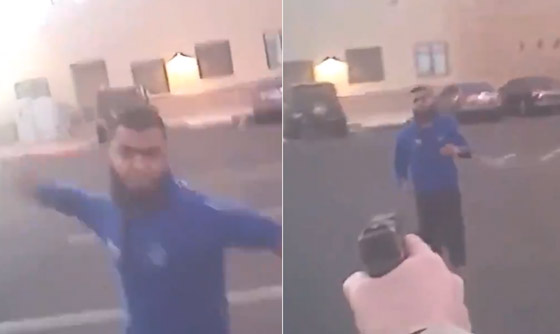 The media is quick to pounce on narratives that serve their agenda, but when it comes to actual news stories about the dangers of real hate and terrorism in America they are often silent.

This is the case with the following report, which apparently was so damaging to the mainstream agenda that not only did they refuse to cover it, but Maricopa refused to release the video until they were sued.

In the video, an individual is confronted by a Maricopa County, Arizona officer. The individual, as seen below, first indicates to the officer that he wants to “talk about” political issues.

All seems well for about 20 seconds, when the man seems to completely lose his marbles when asked to produce identification. He first begins throwing rocks at the officer, then pulls a knife, at which point things take a turn for the worse for this peaceful protester:

How many heard about this? County had to be sued to release the info.

Ismail Ahmed stated he wanted to do something in protest on behalf of the people in Palestine & Middle East pic.twitter.com/fHy2x3qapn

Why it was so difficult for Maricopa County to release this video remains a mystery.