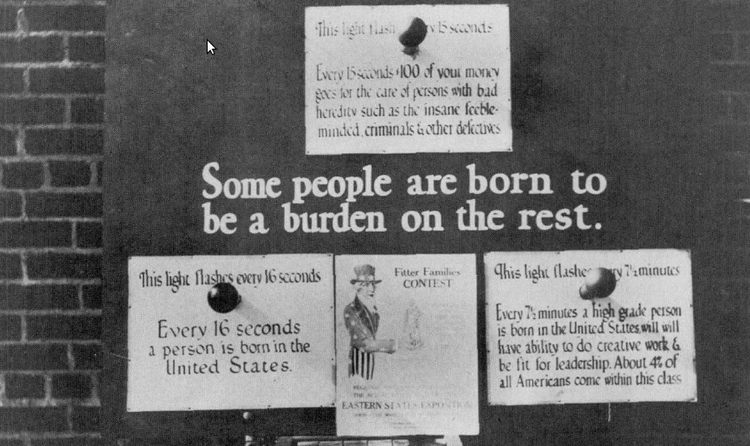 I’m not saying that the well-funded publicly promoted and celebrated American Eugenics Movement wasn’t covered in my high school American History class.  But I feel like I’d remember learning about it.  I still shudder when I think of about the book, The Scarlet Letter.  It was only the last few years that remember seeing news coverage about states that once had laws allowing forced sterilizations.  These were apparently part of the American Eugenics movement.  Some people who were forcibly sterilized during that time period are being financially compensated.

I discovered it a couple weeks ago while channel surfing.  My jaw dropped, stayed dropped, and I don’t know how many times I muttered, “Oh My God.”  I ended up watching all of it because I couldn’t stop watching it.  The United States was the first to publicly promote and champion Eugenics – not Nazi Germany.  Wealthy, influential, and highly educated Americans were involved including John Harvey Kellogg (Kellogg Foods) and Margaret Sanger. Elected officials were obviously involved too.

The Nazis took from our playbook and then went even further.  After World War II, they referenced the American Eugenics movement to defend themselves.

The Eugenics Crusade tells the story of the unlikely –– and largely unknown –– campaign to breed a “better” American race, tracing the rise of the movement that turned the fledgling science of heredity into a powerful instrument of social control.

Perhaps more surprising still, American eugenics was neither the work of fanatics, nor the product of fringe science. The goal of the movement was simple and, to its disciples, laudable: to eradicate social ills by limiting the number of those considered to be genetically “unfit” –– a group that would expand to include many immigrant groups, the poor, Jews, the mentally and physically disabled, and the “morally delinquent.” At its peak in the 1920s, the movement was in every way mainstream, packaged as a progressive quest for “healthy babies.” Its doctrines were not only popular and practiced, but codified by laws that severely restricted immigration and ultimately led to the institutionalization and sterilization of tens of thousands of American citizens. Populated by figures both celebrated and obscure, The Eugenics Crusade is an often revelatory portrait of an America at once strange and eerily familiar.

So there’s no more eugenics in the U.S, right?  Wrong.

U.S. laws no longer protect forced sterilization. However, between 2006 and 2010, more than 130 women in California prisons were sterilized illegally, in violation of the state’s informed consent law, according to the Center for Investigative Reporting.