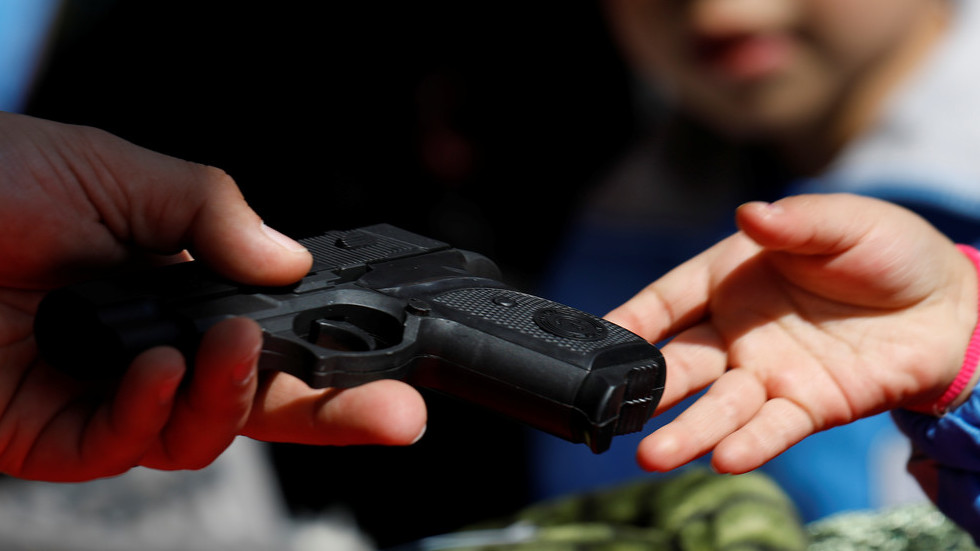 A school running a community arts center in Ohio was forced to stop advertising a party game where kids are instructed to ‘eliminate’ the president with toy guns, after it sparked national outrage.

The game entitled ‘President’ had been advertised as a part of Nerf gun-themed party organized by the Olmsted Performing Arts community center in Berea, a suburb of Cleveland.

“There is one president with body guards. Everyone else tries to eliminate or shoot the president,” read the description of the game on the center’s website, since deleted.

The brief description doesn’t include any specific reference to President Donald Trump, but the tense environment around his presidency, complete with high-profile threats, helped create concern and outright anger among the community, believes Ohio resident Julie Berghaus.

“I think it’s unfortunate that they chose that kind of theme only because of the atmosphere we are living in now,” she told WJKW-TV, a local Fox affiliate. “For kids, it’s just fun, but they don’t realize what they are being taught subconsciously,” she added.

Her concerns have been matched by people outside of the Cleveland area who saw the message of the game as anything but harmless fun. Some took to Twitter to voice their concerns.

And people are focused on inconsequential things like video games. Focus on the people who interact and influence children in the real world. The game of cops and robbers that I played as a kid is harmless compared to this game.Only way to affect change is to not give them your $

Completely inappropriate. We no longer show respect for authority in this country. What message are we teaching our kids!!!!

While there is no direct evidence to suggest that those who came up with the game were Democrats or aiming to indoctrinate children against the current POTUS, many critiqued those whose had heightened sensitivities during Obama’s presidency but had seemingly disappeared when Trump took office.

How can this be ok? Can anyone imagine the outrage had this gone on during Obama presidency? Ohio Community Center Offers Kids “Shoot The President” Nerf Party: https://t.co/zEVREQIMBW

Others pointed to the hypocrisy of those who claim to be vehemently opposed to firearm ownership being suspiciously silent on gun violence when the target is a political opponent.

So all of a sudden guns are good now, with the DNC?

The only time the Left won’t be angry at the parents for allowing children to play with toy guns. https://t.co/PX16YLYmDs

The director of the Baldwin Wallace Community Arts School (the organization that owns the community center), Adam Sheldon, responded to the outrage on Twitter by offering an apology. The game has since been scrubbed from the website along with the entire section of the website which had advertised Nerf-gun themed parties.

As soon as it was brought to our attention BW CAS removed the party theme from the OPA site. We apologize to anyone who was offended by the presence of this theme; it does not reflect BW’s values in any way.