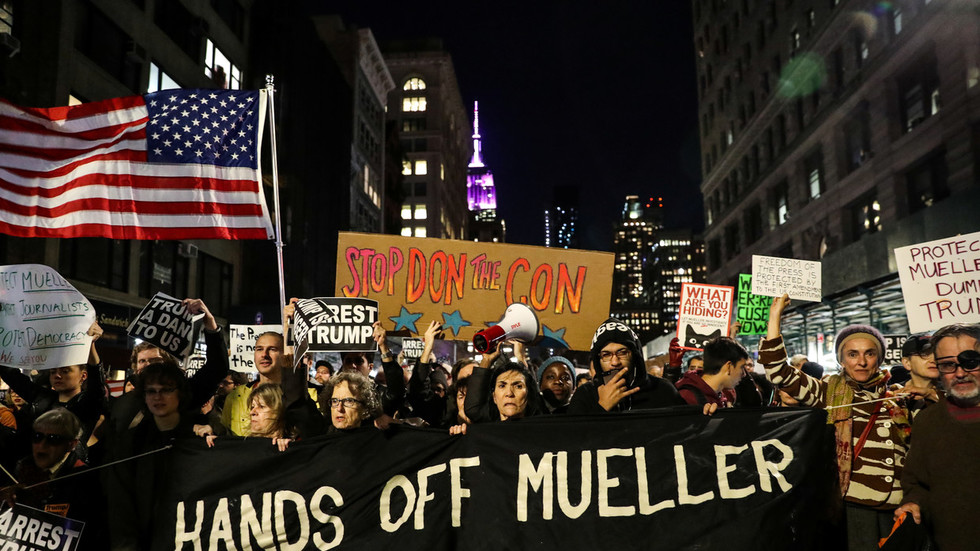 As Special Counsel Robert Mueller prepares to issue his long-awaited and likely flaccid ‘Russiagate’ report, Democrats and their supporters in the media have been riding a rollercoaster of emotions, not all of them pretty.

Set up in 2017 to investigate rumors of collusion between the Trump campaign and Russia, Mueller’s investigation is set to close in a matter of days, with a final report expected shortly afterwards.

Although a handful of key Trump associates, like former campaign manager Paul Manafort and Republican operative Roger Stone, have been charged with process crimes, nobody has been charged with any offenses relating to collusion.

Former Director of National Intelligence James Clapper – himself no fan of Trump – told CNN on Wednesday that “the investigation, when completed, could turn out to be quite anti-climactic.”

An anti-climactic conclusion would spell disaster for Trump’s opponents in Washington, who have hammered the president for ‘Russian collusion’ for the better part of two years, and for the media, who have never missed a chance to add to the narrative, often with false and outlandish theories.

With Mueller’s report unlikely to satisfy their appetite for collusion, Democrats and the media have been going through a bizarre grieving process in recent days, as they get ready to bid farewell to their dear old friend Mueller.

The process is best explained using a time-tested psychological model. Much like a grieving family adapts to the loss of a loved one, Mueller’s fans now have a long and rough road to recovery ahead of them. Here’s what they can expect:

Denial is, for many people, the first stage of grief. As news circulated of the Mueller investigation’s impending conclusion, former FBI number 2 Andrew McCabe appeared on CNN to give viewers a lifeline, saying “it’s possible” that Trump is working on behalf of the Russian government.

McCabe has said "it's possible" Trump is a Russian asset: https://t.co/Z60SqLfC5Y pic.twitter.com/gbOMgplfoF

McCabe, who admitted last week that he opened the first iteration of the Trump/Russia investigation without any hard evidence, called the accusations against Trump “extraordinary,” and “something we should all be concerned about,” again without any evidence.

Similar reports abound in the media. “Trump must be a Russian agent,” read a headline last month from Wired, because “the alternative is just too awful.”

Wired’s logic states that if the president isn’t aiding Russia through malevolence, then he must be doing it through incompetence.

“No evidence has emerged publicly,” linking Trump with Russia, the article states, “But there are plenty of bread crumbs pointing to the idea that such evidence exists secretly, with investigators.”

There’s loads of evidence, but you can’t see it, because it’s a secret. Okay.

As McCabe writes in #TheThreat (can’t find page so paraphrasing): even if Mueller is fired, this doesn’t end. The case exists in too many brains now for it to go away. Trump will spend the rest of his life either in prison, in court, or on the run.

Denial soon gives way to anger. As always, Twitter is chock-full of that. Regardless of the report’s conclusions, the loudest voices in the anti-Trump #resistance foresee “further damage,” “civil war 2.0,” and even Trump declaring martial law and turning “what’s left of our democracy in(to) North Korea,” for some reason.

I am incredibly stressed about the mueller report. If it’s damning then Alex Jones will try to start Civil War 2.0 and if by some weird possibility it exonerates trump then trump will go full banana republican kleptocrat and turn what’s left of our democracy in North Korea.

In fact, Mueller report or no Mueller report, it is absolutely evident that no American in our history has betrayed the country as egregiously or damagingly as Trump and that it is vital that we recognize this fact or the risks of further damage will be compounded.

Trump keeps doing the same s**t over and over again,” said the Daily Show’s Trevor Noah. “It’s like that Netflix show Russian Doll, only with way more Russians.”

Some Russiagaters have taken to bargaining to cushion the blow. What if Mueller wasn’t allowed to investigate thoroughly enough? What if he’s still waiting to charge the big players? What if he was actually a pro-Trump stooge all along?

Rep. Eric ‘nuke the citizens’ Swalwell was among the first to cast these kind of doubts. “What makes you so confident this report is on Mueller’s terms and timetable,” the California Democrat suggested.

Although some have suggested that Mueller is prematurely ending his investigation before Trump’s new Attorney General William Barr can shut it down, Swalwell will have more humble pie than most to eat if the report exonerates Trump, given that he’s sworn on national television that Trump “knows exactly what he’s doing” in pushing the Kremlin’s agenda.

Here, @RepSwalwell – as he's been doing for 2 years – spreads baseless insinuations, this time to suggest that Mueller is being involuntarily silenced, forced to end his investigation. If that were true, & Mueller has said nothing, wouldn't that reflect poorly on his integrity? https://t.co/XDEhsAtr8Q

Others reassured themselves by saying that Mueller is still sitting on a mound of sealed indictments, ready to hand them over to other courts when his investigation wraps up.

Possible that Mueller is preparing to hand dozens to a hundred sealed indictments to regular offices when he unseals; the Attorneys on his team are appellate specialists, I believe. E.G. Dana Boente at EDVA obtained the sealed indictment on @Trump (covering @realDonaldTrump)

Trump must be getting so stressed about Mueller’s investigation and likely upcoming sealed indictments against Steve Bannon and Donald Trump Jr. that he’s taking all his angst and frustration out on people who aren’t even relevant to him anymore. It’s psychological displacement.

Don’t hold your breath. Even late last month the virulently anti-Trump Alternet swore up and down that “Mueller’s next indictment will tie together the Russians, WikiLeaks and the top of the Trump campaign.” It never came.

Faced with the possibility that nearly two years of Russian hysteria could amount to basically nothing, some media outlets have struck a despondent tone.

CNN has begun contemplating "Life without Mueller." I predict a prolonged period of agony followed by clinical depression pic.twitter.com/z9d6EPbcLz

A CNN report published Wednesday contemplated “Life after Mueller,” while another concluded that the Mueller report “won’t change the minds of most people following the story.”

“For people who already hate Trump, they will see the Mueller report as confirmation that the President was compromised by the Russians,” it read. “For Trump’s backers, they will dismiss the whole thing – aping their idol – as a ‘witch hunt’ and a ‘hoax.’”

A damp squib report will likely hit CNN hardest. After all, the network has breathlessly reported every minor development in the investigation for almost two years, and even got front row seats to the gunpoint arrest of Roger Stone. What hope is left once Mueller is gone?

I don't see Mueller taking down anyone named Trump or Kushner. Life in the U.S. has already gotten almost unbearable. It is about to get exponentially worse. Please let me be wrong. I am getting more depressed by the minute.

I honestly think that if the Mueller investigation really does end next week as CNN and WashPost are claiming, and nothing major changes (such as, say, Trump Jr. or Jared's arrest), they should send therapy dogs to the MSNBC & CNN headquarters to help with the coping process. https://t.co/rA8GiZ6Oz3

Finally, after all the tears and all the sleepless nights comes acceptance. Democrat Rep. Ted Lieu (California) said on Wednesday that “if the report comes out and exonerates Donald Trump, we just move on.”

"The best possible result would be if Robert Mueller found Donald Trump completely innocent because I don't want our President to have engaged in collusion with a foreign power," says Democrat Rep. Ted Lieu. "If the report comes out and exonerates Donald Trump, we just move on." pic.twitter.com/P2D6jiEv8M

Some Democrats have other ideas. House Intelligence Committee chair Adam Schiff (Massachusetts) has already criticized Mueller for not being thorough enough, and has opened an investigation into “credible reports of money laundering and financial compromise” involving Trump’s businesses.

The probe will go “beyond Russia” and investigate whether “the Saudis or anyone else” has leverage over Trump, Schiff told reporters.

To “time for Schiff and co. to investigate Trump-Russia ties, also his taxes, other stuff”

Mueller may be ready to step down, but expect more investigations, more accusations, and more good old fashioned Russiagate drama in the media for the foreseeable future.