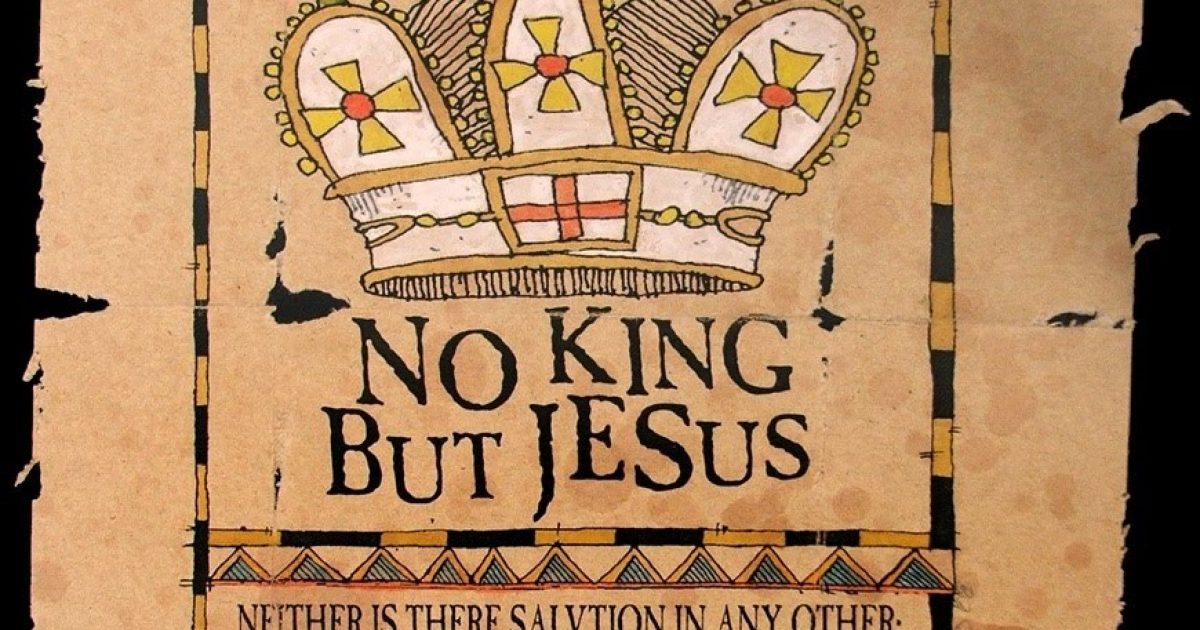 “We Have No King But King Jesus!” -The historic battle-cry of our Christian Forefathers

Last week I wrote an article titled “Tyrants destroying Law Through Policy and then Calling It Peace!” And with that, I saw that my cup was running over while receiving illumination to do a bit more on this exposition (John 7:38), as Scripture states, “Freely you have received; freely give” (Matthew 10:8).

I started off my column:

“True revolutionaries do not flaunt their radicalism,  they cut their hair, put on suits and infiltrate the system …” –Saul Alinsky

Americans have been so “Hollywoodized” that they think that the devil is going to come to them with a rack of horns on his head and a pitchfork in hand to steal, kill and destroy (John 10:10). Scripture teaches us the opposite.

Those that were approved of the Lord, those who were warning the people to flee from the wrath to come, and those who were proclaiming God’s truth were carpenters, fisherman, tax collectors, foolish (1 Corinthians 1:27), and unlearned men (Acts 4:13), weak, as well as men dressed in the attire of camel’s hair, leather belts, eating locusts and wild honey (Matthew 3:7).

In contrast, those that were highly esteemed (Luke 16:15) and approved of among men (Are you listening, America?), Jesus was damning

“Woe unto you, scribes and Pharisees, hypocrites! for ye are like unto whited sepulchres, which indeed appear beautiful outward, but are within full of dead men’s bones, and of all uncleanness.” -Matthew 23:27

“Woe unto you, lawyers! for ye have taken away the key of knowledge: ye entered not in yourselves, and them that were entering in ye hindered.” -Luke 11:52

And I ask, how many in the American Church and American politics fit the physical and mental characteristics of those whom God was damning?

Jesus also said, “Verily I say unto you, that the publicans and the harlots go into the kingdom of God before you” (Matthew 21:31).

And as I was writing out this Holy Ghost download (Matthew 16:18; Acts 2:36) that I was receiving, I immediately began to realize that this is happening because people that profess to be Christians do not even know the Scriptures (John 7:17), which, in fact, is a lack of Christianity (1 John 2:4). They think that because someone claims to be a Christian, then it must be so. Remember, no one rebuked the religious hypocrites more than Jesus (Matthew 23).

“Thus saith the LORD; Cursed be the man that trusteth in man, and maketh flesh his arm, and whose heart departeth from the LORD.” -Jeremiah 17:5

These hypocrites have exchanged the King that has bought them with His own blood (1 Corinthians 6:20; 1 John 2:2) for a  fallen and reprobate man that sells them out (Luke 22:48).

Instead of man submitting to the Lawgiver, they slavishly serve the lawbreakers (Isaiah 14:12-15).

Instead of them serving out of love the One that cannot and will not lie (Numbers 23:19), they submit to those who lie on a daily basis.

Instead of man submitting to the immutable God (Hebrews 6:18), they submit to fallen man and every wind of his made up doctrine, the sleight of men and their cunning craftiness as they continuously deceive.

“That we henceforth be no more children, tossed to and fro, and carried about with every wind of doctrine, by the sleight of men, and cunning craftiness, whereby they lie in wait to deceive;” -Ephesians 4:14

On the other hand…

“Blessed is the man that trusteth in the LORD (And magnifies His government), and whose hope the LORD is.” -Jeremiah 17:7

Friends, no matter who the president is (Romans 13:3-4) remember, he has no title of nobility (Article 1, Section 9, Clause 8, US Constitution).

Another way of saying this is either Jesus is your King, or your man made king will be your god (Exodus 20:3).

On April 18, 1775, John Adams and John Hancock were at the home of Rev. Jonas Clarke, a Lexington pastor and militia leader. That same night Paul Revere arrived to warn them of the approaching Redcoats. The next morning, British Major Pitcairn shouted to an assembled regiment of Minutemen:  “Disperse, ye villains, lay down your arms in the name of George the Sovereign King of England.”

The immediate response of Rev. Jonas Clarke or one of his company was:

“We recognize no Sovereign but God and no King but Jesus.”