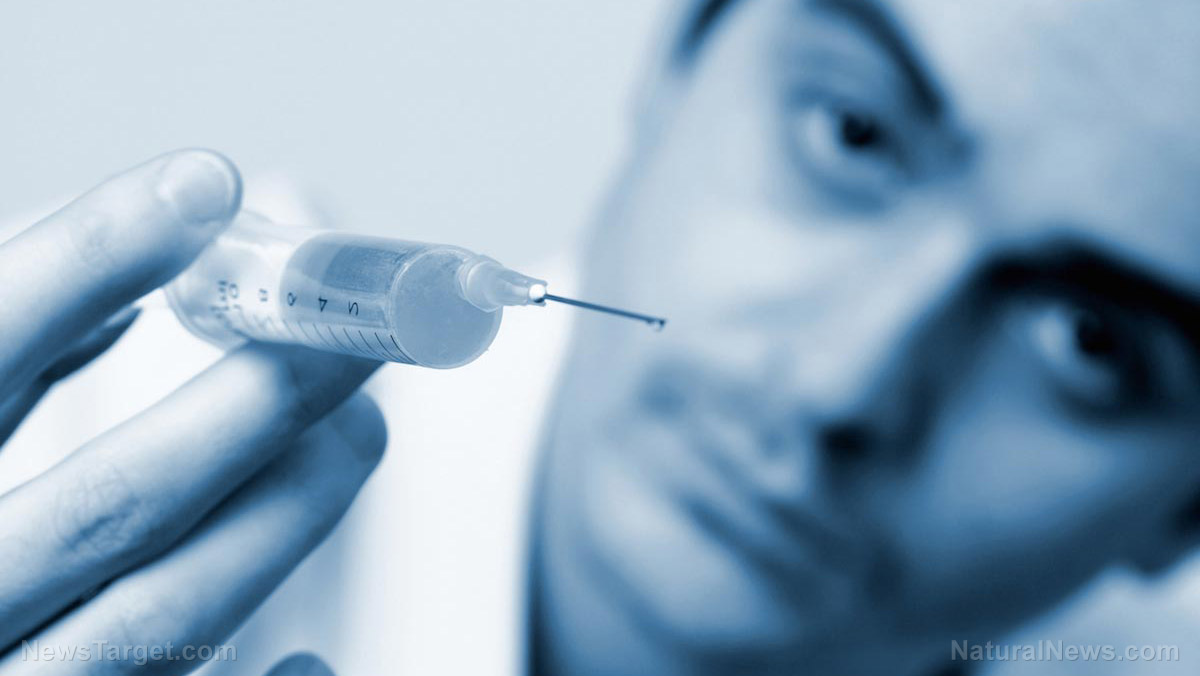 (Natural News) One of the most astonishing truths of our modern information age is that the vaccine truth movement is winning the information war, despite the incessant, coordinated censorship of nearly all online content that questions the supposed “safety” of vaccines.

The “vaccine deep state,” as I have called it, now finds itself in an all-out panic. The CDC and Big Pharma propagandists have been waging a desperate war to pressure the tech giants into censoring all information that questions the official vaccine narrative. Pinterest is in such a panic that they blocked all searches on vaccines, and Facebook has announced they’re going to start blocking all content that questions vaccine safety. YouTube also just initiated a massive site-wide demonetization of vaccine skeptics’ videos, while burying those videos in search results for good measure.

The desperation is clear: The vaccine industry absolutely cannot allow people to question the propaganda of the vaccine deep state, which depends on ignorance and lies to maintain its own existence. No scientific questions are allowed, since the vaccine industry isn’t based on science… it’s a dangerous dogma, and dogmas are not allowed to be questioned (or they might implode).

That’s why we all need to keep asking questions like:

The vaccine industry won’t debate any of these questions. Instead, they silence all vaccine skeptics and mandate dangerous vaccine injections at gunpoint. Then they feign astonishment that people don’t believe their “science” …

The FDA says it may force nationwide vaccines of all children, essentially at gunpoint

Now, the FDA is threatening to enforce nationwide vaccine mandates, essentially at “gunpoint” (meaning the government will use coercion and threats to force vaccine injections onto children). Alex Newman from The New America has penned an outstanding essay that explains the medical tyranny behind this recent push. We’re publishing part of his noteworthy article here.

FDA Boss to States: Eliminate Vaccine Exemptions, or Else

by Alex Newman, The New American

Unable to convince Americans to fully trust vaccines with endless marketing propaganda and even government mandates, Food and Drug Administration boss Scott Gottlieb (shown) is now threatening to use federal force. Indeed, in bizarre comments made to national media, the senior health bureaucrat threatened that growing nationwide resistance to vaccination mandates may “force the hand of the federal government.” In short, Gottlieb wants to force states to vaccinate children, even if it goes against the religion or conscience of the parents. Critics lambasted the comments and the sentiments as authoritarian and unacceptable.

One obvious problem with Gottlieb’s threats is that the federal government has no power to mandate vaccines or tell states what to do on the issue. In fact, according to the U.S. Constitution’s 10th Amendment, all powers not delegated to the federal government are retained by the states or the people. Of course, vaccine mandates are not listed as a federal power; therefore, as the Supreme Court has recognized, this is a state issue. Another problem for Gottlieb’s agenda is that his own boss, President Donald Trump, has repeatedly suggested that vaccines may not be as safe and effective as Big Pharma and its government cronies want people to think they are.

But none of that appears to have phased the federal government’s top “food and drug” bureaucrat. Speaking to CNN, a media outlet described by Gottlieb’s boss Trump as “very fake news,” the FDA commissioner tried to make his case for federal intervention. “Some states are engaging in such wide exemptions that they’re creating the opportunity for outbreaks on a scale that is going to have national implications,” he claimed this week, adding that if “states continue down the path that they’re on, I think they’re going to force the hand of the federal health agencies.”

No specifics were provided, with Gottlieb saying only, “You could mandate certain rules about what is and isn’t permissible when it comes to allowing people to have exemptions.” Right now, only three states do not allow non-medical exemptions. But Gottlieb said he is “deeply skeptical” of those exemptions.

Before that, Gottlieb made similar comments to Axios last week, exploiting a handful of measles cases — many of them in vaccinated children, ironically — to push vaccination of children by fiat. “It’s an avoidable tragedy,” Gottlieb told the online news service about measles cases, adding that he is normally a proponent of states rights but not when it comes to informed consent on vaccines. “Too many states have lax laws.” Dr. Anthony Fauci, the head of the National Institute of Allergy and Infectious Diseases at the National Institutes of Health (NIH), has been making similar noise on the issue.

By contrast, on the campaign trail, their boss sounded a drastically different tune. For instance, Trump openly and repeatedly suggested that vaccines may cause autism, highlighting the growing “epidemic” that he and many other prominent voices have linked to vaccinations. Dr. William Thompson, a senior scientist at CDC, became a whistleblower after discovering that the CDC was omitting important data linking vaccines to autism. “We lied about the scientific findings,” he explained. “The CDC can no longer be trusted to do vaccine safety work.” Seizing on those concerns, among other problems with mandatory vaccination, Trump called for families to have “discretion” in decisions about whether and when to give their children vaccines. Other 2016 GOP presidential candidates agreed.

But Gottlieb’s comments come amid a broader global war on informed consent, religious freedom, and parental rights in vaccination. Citing the United Nations World Health Organization (WHO), which is run by a known communist, the New York Times published a totalitarian screed last month calling for state and federal authorities to crack down on vaccine skeptics. In the editorial, headlined “How to Inoculate Against Anti-Vaxxers,” Times called on states to emulate California, where Big Pharma-funded lawmakers eliminated personal-belief exemptions in 2015. The paper also said that “the federal government should consider tightening restrictions around how much leeway states can grant families that want to skip essential vaccines.”

Interestingly, the UN WHO, which has been caught on multiple occasions using vaccines laced with sterilizing agents in Africa and Latin America, called on governments to punish those who refuse to accept vaccines. The UN body also urged healthcare workers to lie to patients, specifically instructing them to tell concerned parents vaccines cannot cause harmful side effects, illness, and even death. In reality, the package inserts for vaccines all admit that they can cause injury or death. Even the federal government acknowledges this when it forces taxpayers — not Big Pharma — to accept the liability for injuries and deaths caused by vaccines. Billions have been paid out to victims of vaccine injuries and families of those who have died.

But critics are fighting back. President Barbara Loe Fisher of the National Vaccine Information Center (NVIC), which opposes vaccination mandates, slammed the exploitation of a few measles cases to push draconian policies. “It is highly inappropriate for federal officials, particularly the commissioner of the FDA who is legally responsible for regulating vaccines, to threaten state legislators with federal action if they do not tighten exemption laws,” she told The New American in a phone interview, adding that vaccine laws have always been a state issue dating back to a 1905 Supreme Court case. “It is our position that the federal government should not be interfering in what is clearly a state issue.” To make their point, the group put up a giant ad in Times Square demanding health freedom and urging people to research the risks associated with vaccines.

Also of great concern, she said, is that the vaccine industry is completely immune from liability when its products cause injuries and death. Instead, thanks to intense lobbying by Big Pharma, American taxpayers end up compensating victims of vaccines, a subsidy that is unique and unprecedented among any industry. “This makes personal-belief exemptions very, very important in vaccine laws,” Fisher noted. “This is an informed consent issue. And informed consent has been defined as a human right since after WWII. This is also a first amendment issue — freedom of religion and freedom of conscience are at stake. For federal officials to be rattling their swords and threatening state legislators is not appropriate — it is interfering with states rights.”

Noting that there have been just over 120 measles cases so far this year out of a population of 320 million, the NVIC chief said this was not a public health emergency of any kind. However, similar media-driven hysteria was exploited by Big Pharma allies in the California legislature in 2015 to end all personal-belief exemptions there, including religious objections. “They are using 127 cases of measles this year to do the same thing in other states,” Fisher added. And already, there are almost 115-vaccine related bills pending in state legislatures across the country, including many that would eliminate exemptions. She urged concerned Americans to get involved in the fight using the NVIC Advocacy Portal to contact their elected officials.

Read the rest of the article at TheNewAmerican.com. and be sure to follow Vaccines.newsfor daily updates on the government’s coercion, propaganda and fake science lies that are routinely being used to push toxic vaccines onto innocent children.