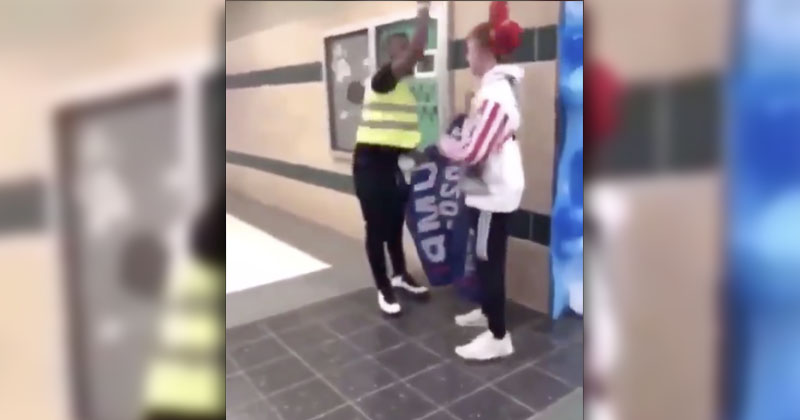 While the national media jumped on the Jussie Smollett story and ran with it without any evidence, they couldn’t care less about an alleged assault many are saying was a hate crime that was caught on video at Edmond Santa Fe High School in Edmond, Oklahoma on Monday.

Video of the assault was shared Tuesday on YouTube (Mirror):

A reported member of Edmond Santa Fe High School’s student council was recorded confronting a classmate. The 17-year-old victim is wearing a hat and flag supporting President Trump. The accused student allegedly asked a friend to record the confrontation on their phone.

In the video, the accused student wearing the yellow vest is telling his classmate to take off the hat. When the victim attempts to walk away, the other student said he will rip off the hat and flag.

Edmond district officials said the student’s reaction to grab the flag and knock the hat off is against the school’s discipline policy. […]

The accused student was issued a city summons for assault.

A search of Google News shows the story has only been covered by local media: Had the races been reversed this would be the top national news story with 24/7 wall-to-wall coverage and endless commentary on how this is “Drumpf’s Amerika,” instead it’s completely ignored with the media choosing to focus on the epidemic of “racism in the knitting community.”

Knitters are having difficult but necessary conversations about racism in the community. https://t.co/HwPZH4MYTt