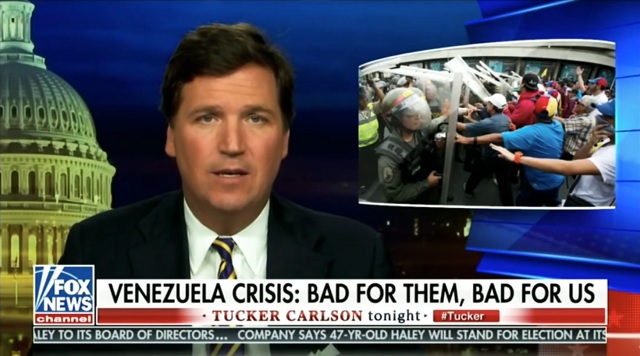 Fox News host Tucker Carlson ran two segments on his show this week questioning the wisdom of intervening in Venezuela.

On Monday, Carlson drew attention to the macabre tweet from Marco Rubio showing Muammar Gaddafi covered in blood “shortly before being tortured, sodomized and killed” and noted how Libya collapses after the Obama administration’s intervention.

“Is Libya a thriving Democracy now? No, it’s not,” Carlson said. “It is still a war-torn hellhole, worse even — slave markets thrive in its major cities.”

“Gaddafi once protected Europe from mass migration, now Libya is the main departure point for huge numbers of migrants coming into Europe illegally.”

“The lesson here is pretty obvious sometimes even horrible dictators are preferable to the chaos that replaces them. Our leaders have not learned that. How will attacking Venezuela improve this country? Will it make America safer? More prosperous? No, it won’t.”

He went on to note how politicians in America are calling for Venezuelans to get “temporary protected status” and cited a Brookings Institution report predicting a crisis in their country “could create 8 million refugees.”

“That’s even more than the number created by the Syrian civil war,” Carlson said. “It’s a disaster.”

“I’ve watched as the left, the neo-cons, Bill Kristol and friends, Barack Obama, Samantha Power, Hillary Clinton and George W. Bush toppled dictator after dictator, leaving smoking craters in their wake, ” Carlson said. “Why wouldn’t our overriding concern be a wave of refugees coming across our border?”

But Tafuri maintained that the answer was still regime change.

Carlson made it clear that he was not defending Maduro or the Venezuelan government, but simply questioning the degree to which the United States should be involved in the conflict.

“Why should the United States bear the burden of socialism?” Carlson asked.