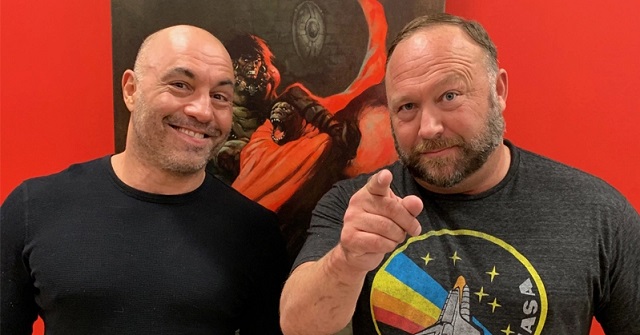 Radio host Alex Jones’s interview Wednesday on the Joe Rogan Experience has already amassed over four and a half million views.

The video has 175k upvotes versus only 6.2k downvotes.

“Alex Jones” was the number one trending topic on Twitter on Wednesday and their video was blocked from appearing on YouTube’s “trending” tab.

The two covered a host of topics and spoke together for over four and a half hours. If you don’t have time to watch it all, check out the JREClips channel for shorter segments.

It’s absolutely insane that the limp-wristed, petty tyrants controlling Big Tech coordinated together to ban this man from the internet because they disagree with his political views.

He needs to be given his channel back and the petty tyrants who banned him need to be prosecuted for working to undermine the First Amendment and illegally interfere in our elections.

Contrast Jones’s interview with Rogan’s interview with New York Times hack columnist Bari Weiss, a fake “conservative” know-nothing pushed by the establishment who works to limit the scope of acceptable debate and smear opponents of the powers that be.

Her interview was downvoted to hell and nearly every comment was making fun of her.

People are sick and tired of the media’s fake, controlled opposition leaders and banning us all is not going to stop what’s coming.