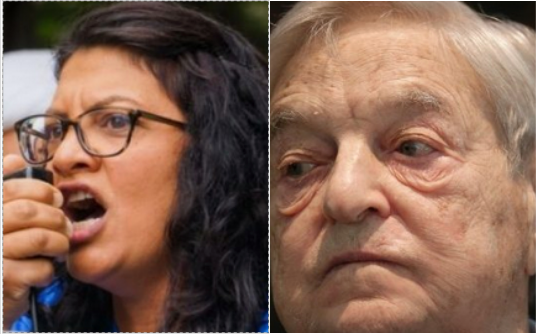 “Newly elected Democrats are more radical than their predecessors. Lowlife Democrats like Rashida Tlaib and [Alexandria] Ocasio-Cortez, [D-N.Y..,] have no respect for the rule of law. They abhor the constitution and the Judeo-Christian values that shaped this great nation. If we continue electing socialists, Muslims and pro-open border politicians who refuse to enforce our laws and protect our sovereignty – we will lose more American lives and eventually lose our country,” he wrote.

Rashida Tlaib received $68,307 income from a “Leadership in Government Fellowship” in 2017. And George Soros’ Open Society Foundation listed an expenditure of $85,307 for Tlaib. A Soros spokesman said her assignment was to focus on increasing civic participation of “disenfranchised urban communities of color.” Tlaib ultimately collected $225,180 from Soros’s organization throughout 2016 and 2017, according to the group’s tax forms,” the Free Beacon reported.

Freshman Democratic representative Rashida Tlaib (Mich.) paid herself tens of thousands of dollars from her campaign’s funds during the midterm elections, filings with the Federal Election Commission show.

Tlaib, who was elected to the House last November, began paying herself on May 7, 2018, from Rashida Tlaib for Congress, her campaign committee, and averaged $4,000 per month outside of August, which included two checks of $3,000 each.

“If the candidate wins the primary election, his or her principal campaign committee may pay him or her a salary from campaign funds through the date of the general election, up to and including the date of any general election runoff,” FEC provisions state. “If the candidate loses the primary, withdraws from the race, or otherwise ceases to be a candidate, no salary payments may be paid beyond the date he or she is no longer a candidate.”

An FEC spokesperson said that a candidate can pay themselves after the general election only for activity that occurred up to the day of the election.

Following the general election, Tlaib cut herself a $2,000 check on Nov. 16 and disbursed $15,500 to herself on Dec. 1, which was well above the average of what she was paying herself during the campaign.

“On its face, it looks like the $2,000 payment on November 16 might be for the candidate’s salary for the first two weeks of November,” an election law and government ethics lawyer told the Free Beacon when asked about the payments. “But given that the election occurred on November 6—i.e., part-way through the first November pay period—I am surprised that this last payment wasn’t prorated. In other words, Tlaib stopped being a candidate halfway through this period, but it appears that she kept collecting her full salary as if she was still a candidate throughout the full first two weeks of November.”

“The $15,500 payment is interesting. It’s not 100% clear what she’s doing, but what she may have done is to low ball her earlier payments for political purposes (at $2k), knowing full well that she would make up any difference at the end by giving herself a lump sum payment,” the lawyer continued. “That would let her skirt negative publicity, of the sort that Alan Keyes generated when he paid himself a sizable salary. An after-the-fact, lump sum payment cuts against the purpose of the rule, which is to help the candidate pay for daily living expenses while campaigning.”

Tlaib’s campaign did not respond to requests for comment on the payments.

During the campaign, Tlaib said that she had taken a leave of absence from her job at the Sugar Law Center, a Detroit-based economic and social justice organization, and cut her hours down to seven per week. The now-congresswoman was paid $28,712.79 from the law center up until May of last year—when the payments from the campaign started—and collected $42,500 salary in 2017, according to her financial disclosure forms.

Tlaib also reported a $68,307 salary for a “Leadership in Government Fellowship” in 2017 but did not disclose the name of the organization who provided the funding for the fellowship, as required by the U.S. House of Representatives Committee on Ethics.

The Washington Free Beacon reached out to George Soros’s spokesperson in December and were provided copies of tax forms for all entities that are run by the liberal billionaire and make up his Open Society network.

The amount that Soros’s group reported paying out to Tlaib on its tax forms, $85,307, differs from the amount Tlaib reported on her financial disclosure—$68,307—for her leadership in government fellowship.

“Rashida Tlaib was awarded a Leadership in Government fellowship from the Open Society Foundations in the fall of 2016,” Jonathan Kaplan, Soros’s spokesperson, told the Free Beacon at the time. “Her project: to focus on increasing the civic participation of disenfranchised urban communities of color. When Ms. Tlaib informed us that she was planning to run for Congress, we mutually agreed to suspend her fellowship and no further payments were made.”

Kendra Arnold, the executive director of the Foundation for Accountability and Civic Trust, a government watchdog group, said that the payment was “problematic” given that candidates are required to disclose the source of their income.

“Identify the source by naming the organization, corporation, or other entity making the payment. It is not necessary that individual clients of a business be named, only the business itself,” the manual states. Tlaib did not report that it came from Soros’s Open Society Foundation.

Tlaib ultimately collected $225,180 from Soros’s organization throughout 2016 and 2017, accordingto the group’s tax forms.