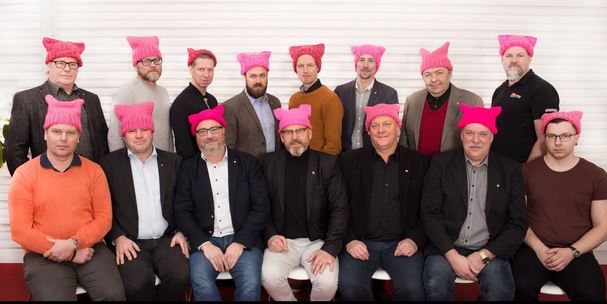 “The smallest worm will turn, being trodden on” -William Shakespeare, Henry VI, Part 3

Browbeaten by feminists and blamed for every ill under the sun, liberal men have had enough.

In an essay for Literary Hub, titled “MIA: The Liberal Men We Love,” February 27, 2019, Ohio Wesleyan University assistant professor of English Amy Butcher blames — you guessed it — “fascist” Donald Trump for relationships between “liberal” women and “liberal” men being “torn apart”. The women, of course, are not at fault — not in the least.

More ominously, Butcher sees in the revolt of liberal men, the menace of fascism.

In other words, if men — liberal or not — don’t COMPLETELY agree with, support, and cheer whatever women do and say, they are Trump-infected fascists.

The essay begins with Butcher’s supercilious characterization of conservative men as “men who wear lobster-printed pants, the men from Connecticut, the Young Republicans of America with their gelled and parted hair”. Below are excerpts from the article:

To a certain extent, we expected it from the men who wear lobster-printed pants, the men from Connecticut, the Young Republicans of America with their gelled and parted hair, their summers in Nantucket, their LL Bean slippers worn on the porches of fraternities, 2pm on a Monday. But when my friend pulls me aside in a hotel bar and tells me it’s happening to her husband—a man who donates annually to NPR and voted twice for Barack Obama, who has a degree in Art History and works for a non-profit—neither one of us knows what to say.

We speak of it like an infection: has it spread to your household yet? ….

Everywhere across America, liberal unions once so strong in love—relationships founded on mutual respect and trust and commitment and loyalty—have found themselves upended, or at the very least foundationally rocked, by the political escalation as it relates, perhaps most specifically, to womanhood and gender.Twenties or thirties or forties, children or no children, married or engaged or committed via long-term relationships: I have met more women than I can count in these past three weeks alone who have confided, in low voices—or once shouting, disbelieving, desperate, we have three children, one woman cried to me—of the disruption in their own home.

Of men—previously, pleasantly, progressive—rising up with unprecedented hostility, anger, abandon, and resentment…. Who is it that said that when fascism eventually comes to America, it will be draped in the flag and holding the cross? I think it is worth adding that it will wear the face you love.

My husband worries about our daughter, she told me recently. That I’m only teaching her she’s a victim.

One day, while she was picking their children up from daycare, he burned a handful of her possessions: her Nasty Women shirt, her Hillary Clinton pins.

My husband filed for divorce, another confided a few days later. He said he loved me and shared in some of my frustrations, but “could no longer tolerate,” he said, the level at which I felt them.

Hours later, another wrote…My fiancé called off the engagement…. He loves me—he’s sure, and I believe him—but he’s “overwhelmed” with everything and “doesn’t know how to comfort me” and “doesn’t love who I’ve become.” …

It would be easy, I suppose, to dismiss this phenomenon as the manifestation of what has long been present, if buried under the surface. A friend theorizes that these men, on some level, actually hate women, have always hated women, and she is not persuaded when I cite their mothers, whose relationship they value, whose strength they find a pillar. There’s a difference between loving a mother, she tells me, and seeing a woman as your equal.

But I knew these men—I loved one myself—and they are far from misogynistic monsters. They are far from Trump supporters. These men, on the contrary, comprise a particular slice of American males: they are men who did not vote for nor support Donald Trump, but are reticent to admit his behavior, rhetoric, and policies are as outrageous and offensive—downright threatening, maddening—as their female partners perceive them to be. These are, make no mistake, men who wholly sought us for our strength, our independence and education. The jobs we held or coveted. The degrees degreed in our name. Our passions and pursuits and our can-do, want-it-all attitudes. They work as medical researchers or in the arts, in teaching or social work. They queue up the Saturday Night Live skits that humiliate Trump, to consume with our coffee on Sunday mornings, but find it unpalatable and unpleasant that our resentment and our fears linger long into the workweek.

Perhaps it was sexy, initially: how they saw in us an equal. But how quickly we lose our status when we as women are angry or upset, frustrated beyond belief, when we add our voice to the chorus of #metoos or feel daily symptoms borne of helplessness….

I’m noticing, admits another, that a lot of liberal men especially are finding it difficult to deal with the current feminist movements.

I’m frustrated and embarrassed, my boyfriend of three years said to me, with how worked up you are. He didn’t find palatable my rage, the anger I felt for Trump, for the men and women who voted for him, was in fact embarrassed that I led 90 students from my small Ohio university through the streets of Washington with half a million Americans. We’d ridden through the night on a Greyhound—some of my best and brightest undergraduates—and when I returned, delirious for sleep but feeling righted, in some small way satiated, he stood there in the hall and told me he was overwhelmed.

What was the flapping of a wing in Washington became a tornado in our own homes: the exact formation and path dependent wholly on one man, miles east, in orange, his appendages beating furiously, his colors outlandish and embarrassing….

Perhaps no man is capable of understanding, truly, what is always on the line when you are a woman, and how Trump and his toxic rhetoric threatens so very much of it. Perhaps no man can recognize the sinister in Trump’s threats….

In my backyard, in my America…[is] a mindset so wholly shaped by gendered bias that…a man, even a progressive one, automatically and subconsciously conflates feminists or a rise in feminist outrage to a threat to the collective male contingency/population.