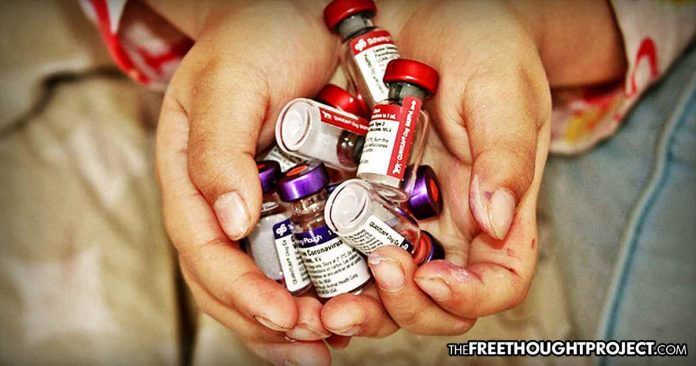 Last month, measles hysteria came to a head as every single mainstream media outlet across the country ran with stories pumping fear over some non-existent epidemic. Headlines like “For God’s Sake! Vaccinate Your Children!” and “Measles is on the rise. But telling anti-vaxxers they’re stupid won’t fix it” have run constantly since last month as the media and the government wage a war on those who advocate for vaccine safety and informed consent. There was one headline, however, that was the opposite of these and went entirely under the radar.

“Vaccines given in Kentucky, Ohio and Indiana causing infections,” read one headline that was suppressed to the deepest darkest depths of the search engine algorithm. After all, it’s hard to foster fear over a non-existent epidemic to encourage people to vote away their right to informed consent when the very medicines being mandated are found to be contaminated and causing infections. But that is exactly what happened.

Last month, the health department in Kentucky found out that vaccines for the flu, whooping cough, and hepatitis A not only weren’t working but they were infecting people.

As WKRC points out, the company Location Vaccination started providing vaccines for businesses in Kentucky, Ohio and Indiana in September. Shortly after, some people started noticing swelling and lumps at the injection site.

Only after multiple people across three states began complaining of infections did the health department step in and realize that the vaccines had all been contaminated. They had been improperly stored which led to this contamination.

The health department is now warning people in these states, who have received one of these vaccines, to be on the look out for infection as symptoms can show up three months after getting the shot.

WKRC reports, if your business worked with Location Vaccination, you should give your employees a heads up, and if you live in any of the three states, call the Kentucky Health Department immediately at 502-564-3418.

Ironically enough, the health department is urging all those who were vaccinated by this company—that may have infected them with contaminated vaccines—to get another round of shots.

Even if you don’t live in one of these three states, this is a perfect example of why mandatory vaccinations are a terrible idea. Not only do people react differently to different medicines, but these medicines are manufactured and administered by humans—who make errors—a lot.

Nonetheless, currently, across the country, there are over 100 bills filed in 30 different states proposing to expand, restrict or eliminate vaccine informed consent rights.

Ironically enough, Kentucky and Indiana both have laws proposed for these purposes—where the infections originated.

While there are certainly some outlandish claims based on complete nonsense made by those who oppose vaccinations as well as the rabid pro-vaxxers, there are very real reasons to advocate for informed consent. No one here at TFTP is telling anyone what to do in regard to vaccinations. We are however, advocating for safety at all levels of this process, and a “one size fits all” model is not safe.

Nevertheless, those who promote vaccine safety are increasingly being treated as outcasts and lawmakers and media alike are calling for them to be silenced. Sen. Richard Pan, D-Sacramento, who has sponsored mandatory vaccine laws throughout his career came out last month to threaten the speech of those who question forced vaccination.

In a letter to the Attorney General of the United States, Pan wrote that the “deliberate spread of vaccine information discouraging vaccination” requires the surgeon general to “stop this attack on our nation’s health by addressing the spread of vaccine misinformation.”

Even the Association of American Physicians and Surgeons (AAPS) opposes the idea of government forcibly medicating society against their will.

“AAPS does not oppose vaccines. AAPS has never taken an anti-vaccine position, although opponents have tried to paint that picture. AAPS has only attempted to halt government or school districts from blanket vaccine mandates that violate parental informed consent.

Whether or not you agree with a parent’s decision to vaccinate their child is irrelevant. While there will likely be many folks cheering on the state in these situations of forced medication, how you feel personally about vaccines should never lead to a loss of freedom. No person should be forced by government regulation or societal pressure to receive any medication or treatment, including vaccines, against his or her will.

As long as we focus on forcing people to vaccinate, instead of on the reasons people are scared of vaccines, nothing will ever change. Vaccines will continue to cause harm and people will continue to lose freedom.

In 1988, largely due to vaccine makers lobbying the government to alleviate their responsibility and liability for damages caused by their vaccines, The National Vaccine Injury Compensation Program (NVICP) was established. It has cost the U.S. taxpayers over three billion since its inception.

After an uptick in lawsuits over unsafe vaccines in the late 80’s, the vaccine manufacturers essentially held the government hostage and threatened to stop making vaccines unless the government took on responsibility for vaccine injury lawsuits — and NVICP did just that.

You can actually prove that you or your child were harmed from a vaccine yet the vaccine maker is completely shielded from liability. Even if you are awarded monetary compensation through the NVICP, the taxpayers are put on the line, NOT the vaccine makers.

This removal of liability has created the incentive to turn out new vaccines with very little testing, as the companies don’t have to worry about financial hardships for injuring people, which in turn has shaped the situation that we find ourselves in today. In the last 2 decades, we’ve witnessed a near 300% increase in the number of CDC recommended vaccines.

Just imagine the uptick in “recommended vaccines” that would occur if these mandatory vaccination laws pass across the United States. The result of a growing list of vaccines, coupled with the utter lack of incentive for safety, could have catastrophic consequences.

Instead of pumping fear over 159 measles cases, the media and government alike should be revisiting the NVICP and return the burden of safety back to those responsible. This would foster an environment that would force pharmaceutical companies to keep safety as a priority, thereby reducing harm. Then, and only then, will these so-called “anti-vaxxers” begin to trust any of their products.