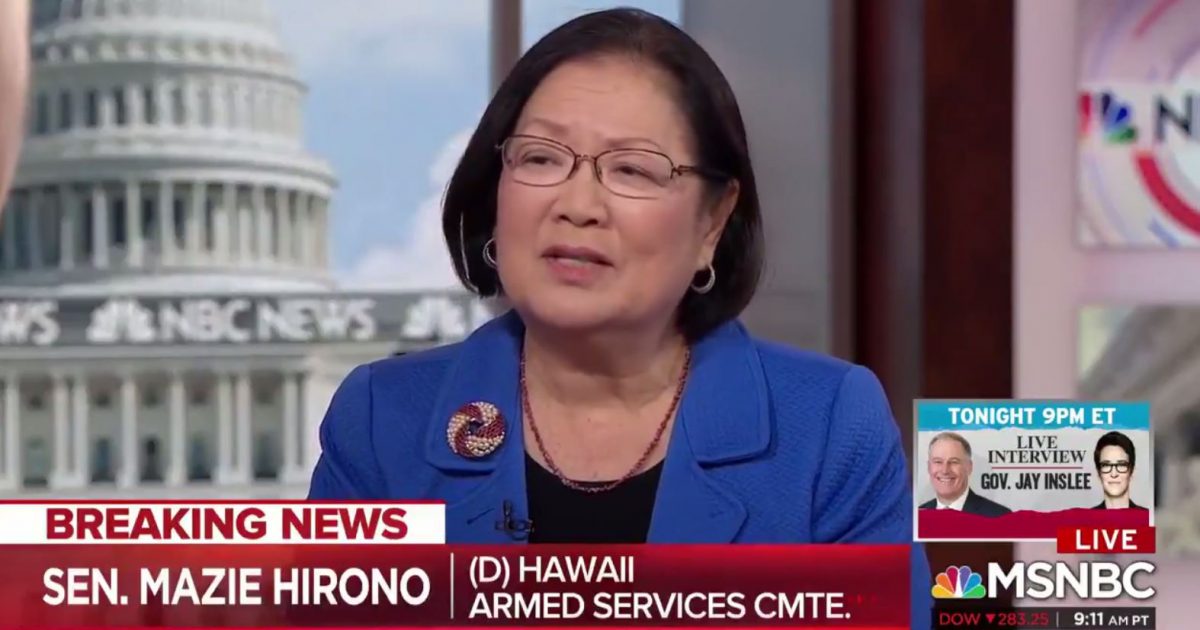 “Well someone asked me whether we were trying to get rid of air travel, I said, ‘well that’s going to make it hard for Hawaii.’ But what the Green New deal stands for is a recognition that climate change is happening, not sticking our head in the sand. So what’s really crazy is Trump and all his minions and his ilk who think that global warming and climate change is not happening and they’d rather stick their heads in the sand. They know zero in terms of what they would propose and all they can do is mock and attack, and I think that is a crazy position because they are denying the science behind climate change,” she said.

The answer was in response to a joke she made about getting to net-zero emissions in ten years, Breitbart said.

“We set a goal to get to net-zero, rather than zero emissions, in 10 years because we aren’t sure that we’ll be able to fully get rid of farting cows and airplanes that fast,” she joked.

But it seems that Hirono and her fellow Democrats have already jettisoned science with their support of the measure.

As we and others reported, Patrick Moore, a co-founder of Greenpeace who happens to hold a PhD in Ecology, scorched “pompous little twit” Alexandria Ocasio-Cortez and explained that her Soros-supported plot to destroy the U.S. economy for generations of Americans, could actually eradicate all life on Earth if it were followed through to completion.

Getting rid of all greenhouse gases, he explained on Twitter, “…would mean removing all H2O vapour and all CO2 which would mean the eradication of all life on Earth.”

On top of that, the measure would cost more money than currently exists on the planet.

According to estimates, the Green New Deal would cost $93 trillion — which amounts to $650,000 per EVERY American family!

To give you an idea of how flat out stupid this is, the whole world’s gold reserve is only worth about $8 trillion. As to paper money in general, the CIA says there is about $80 trillion in the world. The WHOLE world has less money than the Green New Deal would cost.

Which apparently means that Hirono and her fellow Democrats SUPPORT eradicating all life on Earth and spending every dime on the planet in the process.

This, by the way, is the modern Democrat Party.