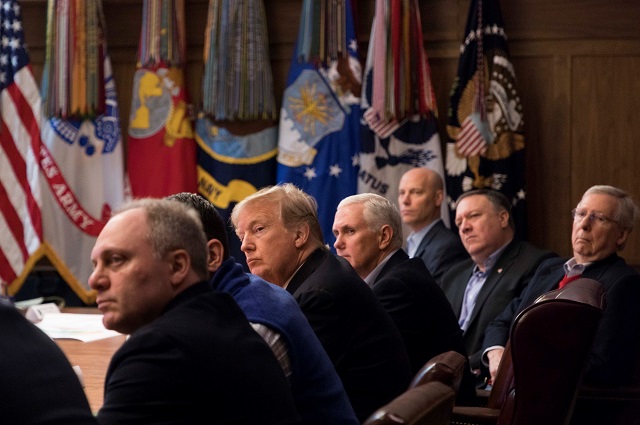 You can always count on Republicans to undermine their own base in service of their donors.

Senate Majority Leader Mitch McConnell said on Monday that he expects a resolution blocking President Trump’s emergency declaration to pass the Senate, but does not believe lawmakers will get enough votes to override the president’s veto.

“I think what is clear in the Senate is that there will be enough votes to pass the resolution of disapproval, which will then be vetoed by the president and then in all likelihood the veto will be upheld in the House,” McConnell said while speaking to reporters in Kentucky, cited by the Hill.

The Senate will vote on the resolution before lawmakers leave town on March 15 for a week-long recess. The resolution is expected to successfully pass the Senate with 51 votes, as Republican Senator Rand Paul announced over the weekend that he intends to vote to block Trump’s emergency declaration. Sens. Susan Collins, Lisa Murkowski, and Thom Tillis have also said they will vote for a resolution of disapproval.

McConnell added that while he was supporting Trump’s emergency declaration, he was “hoping he wouldn’t take that particular path.”

“Yeah I am,” he said, asked if he was concerned about the precedent set for a Democratic president. “That’s one reason I argued obviously without success to the president that he not take this route.”

McConnell said he’d support Trump’s national emergency in order to get him to sign the horrendous open borders bill (which banned him from building the wall). Now he attacks him over it. Truly hilarious.

Don’t let the media blame Rand Paul for this. He’s consistent on his whole “principles” shtick and he’s only one vote. They need 60 votes to pass this resolution.

Trump signed the horrendous open borders bill into law when he could have easily just vetoed it and demand it be changed. Rand Paul was one of only 16 Senators who voted against it.

We all knew this was coming.

No, the goal of a national emergency is for Trump to scam the stupidest people in his base for 2 more years. https://t.co/6DQSkqxV8h

The goal is to get Trump's stupidest voters to say "HE'S FIGHTING!" No he's not. If he signs this bill, it's over. https://t.co/6DQSkqxV8h

To declare a national emergency, Trump will now have to argue that a bill HE SIGNED was unconstitutional.

Ask your new AG if this is a good idea. https://t.co/VBV1u1GhQD

There's no coming back from this. No "emergency" or presidential powers will allow him to build the wall, ever, after he signs this bill. Trump has just agreed to fully open borders.

President @realDonaldTrump signs the Declaration for a National Emergency to address the national security and humanitarian crisis at the Southern Border. pic.twitter.com/0bUhudtwvS

There’s no sugarcoating it.