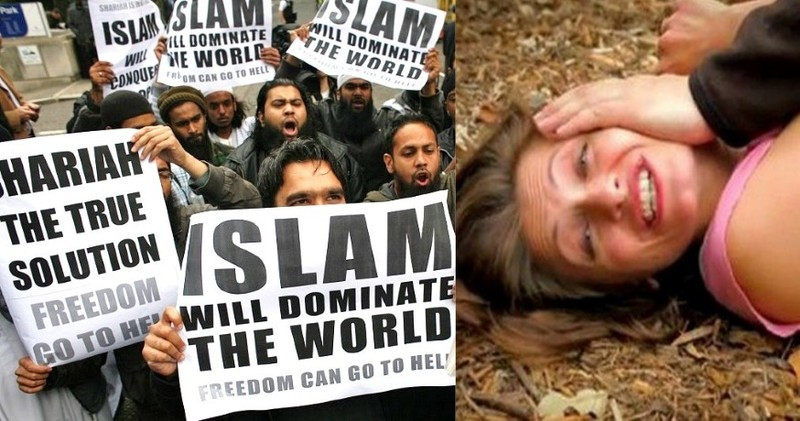 In his book, The Strange Death of Europe, Douglas Murray said,” The desire to continue to feel yourself guilty arguably finds its end point in modern European liberal societies: the first societies in human history who, when they are hit, ask what they did to deserve it.  For unassuageable historical guilt carries over into the present.  It makes Europeans the guilty party even when they actually are hit, or worse. Several years before the latest surge in migration, the left-wing Norwegian politician Karsen Nordal Hauken, a self-described feminist, anti-racist and heterosexual, was brutally raped in his own home by a male Somali refugee.”

Horrendously, the very people who plead for more refugees remain in gated communities to ensure their daughters and wives do not face the rampant rapes and molestations across all European countries invaded by immigrants.  All politicians stand away from and above the violence.

What kind of violence?  Please examine these few examples:

Mourtala Madou, a 33-year-old illegal immigrant from Niger, has been sentenced to life in prison for stabbing to death his 34-year-old German ex-girlfriend and decapitating their 21-month-old daughter at a subway station in Hamburg.

The grisly crime drew renewed attention to Germany’s spiraling epidemic of stabbings and knife violence, which has raged since Chancellor Angela Merkel allowed into the country more than a 2 million mostly male migrants from Africa, Asia and the Middle East.

The double murder in Hamburg occurred the morning of April 12, 2018, one day after a family judge denied Madou (also known as Mado Bido M. or Mourtala M.) joint custody of his daughter. Madou followed the mother, Sandra P., and their toddler, Mariam, into the Jungfernstieg station in downtown Hamburg. In front of many passers-by, he opened his backpack, pulled out a knife and stabbed his stroller-bound daughter in the abdomen. He then slashed her neck and severed her head. Madou subsequently plunged the knife into Sandra P.’s back and cut through her vital organs. She died less than an hour later at a nearby hospital.

During interrogation by police, Madou said, “This is my child. This is my blood. The mother separates me from the child. Then I separate the child from her.”

Police and prosecutors had initially tried to conceal from the public that Madou had decapitated the baby, but a commuter in Hamburg — who happened to arrive at the subway station moments after the attack filmed the scene on his phone. “Oh my God,” Daniel J. can be heard saying in English. “It’s unbelievable. He cut off the head of the baby.”

Heinrich Kordewiner, a blogger from Hamburg who discovered the video on Daniel J.’s Facebook page, uploaded it to YouTube. Hamburg police subsequently arrived at Kordewiner’s apartment with a search warrant, and confiscated his computer, mobile phone and other electronics, allegedly to find “evidence” of the “crime” of uploading the video.

Police and prosecutors have insisted that their silence about the child’s decapitation has been out of respect for the dignity of the dead. Others, however, have accused German authorities of censoring information about growing lawlessness — including spiraling knife violence — to “preserve civil peace.”

Knives, axes and machetes have become weapons of choice for immigrants in Germany, which has some of the strictest gun laws in Europe. People armed with knives, axes and machetes have brought devastation to all of Germany’s 16 federal states. Knives have been used not only not only to carry out jihadist attacks, but also to commit homicides, robberies, home invasions, sexual assaults, honor killings and many other types of violent crime.

Daily occurrences in European cities via refugees give asylum:

During my research for Part 6 of this series, I am looking at four pages of this kind of violence to Europeans who have been forced by their leaders to accepts these 21st century barbarians or at best, savages from Africa.

The rape sheet on my desk looks like a ticker-tape listing spewing out of a machine of women raped by Muslims and Africans.  It’s what they do; it’s how they operate; it’s their culture. It’s become Europe’s noose around Europe’s neck. Brought to Europeans by their leaders!  Murray makes it clear in his book.  He documents everything.

Do we want this kind of America where rapes, jihad and violence to anyone who isn’t Islamic, occur in our cities every minute of the day?  Do we want the violence of multiculturalism and diversity where we face certain societal suicide and death to our citizens?

If we maintain our present course, none of us will be safe from this immigration onslaught of America.