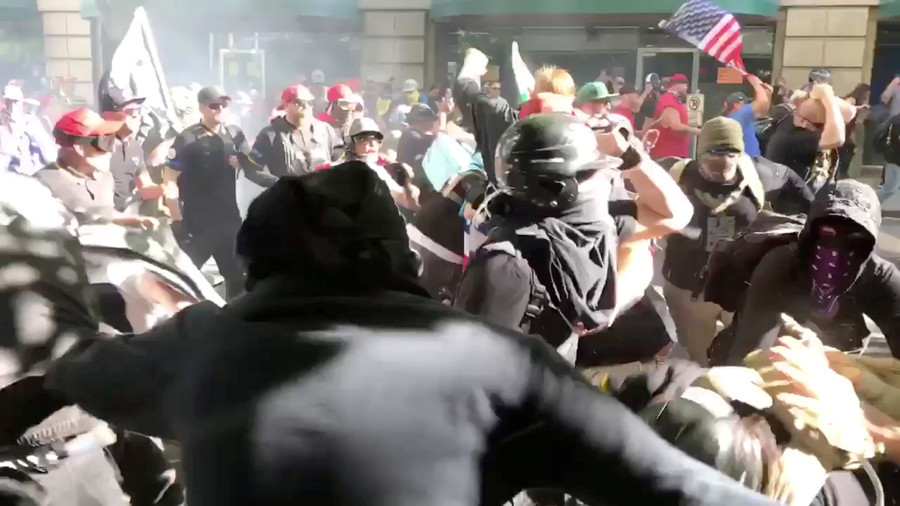 For the first time in years, the drumbeat of civil war has become audible across the United States. The nation looks destined to repeat history thanks to a media that is no longer able to objectively perform its job.

The predominantly left-leaning US media has just entered its third consecutive year of open warfare against Donald Trump. This non-stop assault risks aggravating political passions to the point where ‘Trump Derangement Syndrome’ snowballs into something completely beyond our ability to control. Like full-blown Civil War.

Over the weekend, the Washington Post, one of most prominent serial producers of partisan agitation, published an article entitled, ‘In America, talk turns to something unspoken for 150 years: Civil War’. The piece, which deftly places Democrats above the fray, opens with the following whiff of grapeshot:

CNN Asks What Would Happen If Trump Refuses to Accept Defeat in 2020 https://t.co/Rw1r0TqUrz

With a level of audacity and self-righteousness that has become a trademark of the Left, not once did the article float the possibility that just maybe the mainstream media is complicit in the ongoing deterioration of political discourse, or that the Democrats are just as much to blame as the Republicans for the political fallout that now presents a grave risk to the Republic.

As many knowledgeable Americans will openly admit, battle lines have been drawn across the political and cultural frontier. This division is perhaps most conspicuous on social media, where friends and family who disagree with our political worldview get the ‘nuke option’ and are effortlessly vanquished (‘unfriended’) with the push of a button. This is a worrying development. The real danger will come when Americans from both sides of the political divide stop talking and start erecting electronic barriers around their political belief systems. Not even family members are spared from the tumult; just because people share the same bloodline does not automatically mean they share the same political views. America, though still green behind the ears, may understand that fact better than many other countries.

The United States has taken part in its fair share of military conflicts over the years, but its deadliest war to date has been the one that pitted Americans against each other. The so-called Civil War (1861-1865), waged between the North and South over the question of Southern secession from the Union, resulted in the death of some 620,000 soldiers from the Union and Confederate armies (and possibly as high as 850,000, according to other estimates).

Put another way, more Americans died in the Civil War than in all of the country’s other conflicts combined. For a country that has been at war for much of its existence that is a sobering fact.

With that historical footnote in mind, the mainstream media should better appreciate its responsibility for presenting an objective and balanced depiction of modern events. Yet nothing today would suggest that is the case. One need only look at the way it has blotched recent politically charged events – like the Covington High School and Jussie Smollett scandals, not to mention the ‘Russia collusion’ hoax – to say that something is seriously out of whack inside of the Fourth Estate. The muzzled mainstream media has simply lost its mind over Donald Trump and can no longer perform its duties with any discernible amount of objectivity.

Indeed, the US leader continues to serve as a piñata for the agenda-driven media, which takes daily swings at him and his administration – and despite the fact that his popularity remains very high among voters. Only on the fringes of the media world, in the far away land of Fox News and Breitbart, will the reader find level-headed reports on the American president. This is not to suggest, of course, that Trump is beyond criticism. Not at all. There is a lot not to like about the 45th president. At the same time, however, to assume that Trump and his administration is the root of all evil, as the media would lead us to believe, is not only ridiculous, it is outright dangerous.

With no loss of irony, a good example of the media bias against Trump can be found in the very Post article that frets over the outbreak of another Civil War. While everyone knows that it takes two to tango, you would never guess that by reading this piece. In the sheltered world of the Liberal-dominated media, ‘tango’ is a solo event where the political right is portrayed as engaged in a dance with itself, while the political left watches – innocuously, of course – from the sidelines.

Michael Cohen, for example, Trump’s turncoat personal lawyer who committed perjury by lying to Congress, was quoted high in the article as saying, “Given my experience working for Mr. Trump, I fear that if he loses the election in 2020 that there will never be a peaceful transition of power.”

Now that is certainly rich. Ever since Hillary Clinton lost the 2016 presidential election, Washington has been consumed by the Mueller investigation, and amid mindless chatter that Trump is an illegitimate president slated for impeachment. In other words, the last thing that can be said about the Democrats is that they facilitated a “peaceful transition of power.” In fact, they have hobbled Trump and his administration ever since he entered the Oval Office.

Another pro-Liberal voice dragged into the Civil War story was Robert Reich, who served on Barack Obama’s economic transition advisory board. The Post linked to an article Reich wrote last year where he posited the fictional scenario where an impeachment resolution against the president is enacted, thus kicking off mass civil strife on the direct command of dear leader.

“Trump claims it’s the work of the ‘deep state’”, according to Reich’s febrile imagination. “Sean Hannity of Fox News demands that every honest patriot take to the streets. Right-wing social media call for war. As insurrection spreads, Mr. Trump commands the armed forces to side with the ‘patriots.’”

“The way Mr. Trump and his defenders are behaving, it’s not absurd to imagine serious social unrest,” Reich continued. “That’s how low he’s taken us.”

Now that is some world-class chutzpah. In fact, it is the same self-righteous, ingratiating tone that weaves itself throughout the Post article. In keeping with the mainstream media’s non-stop narrative, Trump and the Republicans are blamed for everything that has gone wrong in the country, while the Democrats come off as little angels trying to piece the fractured country back together.

As already mentioned, Donald Trump is certainly not above criticism. Far from it. But for the mainstream media to place all of the blame for the current political malaise at the Republican’s door is about as responsible as lighting up a cigarette inside of a Chinese fireworks factory. The US media has an unmistakable agenda, and that is to make damn sure Trump is not reelected to another term in 2020. To that end, it has shown a devious willingness to betray all journalistic ethics and standards, which has the effect of increasing the political temperature to boiling point. It then points the finger of blame at the political right for the accumulated pile of pent-up tensions, which are ready to ignite at the first spark.

If the mainstream media continues to slavishly serve just one political master over another, it will only have itself to blame for what comes next. Its prejudiced and agenda-based reporting is a disgrace and really nothing short of a bona fide national security threat.

Robert Bridge is an American writer and journalist. Former Editor-in-Chief of The Moscow News, he is author of the book, ‘Midnight in the American Empire,’ released in 2013.