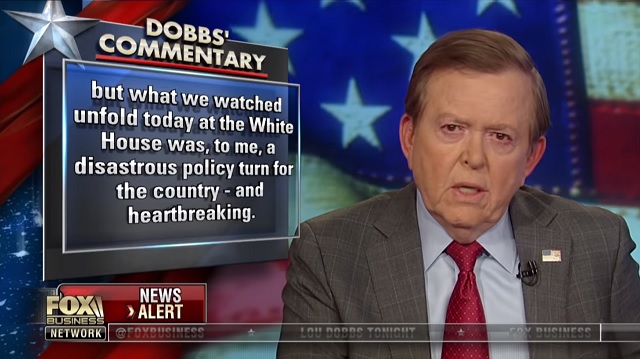 “I’d like to share a few thoughts, however, about what I fear is a new direction for the president and his administration and what could very likely be a catastrophe for the working men and women, small business and entrepreneurs, our middle class, the American family, the very people this president has represented from the moment he announced he would run for the presidency.”

Dobbs brought up the American Workforce Policy Advisory Board meeting at the White House today, which included a number of CEOs like Tim Apple Cook, and said what America watched unfold was “a disastrous policy turn” and “heartbreaking.”

[…]”If this White House thinks that listening to the beguiling prattle of Tim Cook, Tom Donohue, RINO senators like Susan Collins is helpful to this president, then the battle of the forgotten man and woman in this country will be decided by the very establishment that if president ran against, an establishment that spends vast sums of money and energy every single day trying to destroy him and his policies and historic presidency.”

“That Mr. Trump would advance the interest of the globalist elites ahead of our citizens would be a tragic reversal on any day,” Dobbs continued. “But today, on the same day the Commerce Department reported the United States had the largest trade deficit in our history, the same day the president of the New York fed said straightforwardly that economic growth is slowing, that the certain border is being overrun by record numbers of illegal immigrants, it all means the White House has simply lost its way and that the nation’s heart will be, after all, broken by the very same people who brought 50 years of consecutive trade deficit and the export of millions of middle class jobs and who have fed the swamp for decades.”

Losing Lou Dobbs is not a good sign, Mr. President.

Perhaps you should take his advice and keep the promises you made to your voters rather than doing the bidding of people who hate you?