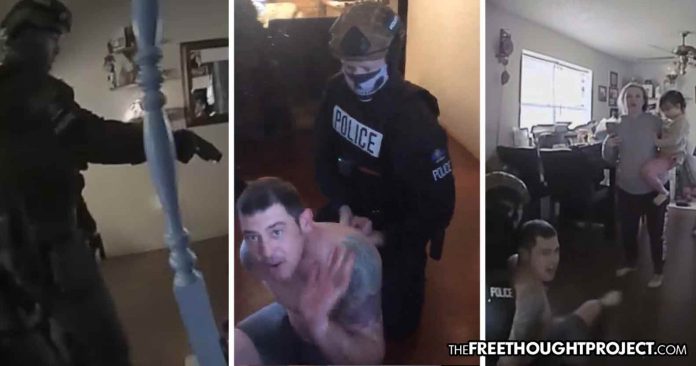 Achille, OK — A video of the Achille police department raiding the home of an innocent family, threatening a husband and wife, and ripping a baby from a mother’s arms was apparently so disturbing that the entire department has been suspended. The actions of the officers may now lead to their termination, according to Achille mayor, David Northcutt.

“There were several issues which some felt arose in which the warrant was delivered, as well as other actions that occurred at the residence,” said Northcutt.

The video footage consists of cellphone video as well as body camera video and paints a disturbing picture of how police act in Achille, Oklahoma.

On Monday, police were serving a search warrant on the home of Bryan Baker after two previous raids on public officials.

Prior to the raid on Baker, Councilman Lynn Chambers was arrested in December for meth trafficking and possession of weapons during a felony, according to KXII.

Also, before Chambers’ arrest, the mayor was arrested in October for possession of meth, first degree burglary, and on Saturday he was severely beaten in an Achille Convenient Store and hospitalized.

Whether or not Baker is associated with the above arrests is unclear. However, the officers who raided his home treated him like he was a mafia kingpin once they smashed in his door and came inside.

As the video begins, Baker is sitting on the ground in his underwear. All the officers are armed with AR-15s which, according to Baker, were pointed at his child’s face, leaving her traumatized.

As the officer—who looks like some Nazi storm trooper wearing a skeleton balaclava—is handcuffing Baker, he keeps repeating “stop resisting…or I am gonna f*ck you up!”

Baker does not appear to be resisting and appears only to be concerned with why police are there as he’s reportedly done nothing wrong.

After Baker is handcuffed, police turn their attention to his wife, who is holding their small child. As police demand the mother “put down the baby,” Baker and his wife ask to see the search warrant.

It is general known that police have to tell you that they have a search warrant and are at your house to conduct a search. However, they only have to show you the actual warrant if you ask to see it. Since Baker was no threat and already in handcuffs and his wife was holding a baby, the search warrant should have been produced.

But it was not.

“Put the baby down cuz you’re next,” says one of the officers to Baker’s wife. The officers then grab one of the mother’s arms and put the cuffs on it before their child is taken from her arms.

The couple pleads with the officers to get their parents who live across the street, so they can watch the child. The video then ends.

According to Michael Coble, who rents an apartment from Baker, police raided his home too and confiscated his legally owned gun. Coble told KXII that police then tried to charge Baker with possession of this gun—despite finding it in Coble’s apartment.

“So they came in there and got my weapon and tried charging my neighbor with it, which I think is cruel. If it wasn’t found in their house, they should have packed up and left,” said Coble, who added that his gun was returned to him after it was used in an attempt to frame Baker.

Both Baker and his wife were brought to the jail but later released as police had nothing to charge them with.

After he and his wife were released from jail, Baker wrote the following statement on Facebook.

Everyone is home no charges watch kxii it will explain everything at ten. I won’t be answering my phone because of the gun pointed in my child’s Face and she needs our upmost attention please respect our privacy. Thank god things will finally get fixed in this town. Although my wife and family were traumatized we are fine and are receiving all the legal help we could ever pray for. Thank you for everyone making sure we were ok today. Justice is finally here for us an our town.

Below is the video that has led to the suspension of an entire police department. Remember as you watch it, that this couple could’ve been murdered had they attempted to protect their home from these armed invaders. Instead of seeing a video of the raid, we would have heard about it from the chief as they likelysmeared the couple as “dirt bags.” Luckily, this was not the case.

Below is the news coverage on the raid.