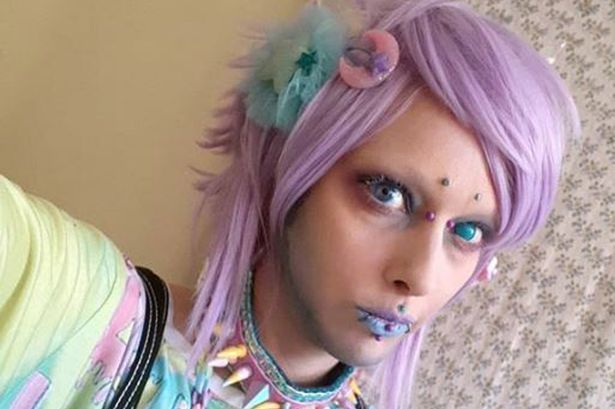 This person has shuned human genders and wants to be accepted as a being from another planet. Who wants to tell him/her (?) that you can’t always get what you want.

From Daily Mirror: Jareth Nebula might live on earth but he firmly believes he belongs on another planet. The 33-year-old, who was born a woman but transitioned to become a man when he was 29, now believes he doesn’t fit into any human gender and is, in fact, an alien.

The barber’s shop receptionist has even had his nipples removed and shaves his eyebrows to “make him feel less human”.

Jareth, who has named himself after David Bowie ‘s character in Labrynth and Nebula like a space cloud, already has 78 stars across his body and hopes to increase this to 333 as “three has always been my lucky number”.

Living alone he now just wants people to accept who he is and admits be would rather be called ‘thing’ or ‘it’ rather than he or she.

Jareth, who legally changed his name four years ago, said: “After coming out as transgender and believing I had finally found myself, I realised I was wrong – I wasn’t male or female, or even human.

“I don’t think or feel like humans. I can’t really explain it to others – I’m simply otherworldly. I didn’t feel comfortable as either gender or even anything in between. I know I’m stuck in a human form and that’s how I’m perceived by others – but to me, I’m an alien with no gender.”

Jareth first felt he did not fit in when he was diagnosed with Ehlers-Danlos syndrome (EDS) – which is a rare lifelong condition affecting connective tissue and resulting in stretchy skin and an increased range of joint mobility. Although he was born with the condition, he was not diagnosed until he was 26.

Nicknamed ‘Mr. Elastic’ by his doctors due to his stretchy skin the condition can cause him chronic pain. Its one benefit is that his skin is wrinkle free, which makes him appear younger.

Jareth, who does not want to disclose his birth name, said: “The condition means I can pop my joints out on purpose, which was a fun party trick when I was a kid. Now I realise why I could do that. My pain in my joints got worse as I got older and I would find it harder to move day to day. I get to a chiropractor once every two weeks and see a physical therapist once a week, as well as smoking medicinal marijuana for the pain – but there is currently no cure for EDS.”

Luckily, Jareth’s work is very accommodating – but he claims his diagnosis made him realise he was completely different from other people.

Although he says he was once a “hyper-feminine female” and modelled in his teens, at 29, Jareth decided he was a trans male. He began taking testosterone injections, started to dress in a masculine way and had surgery to remove his breasts.

But neither gender seemed to fit his personality, so he decided to do further research into alternative gender identification.

He said: “I thought being a trans man would solve all of my issues and inner battles with finding out who I was, but I wasn’t as happy as I expected to be. I felt like I was trying to fit into someone else’s box. I didn’t want to be constrained – that’s when I discovered what agender was. I’d always been obsessed with aliens, too, and what it means to be extraterrestrial, so the idea of being an agender alien fit perfectly as an identity for me.”

Being agender, which is when a person does not identify themselves as having a particular gender, means Jareth does not want to look either male or female, but is happy to be called ‘he’ or ‘him’.

He said: “My family still see me as a trans man, because they don’t understand what agender or alien really means. I have online friends who support me but offline is harder. Not everyone understands – but that’s okay. I don’t expect them to get it, I only want acceptance.”

As well as the difficulties he faces with friends and family, Jareth has also been trolled online by people who disagree with his alien identity.