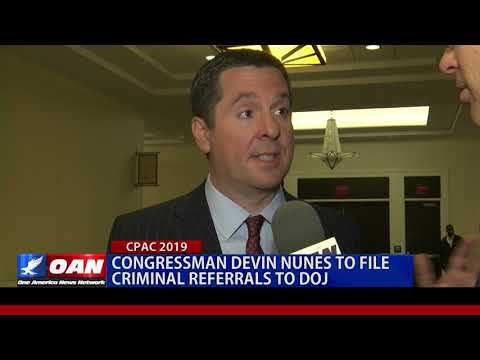 Is this another false hope?

A criminal referral or recommendation is a notice to a prosecutory body, recommending criminal investigation or prosecution of one or more entities for crimes which fall into that body’s jurisdiction.

In the U.S. federal government, agencies that investigate crimes — including the House Intelligence Committee — typically refer cases to the Department of Justice (DOJ) for prosecution at its discretion. The U.S. attorney general heads the DOJ.

Rep. Devin Nunes (R-CA), 45, is a farmer with a Master’s degree in agriculture from Cal Poly, who became a politician. His grandparents were immigrants from the Azores, a tiny group of islands more than 800 miles off the coast of Portugal. (See “The Devin Nunes You Don’t Know“)

Nunes is that rare politician who has not sought to exploit his public office for financial gain. Unlike corrupt politicians like Congresswoman Sheila Jackson Lee with a 2015 net worth of $3.5 million, Nunes’ net worth in 2016 and 2015 was estimated at only $158,001. (Heavy.com)

Congressman Nunes was the chair of the House Intelligence Committee for four years until January 3, 2019. He lost the chairmanship because Americans in the 2018 midterm elections voted a Democratic majority to the House of Representatives. Since then, Nunes still serves on the committee as the senior Republican.

On January 30, 2019, during an interview on Fox News, Nunes said he plans to make criminal referrals as part of an investigation into political bias in the FBI, and that even though he is no longer chairman of the House Intelligence Committee and Democrats have taken control of the House and the committee, that won’t stop GOP investigators from making headway:

One person who has already been criminally referred to the Justice Department was former UK spook Christopher Steele, the  author of the fake “Russian hooker” Trump dossier. Steele was criminally referred in January 2018 by then-chairman of the Senate Judiciary Committee Sen. Chuck Grassley (R-Iowa), and now-committee chair Sen. Lindsey Graham (R-SC) who succeeded Grassley.

Nunes said on January 30 that to this day Congress has not heard any updates from the DOJ on the Steele referral. Referring to Trump’s AG nominee William Barr, Nunes said it will take a new attorney general to come in and “clean” up before any real progress can be made. (Washington Examiner)

“We’re still continuing to get to the bottom of what was happening to the Department of Justice and the FBI, trying to make sure that everyone there is held accountable…either through the courts or otherwise…. We’ll be making criminal referrals on a whole host of topics, most importantly probably lying and misleading Congress.”

“We are preparing a criminal referral that we will present to the attorney general at the appropriate time…for many crimes. The obvious ones that you would know about would be lying to Congress. But we will also be looking at FISA [Foreign Intelligence Surveillance Act] abuse and all the other matters that we have been looking into. It will probably be one large referral….

We’re probably going to be prepared in the next two to three, four weeks — one of the things that’s coming up. So don’t mind all the shiny balls that you see running around Congress here — the so-called new investigations [by current House Intelligence Committee chair Adam Schiff (D-CA)]. Just ignore that.

What you should be out looking for is next week. On March 14, the federal judge down in Florida has ordered the release of depositions by Christopher Steele, who is supposedly the author of the dossier, and David Kramer, who pled the Fifth to this committee. who we know was handling and moving the dossier around to press outlets…. We [House Intelligence Commitee] had not ever interviewed Christopher Steele, and we don’t know what David Kramer would say because he pled the Fifth. So this could be critical. It may be nothing, but it could be critical for our referral. “

Note: David J. Kramer was nominated by President George W. Bush to be U.S. assistant secretary of state for democracy, human rights, and labor, which he was from 2008 to January 20, 2009. Kramer is currently the senior director for human rights and human freedoms at the (John) McCain Institute, which is funded by the Saudis, Rothschilds, and George Soros. Kramer is a central player in how the fake Trump dossier made its way to the FBI in late 2016. He has invoked his Fifth Amendment right not to testify in connection with questions from the House Intelligence Committee about the anti-Trump dossier’s alleged Russian sources. (Fox News)

ISIS Welcomes Biden To Presidency With A Double Suicide Bombing In Baghdad
January 22nd, 2021 The Lid

(VIDEO) Schumer Announces ‘Senators Will Have to Decide if Donald John Trump Incited the Erection’
January 22nd, 2021 The Mental Recession

The most important legal pathway that would allow Trump to reclaim...